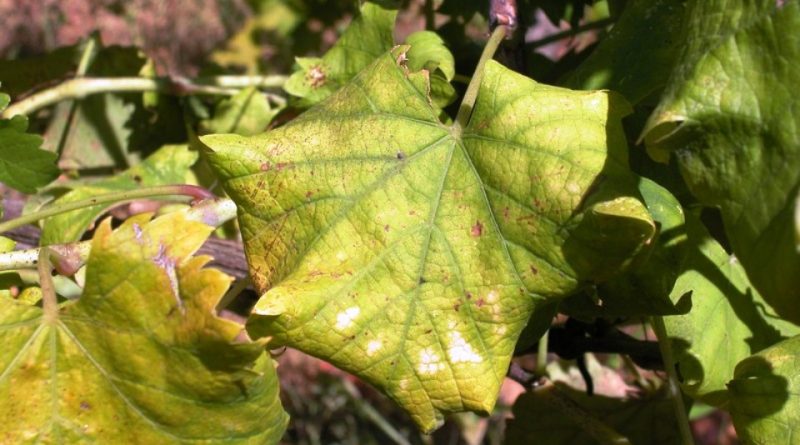 Golden flavescence, abbreviated as FD, is a phytoplasmosis that belongs to the yellowish group of the vine.
The name derives from the golden yellow color that the leaves, the branches and the clusters of white grape varieties take on once affected by this pathology.
The agent that causes the golden flavescence disease is a phytoplasma, which settles in the phloematic tissues of the host causing blockage of the processed lymph and thus inducing an imbalance of the physiological activity of the plant.
At present, Rincote Scaphoideus titanus is the most efficient carrier of the phytoplasma.
Due to its peculiar epidemiological characteristics, FD is the most dangerous since it is a highly epidemic disease.
The characteristic symptoms of this manifestation appear during the summer heat or towards the end of the vegetative cycle (August-September-October), usually during the year following the one in which the natural infection occurred. It is not excluded that in Mediterranean areas with higher temperatures the symptoms may appear during the same year, coinciding with early infections.
Within the vineyard, the symptoms of the affected plants stand out distinctly from the healthy ones due to the lack of buds budding on the fruit head, their scarce, chlorotic, stunted and probibent vegetation.
The leaves have a characteristic yellowing with golden reflections (in the white grape vines) or a lively redness (in the black grape vines). These are chromatic alterations that can affect the entire lamina, including ribs, or only sectors of it.
In some vines more sensitive to the disease, moreover, such as in the Chardonnay, there is a crumpling of the margins of the leaf flap downwards (sometimes the leaves take on a typical “triangle” appearance caused by the folding of the leaf margin on three sides).
In more severe cases, bands of yellow-cream or vinous-red tissue can develop along the main ribs, extending to the internal areas, then evolving into more or less extensive necrosis.
In these cases, necrotic degeneration often occurs at the point of insertion of the laminae and petioles, which disarticulating with extreme ease cause the premature fall of the leaves.
The vegetation thus assumes a bundled appearance due to the shortening of the internodes; the branches, due to the lack of lignification and the rubbery consistency, descend towards the ground with a weeping bearing. The shoots are also covered with small blackish pustules. The disease has serious repercussions on the quantity and quality of production.
Golden flavescence has serious repercussions on the quantity and quality of production due to the abortion of flowers and the drying and pouring of inflorescences. The bunches that ripen unevenly bear heavily shriveled or dehydrated berries, subject to an abundant drop, so much so that during the harvest period you can see many stalks completely free of berries.
The disease spreads at great and short distances respectively for:
– multiplication of infected plant material, i.e. use of infected scions and rootstocks (even if the transmission of the disease to the cuttings occurs in a very low percentage).
– transmission by means of insect vector.
In the current state of knowledge the Scaphoideus titanus Ball. (Rhynchota: Cicadellidae) is the most efficient phytoplasma vector. The transmission is persistent propagation and the insect, after feeding on the phloem of infected vines, has a latency time before acquiring infectious capacity and then spreading the phytoplasma. In fact the latter, through the intestine of the vector, passes into the hemolymph and goes to locate itself in its salivary glands where it multiplies abundantly. The entire process, from the acquisition of the phytoplasma to its transferability by means of the nutrition bites, takes about a month, after which the vector remains infectious for life. The phytoplasma is not transmitted by the ovarian route to the progeny, so from the wintering eggs are born individuals unable to transmit the disease until they have acquired the phytoplasma from infected plants again.

In order to prevent the spread of FD, the following cultivation treatments must be implemented:
– keep the vineyard free of weeds;
– perform balanced fertilizations and irrigations to avoid stress to the plant;
– in cases where it is necessary to replace the plants, always use certified propagation material with a Plant Passport, from controlled nurseries;
– do not leave the pruning residues in the field and in any case remove them before May;
– provide for monitoring with frequent visual checks in the field, starting from the end of May, to identify the youthful forms of the vector and, by means of yellow chromotropic traps, of adults.
In vineyards where the presence of golden Flavescence has been found, in addition to the already prescribed standards, the following is necessary:
– compromised plants must be uprooted taking care to eliminate and destroy them at the same time;
– carry out the chemical fight against the carrier Scaphoideus titanus. The first treatments must be carried out as soon as the presence of the nymphs coming from the hatching of the hibernating eggs and identifiable following accurate visual sampling is ascertained. The hatching usually takes place at the end of May. In this phase, growth-regulating insecticides such as Buprofezin or larvicides such as Indoxacarb, Thiamethoxan, can be used alone or mixed with Clorantraniliprole (Rymaxypyr). For subsequent treatments aimed at adults, whose flights can be identified with the use of yellow chromotropic traps, insecticides such as chlorpyrifos methyl, chlorpyrifos ethyl and Etofenprox can be used. In all cases it will be advisable to alternate active ingredients with different modes of action to avoid the onset of resistance phenomena.
For organic products, the admitted products are Azadiractin A, Pyrethrum Extract and Potassium salts of fatty acids (C14-C18), which can also be used in a mixture.
Note that the disease, which is native to European regions as an endemic disease, did not constitute a problem until the arrival of the Scaphoideus titanus Ball, originating in the Neartico area, where the phytoplasma is not present and therefore S. titanus is a vector of other phytoplasmas such as Ash Yellows, X-Disease and Grapevine Yellows.
The carrier arrived in France in 1955. In Italy it was first reported in Liguria in 1963.