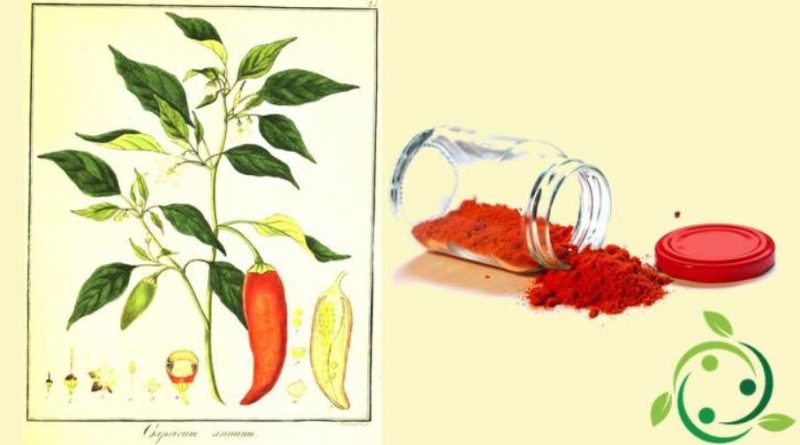 Paprika is a spice derived from some plants of the genus Capsicum spp., Both peppers and chillies.

Origins and History –
The term paprika, in the Hungarian language, refers to some varieties of peppers, classifiable as “sweet”, which are dried, after being freed from the white interior, ground and used as spices.
This spice is also known by the names of red pepper, red allspice or capsicum.
In the cuisine of Hungary, where the best paprika is grown today, this spice became the most important ingredient only around the nineteenth century.
According to popular beliefs, its use was increased as a remedy for malaria and even dates back to the time of Turkish domination (16th-17th centuries). According to a legend, a young Hungarian peasant woman, who escaped from the harem of a Turkish pasha, where peppers were grown, would have taught the farmers of her village how to process paprika.
This spice has had a good diffusion in Central and Balkan cuisine, in dishes such as goulash or which refer to the Gypsy tradition (called “gypsy”), “Hungarian”, Austrian “.
There are many types of paprika, from sweet to very spicy: the “Különleges” is the most delicate, very fine and bright red in color, with a warm and spicy aroma, “Erös paprika” is instead among the spiciest, of brown color, and coarsely ground. All types must be stored in containers protected from light, and consumed quickly because they tend to darken, taking on an unpleasant stale flavor.
In the nineteenth century the Pálfi brothers from Seghedino, removing, at the time of harvest, all the internal veins of the fruit, where capsaicin, the active ingredient that gives the spicy flavor to the pepper, is concentrated, obtained the so-called “sweet paprika”. It must be said, however, that even the so-called “strong” type is not spicy at all, contrary to what one might believe outside Hungary.
It was also the scientist Albert Szent-Györgyi, Nobel Prize in 1938, who helped to enhance this vegetable by discovering, in the pepper, the source of ascorbic acid (vitamin C) that stopped the deaths from scurvy, a disease that had killed thousands of sailors.
Also important is the harvest period which is experienced in Hungary as a joyful rite. On September 8, the women, dressed in bright costumes, pick the peppers in the fields and after having skewered them with needle and thread they make long garlands that hang on special wooden supports or on the walls of the houses.

Description –
Paprika is a spice obtained from Capsicum annum, which includes peppers and chillies, tropical plants native to Mexico, already known in Asia and Africa, but widespread in Europe only in the sixteenth century, after the discovery of the Americas.
Paprika is a spice that is obtained by grinding different types of dried chillies. Its flavor can therefore change according to the pepper used and can be more or less sweet or spicy. Generally, in the real recipe it is expected that both the seeds and the white membrane are removed from the peppers: these are the richest parts of capsaicin, the substance responsible for the spiciness.
There are different types of paprika, but among the most common we find the following:
– Sweet paprika;
– Semi-sweet paprika;
– Pink paprika (which is the spiciest one).
The peppers used can be of various types, depending on the level of spiciness you want to reach. The important thing is to always remember to remove seeds and white parts, because you risk getting an excessively strong and almost inedible spice. For chili lovers, however, it is also possible to find very spicy paprika, capable of inflaming the mouth. The most common and widespread variety also in Italy remains sweet paprika in all cases.

Active principles –
Paprika has an energy value which is equivalent to 282 kcal per 100 g of product. From a nutritional point of view it is made up of: 53.99 grams of carbohydrates (of which 10.34 grams of sugars – mainly fructose and glucose); 34.9 g of dietary fiber; 14.14 g of protein; 12.89 grams of fat (of which 7.77 grams of polyunsaturated, 2.14 of saturated and 1.69 of monounsaturated).
Among the most represented mineral salts we have: calcium, magnesium, phosphorus and potassium.
The concentrations of vitamins A and B (B1, B2, B3, B5, B6), J and k are also high. Instead, the amount of vitamin C is quite small as that of folate.
In addition, paprika also contains antioxidant flavonoids such as alpha and beta carotene, lutein and zeaxanthin.
The most important active ingredient of paprika is however capsaicin, a substance present in the chili pepper and responsible for its spicy flavor. The combination with fructose gives the spice its very particular sweet-spicy, sometimes slightly bitter taste. Capsaicin is also one of the substances that give paprika numerous beneficial properties.

Properties and Uses –
Paprika is a reddish powder, the shades and flavor of which vary according to the types of chillies used. For example, the sweet variant is characterized by a light red color while the spicy one by a very bright and intense red color. In addition, the flavors of this spice are also different depending on whether only the pulp or the seeds are ground. The internal part is in fact rich in capsaicin, the substance responsible for the classic spicy flavor.
The different varieties of chillies used to prepare paprika, as well as the part of the ground chillies, are responsible for its different tastes. The species of chili pepper most used in the production of paprika, as mentioned, is the Capsicum anuum.
Different types of paprika are therefore available on the market, each characterized by a specific color and flavor. Among the most popular non-spicy paprike we have:
– Sweet: bright red color, very intense aroma and sweet taste;
– Fine: light color and sweet taste;
– Kulonleges: bright red color, fine ground and very delicate taste.
The most used types of paprika, with a very strong flavor, are:
– Eros: brown color, coarsely ground and spicy;
– Rosa: rather pronounced taste (unlike what one might think from the name);
– Semi-sweet: bright red color and very intense taste.
It is also possible to find paprike with intermediate characteristics between the previous types.
Paprika, due to its particular composition, has particular properties that affect functions or organs.
Meanwhile, it stimulates the gastric secretion of acids by promoting the digestive process.
The antioxidants contained also play a fundamental role in skin health. They keep it healthy, radiant and prevent the formation of wrinkles. This spice is in fact also used as an ingredient in DIY face masks in combination with honey.
The vitamin A present in this spice promotes cell regeneration by reducing acne lesions.
Paprika helps the oxygenation of the scalp by promoting blood microcirculation. This factor is very important for good hair health and for preventing hair loss. For this purpose it is often included as an ingredient in DIY hair masks.
Recent studies support the usefulness of paprika to treat varicose veins, thanks to its qualitative-quantitative composition.
Vitamin A and carotenoids, contained in this spice, are fundamental for the eyesight. These compounds help the eyes to filter out UV rays from the sun that are harmful to diseases such as cataracts and macular degeneration.
Thanks to the presence of capsaicin, this spice has anti-inflammatory properties that can help alleviate some joint pathologies, such as arthritis and joint pain.
The good content of antioxidants (vitamins, beta-carotene, lutein, etc.) is able to counteract the activity of free radicals. The latter are molecules responsible for some serious diseases, such as tumors.
Contrary to what one might think, chilli is good for pressure. It has been scientifically proven that capsaicin is capable of reducing blood pressure; in fact this substance acts as a vasodilator favoring the flow of blood. Therefore, its regular and moderate consumption is able to relax the blood vessels with beneficial effects on the cardiovascular system.
In addition, paprika can be used to give brown hair natural red highlights.
As always, one must be careful of excesses or particular sensitivities or pathologies.
The use of paprika is contraindicated in sensitive individuals as it could trigger allergic reactions.
In addition, children, pregnant and lactating women should not be administered.
This spice is also not recommended for those suffering from gastritis, cardiac arrhythmias, ulcers and colitis.
It is recommended to consume paprika in moderate doses because it can cause intestinal irritation, diarrhea or constipation (as appropriate).

Preparations –
In order to keep its characteristics intact, paprika must be stored in closed containers away from light and consumed quickly because it tends to darken and acquire an unpleasant flavor.
Paprika has a delicate, slightly bitter, slightly spicy and quite aromatic taste. Its spicy side is very sweet and thanks to this the dishes are enhanced with an aromatic and spicy touch that “neutralizes” the spicy flavor of the chilli pepper. Paprika can be sweet or spicy: in the latter case, the pepper placenta is also ground, that is, the internal part to which the seeds are attached (which are mistakenly considered the most spicy part).
For its particular and unmistakable flavor, paprika can accompany a huge variety of dishes. It can be associated with meat, soups, cheeses, cream, tomatoes and onion. It is also used as one of the main curry ingredients. In the food industry, the sweet variant is used a lot to spice snacks such as chips or to give an even more red color to cold cuts.
In cooking the aroma of paprika develops particularly when it is associated with onion or lard. It is better to avoid cooking it in fat only, without liquids, because it caramelizes undergoing an alteration of the aroma. This spice is also used as preserves, especially bacon or lard.
In the Hungarian culinary tradition it is used in many preparations, particularly in goulash.
It is also present in some Balkan kitchens, in particular in some areas of the former Yugoslavia, where it is an ingredient for preparing ćevapčići.
A particular use of paprika can be that for hair dyeing. In this case, the powder of this spice must be mixed with a rosehip herbal tea and cloves. When the mixture has cooled down, filter everything and apply on the hair for about 15 minutes. Use a cap or a transparent film to wrap the entire hair.
In addition, paprika is also used as a preservative, especially for cured meats and preparations such as lard and bacon, which absorb the aroma.