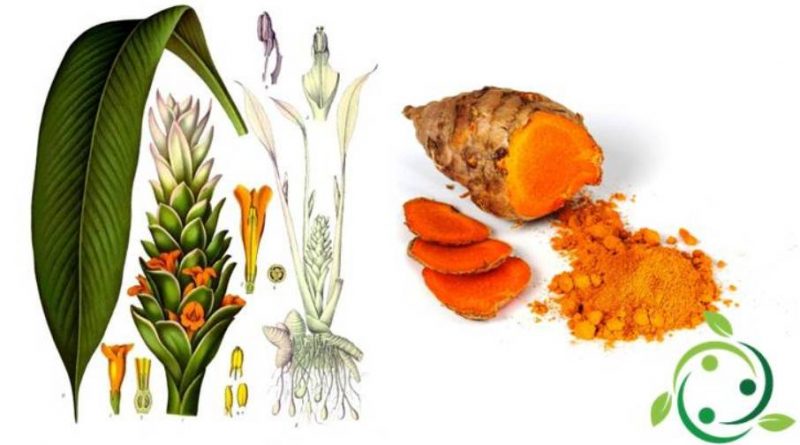 Turmeric or saffron from the Indies (Curcuma Longa L., 1753) is a herbaceous, perennial, rhizomatous plant from which the famous spice is obtained.

Origins and History –
The name turmeric derives from the Sanskrit kunkuma through the Arabic كركم, kurkum and is the spice normally obtained from Curcuma longa, although there are numerous other species attributed to the botanical genus Curcuma.
In English it is called turmeric, in Hindi it is called haldi, in Bengali holud.
The name of saffron from the Indies derives from the color of the spices, which resembles saffron.
Turmeric is a spice known for at least 4000 years, as the Indians already made extensive use of this plant, considered a fundamental spice, linked to Hindu religious rituals for its yellow coloring power, related to the sun. Certain hand-dyed fabrics (robes of Buddhist monks), cosmetics used for weddings and holidays (brides’ hair), curry, are just a few examples of the use of its strong coloring power.
In the ancient oriental tradition, this tropical root was considered very important also for its therapeutic virtues useful for curing all the organs of the body.
According to traditional medicine, its principle, curcumin, would solve heart, liver and lung problems, as well as being effective against memory lapses.
In the kitchen, turmeric, also called Indian saffron or yellow ginger, gives the dishes a spicy aroma, slightly reminiscent of ginger, but more bitter. It is used in practically all Indian meat and vegetable dishes, both in spice blends. It is particularly used in Indonesia and North Africa, which particularly appreciate its pilaf rice colored and flavored with turmeric, as its aroma is reduced in cooking and does not create particular bonds with meat or fish. In Bali, the powder is mixed with coconut milk and lemon grass to season rice.
In our tables turmeric appears camouflaged, it is in fact used industrially as a mustard dye, as well as for certain cheeses and liqueurs.
It may happen to buy it on trips to the East, where it is often passed off as the most expensive saffron, as was the case in the Middle Ages, when it was called “Indian saffron”.

Description –
Curcuma Longa is a plant of the Zingiberaceae family native to Southeast Asia and widely used as spices especially in Indian, Middle Eastern, Thai and other areas of Asia.
The spice of this plant is obtained from the root which is a large cylindrical rhizome, branched, yellow or orange, strongly aromatic, which constitutes the part of greatest commercial interest of the plant.
As with other plants of agricultural interest, different varieties of this species have been developed over time.

Active principles –
The main constituents of the drug are curcuminoids (3-5%), i.e. mixtures of cinnamoylmethane derivatives, such as curcumin, demethoxy curcumin and bis-demethoxicuricurcumin (which is contained only in C. longa). Quantitatively important (3-5%) is the volatile fraction, which mainly contains characteristic terpene compounds such as zingiberene, curcumol and β-turmerone. Also present in the drug, but in smaller quantities, are the Arabic galactans acidic ukonan A up to ukonan D.
As for calories and nutritional values, 100 grams of turmeric contain on average: Calories 354 Kcal, Fat 10 g, Cholesterol 0 mg, Sodium 38 mg, Potassium 2,525 mg, Carbohydrates 65 g, Dietary fiber 21 g, Sugar 3,2 g, Protein 8 g, Vitamin C 25.9 mg, Calcium 183 mg, Iron 41.4 mg, Vitamin B6 1.8 mg and Magnesium 193 mg.

Preparations –
As with all spices, it would be preferable not to buy turmeric already ground into powder, because over time it becomes bitter and earthy, also losing its bright color.
Turmeric can be found on sale in the form of a root, or in powder form.
The root should be kept in a cool pantry, in a dark glass jar to prevent it from being damaged by light. Once cut, it is necessary to keep it in the refrigerator, in the vegetable drawer or in the egg area, in a food bag.
The powder, on the other hand, can be kept in the original packaging, if already packaged, or in a dark glass jar if purchased in bulk. A refrigerator is not necessary: ​​the pantry or a cool place is fine.
In the kitchen, all first courses lend themselves very well to the union with turmeric. The very thin cut white onions, stewed in a pan and blended with a little white wine, completed with turmeric powder, pepper and a pinch of salt, can be a tasty condiment for foods such as gnocchi, short pasta and rice.
Together with peas and aromatic herbs, turmeric can complete a plate of whole grains such as barley, while with a pinch of cardamom, it can be inserted in a legume-based recipe, such as a soup. At the end of cooking, flavor the minestrone and in general soups and vegetable soups.
Turmeric is also used to flavor meat and fish dishes. The classic dish is chicken. It should be diluted in a cup of vegetable broth with a pinch of black pepper and gradually added during cooking.
It can also complement desserts: the full-bodied flavor makes the use of sugars superfluous. In particular, it is indicated with fruit, especially with apples. Peel and dice them and cook over low heat with a little water. Then add turmeric, black pepper and cinnamon. It is an appetizing recipe, with digestive properties and that even those with high levels of bad cholesterol can eat.
As for the uses for health purposes, according to Ayurvedic medicine, a natural anti-inflammatory and powerful antioxidant is golden milk. You must first prepare a dough by mixing boiling water, turmeric powder and a little black pepper. The final result must be a homogeneous compound with a consistency similar to that of very dense sauces. It should be kept in the refrigerator. Half a teaspoon is added to a cup of milk, or even better than a vegetable drink, together with a pinch of pepper and half a teaspoon of almond oil, to be drunk once a day, preferably in the evening before going to bed so as to ensure that the body can benefit from the many curative properties of turmeric during the hours of sleep, which are already regenerating for the body.
Equally effective is the herbal tea. It is necessary to boil 5 grams of turmeric root in a cup of water for 3-4 minutes. Leave to rest for 10 minutes, strain, sweeten with honey and drink a few times a day. Turmeric herbal tea is a remedy that seems to help in the case of joint pain. In combination with dandelion, it has a purifying effect that seems to stimulate the activity of the kidneys.
Turmeric tea is added to the range of solutions to treat colds. Mix two teaspoons of turmeric powder with a teaspoon of honey, a pinch of black pepper and a teaspoon of lemon juice, add everything to a liter of boiling water and sip the tea throughout the day.
Turmeric tea is also useful for those who play sports, to replenish the minerals lost with sweat during sports.