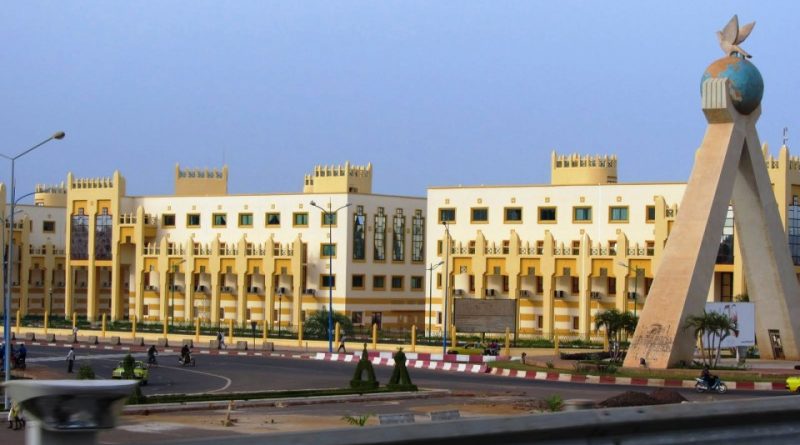 Mali is a West African state located inland and with no landlocked sea. In fact, it borders Algeria to the north, Niger to the east, Burkina Faso and Ivory Coast to the south, Guinea to the south-west and Senegal and Mauritania to the west.
The capital of Mali is Bamako which is also the most populous city in Mali.
This city stands on Niger, near the rapids that separate the Upper Niger valley and the Middle Niger valley, in the south-western part of the country, and has a population of just over 3,000,000 inhabitants.
Mali is located in the interior area of ​​north-western Africa, between the Tropic of Cancer and the equatorial belt and, includes, in the northern part a large portion of the Sahara and, in the central-southern part, a long section of Niger with the its tributaries.
The territory of Mali, for the most part flat, consists of the desert in the north, and the savannah in the south.
It is a country made up of low altitude plateaus, formed by recent sedimentary rocks, superimposed on the ancient crystalline base. In the northern region there are vast planks that rise a few hundred meters to culminate in the mountain range of the Adrar des Iforas; in the center, towards the west, the massif is limited by the deep furrow of the Tilemsi valley, beyond which the crystalline massif of the Timetrine slopes towards the extensive depression of the Niger basin. In the south-western region, the northern edges of the Guinean massif with Mount Mina (820 m), from whose eastern side the Volta Nero, the Kenieba mountains and the Bambouck plateau emerge, which do not exceed 600 meters in height.
From a hydrographic point of view Mali is affected in its southern part, for 1800 km, by the course of the Niger river and by the upper one of the Senegal river.
Niger, coming like Senegal from the Fouta Djalon massif in Guinea, enters Malian territory with a route oriented from south-west to north-east, forming a wide swampy loop before changing direction towards south-east. Three sections characterized by a different flood regime can be distinguished: one upstream to Ségou, the large inland delta in the Macina and Mopti regions and the downstream section of the delta.
The vast area, irrigated by the internal delta, represents a happy exception in the arid Sahelian reality and allows a significant agricultural and pastoral exploitation. The Senegal River flows into Mali for only 450 km: its main tributary is the Falémé on the border with the State of Senegal.
As regards the climate, this country is characterized by three distinct situations: in the northern area, beyond the Sahelian margin, desert climate conditions prevail with very high temperatures in summer and during the day (from 25 to 52 ° C), relatively low in winter and during the night (from 0 to 5 ° C), characterized by the lack of rainfall. The central Sahelian region receives more than 250-700 mm of annual rainfall, while in the southern Sudanese region, the average annual rainfall exceeds 700-1.000 mm and the rainy season begins in late April, extending until October. Temperatures are generally high across the country. The temperature ranges intensify proceeding towards the more continental areas: the average values ​​of the minimum temperatures in January are 17 ° C in Bamako and 14 ° C in Gao, the maximum ones in May are respectively 39 and 43 ° C. Throughout the year, the north-east trade wind dominates the northern region, Harmattan blows everywhere from November to April (dry season).
From an ecological point of view, Mali is home to five different habitats. The north is occupied by the Sahara, while the south is made up of relatively flat cultivated land and well irrigated by moderate rainfall. The west is a hilly offshoot covered by the forests of the highlands of Fouta Djalon, Guinea, the central belt of the country is a semi-arid savannah (the Sahel) and the inner delta of Niger is a labyrinth of canals, swamps and lakes. Niger, a river of vital importance for the country, is the most important geographical element of Mali. It flows for 1626 km through the country coming from Guinea, in the south-west, to Timbuktu and the edge of the Sahara, before bending south-east through Niger and Nigeria and then throwing itself into the Atlantic.
For the conservation of the huge environmental and ecological heritage in this country, four national parks and several protected areas have been established, but wildlife has been annihilated by centuries of human intervention, and the parks are not easily accessible. It seems that the vast Parc National de la Boucle de Baoulé, north-west of Bamako, offers good opportunities for birdwatching, while the Parc National du Bafing, which stretches along the lake formed by the Manantali dam, west of Kita, protects numerous primate species, including chimpanzees. The Ansongo-Ménaka Reserve is located south-east of Gao, next to the Niger River, and is very isolated. The animals have largely disappeared, but Niger still hosts hippos. The area of ​​greatest interest to visitors, although difficult to reach, is the Réserve de Douentza, a vast semi-deserted expanse north of the main road between Mopti and Gao, populated by robust desert elephants.
Currently the most pressing environmental issues for Mali are deforestation, over-exploitation of the land for grazing and desertification. The three problems are closely related and together pose a threat to much of the country. In the Sahel, trees are cut down to make wood for cooking and building. In other areas, grazing is stripping the plant carpet and the network of roots, so there is not much left to hold the soil, which is eroding, together. Furthermore, the increase in population only makes this situation worse. 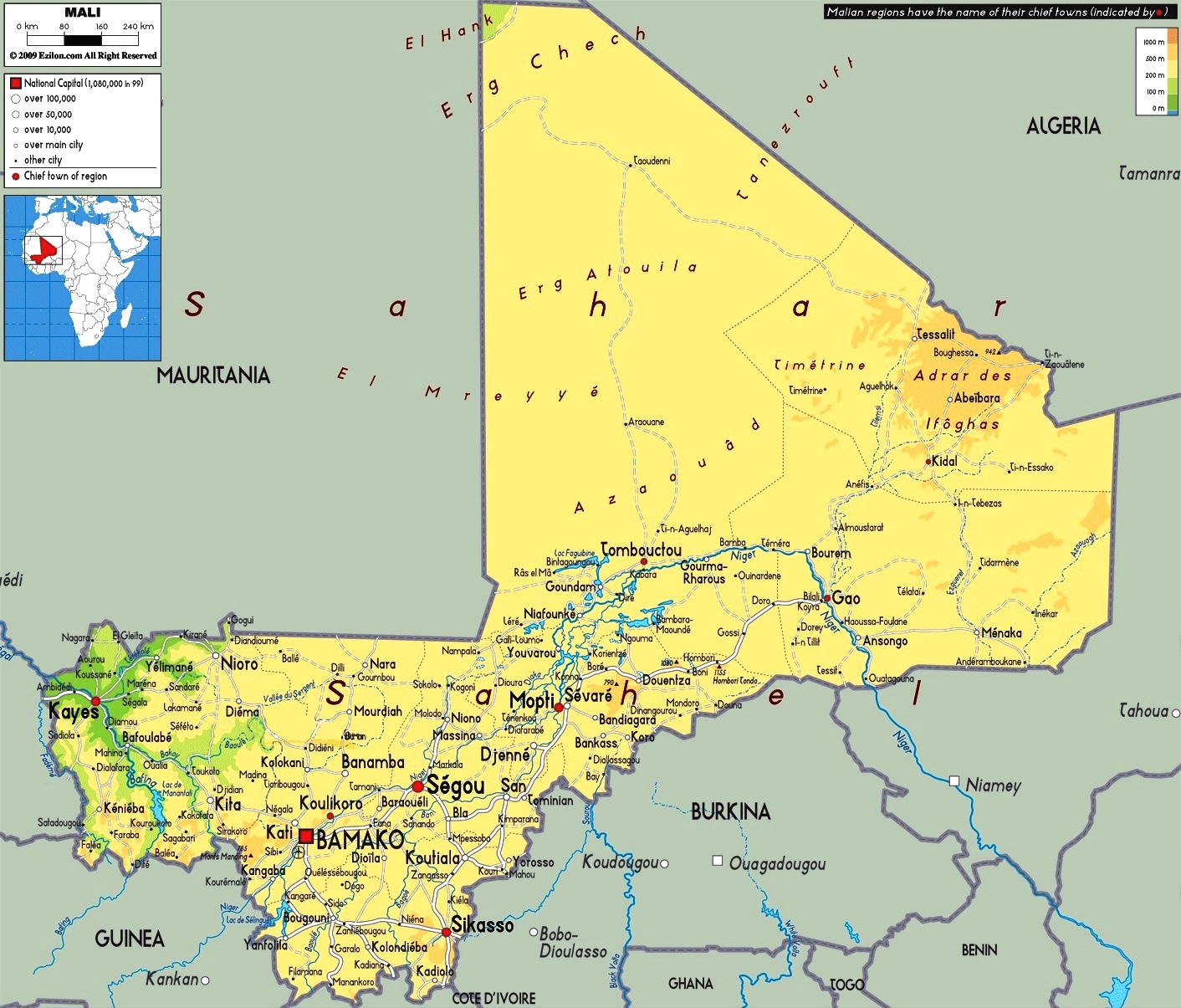 Flora –
In the plant landscape (Sudanese area), the tree-lined savannah rich in tall grasses, majestic baobabs and fruit trees predominates, alternating with residual areas of tropical forest and gallery forest along the course of the rivers. In the Sahelian area the steppe is very widespread: the tall grasses are replaced by grasses with thorns, with gigantic euphorbias and acacias.
In addition, the forests, covering 12.4 million hectares, developing in the Sudanese-Guinean belt with rainfall up to 1,400 mm, supply firewood (the main source of energy available) and valuable timber, gum arabic and pasture for livestock. According to the United Nations Program, in the period 1990-2010, they suffered a decrease of 11.2 percent [24]. Between 1997 and 2012, 5-6 million cubic meters of timber were exported annually [25]. Timber is also imported from Burkina Faso, Ghana and Ivory Coast. The development of Jatropha cultivation could help slow down desertification.

Fauna –
The fauna, although it has been put to the test in recent decades, is still abundant and well represented: monkeys, ruminants, felines and large reptiles live in the savannah and on the edge of the equatorial forest. Even in the Sahelian region we find animals like those found in the bush. Crocodiles, hippos and many species of fish live in the waterways. The Baoulé national park, in the south-eastern part of Bamako, houses a large wildlife reserve.
With regard to the fish fauna this is affected by a peach, always artisan type, which is practiced in rivers, natural and artificial lakes, swamps and flooded areas, on a total area of ​​4,500 square kilometers. The main rivers, shared with neighboring countries, are Senegal with its main tributaries Bafing, Bakoye and Falémé and Niger which crosses the country for 1,750 kilometers and supplies over 80 percent of fish production. There are also a hundred lakes, including Faguibine, Sélingué and Manantali.