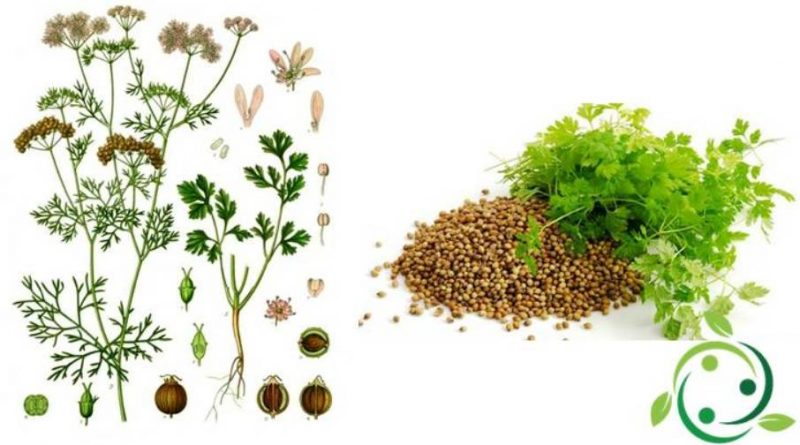 Coriander, also known as Chinese parsley or with the Spanish name of cilantro (Coriandrum sativum, L. 1753), is a spice obtained from the fruits of the homonymous plant.

Origins and History –
Coriander is a plant native to southern Europe and the Middle East and is one of the oldest spices known in the world. Its use as an aromatic and medicinal plant was so appreciated as to represent a votive offering also depicted in Egyptian tombs.
The use of this plant, both as a medicinal and aromatic essence, was already widespread in Mediterranean civilizations since ancient times. Its use by the Mycenaeans is attested in the linear B tablets, where it already appears defined as “ko-ri-a-ndo-no”.
The Romans used this spice pounded and mixed with salt and vinegar a lot to preserve food. Apicius makes it the basis of a condiment called “Coriandratum”. According to Pliny the Elder (Naturalis Historia, XX, 82), putting some coriander seeds under the pillow at sunrise could make the headache disappear and prevent fever.
Carnival confetti takes its name from the sugar-coated seeds, later on plaster balls, now multicolored paper discs.
Coriander fruits, which are similar to peppercorns but yellow in color, have been widespread for centuries in the Mediterranean basin.
Today coriander fruits and leaves are highly valued. In Morocco for marinades, soups and meat fillings; in Egypt for bean patties.
In the East, the leaves, whose smell reminds of bedbug, are used instead of parsley, while the fruits with a vague hint of orange peel, enter the composition of the curry. If fruits and leaves are used in Mexico to flavor dishes, bread is enriched in the Balkan basin and desserts are enriched in the Anglo-Saxon area.
In Italy coriander is the flavoring of some digestive liqueurs, pickles, and salami where it is contained whole (often mistaken for peppercorns). The small fruits of this spice, improperly called seeds, give the best of them if ground on cooked meats.
Today herbal medicine recognizes coriander, a plant with leaves similar to parsley, with antiseptic, aperitif and digestive therapeutic properties, effective for combating loss of appetite and intestinal swelling. The ideal dose at least two teaspoons a day.

Description –
Coriander is an annual herbaceous plant of the Apiaceae family, that is, of the same family of cumin, dill, fennel and parsley.
The flowers are white and are gathered in umbrella inflorescences, while the fruits are aromatic diakenes.
The fruits that ripen in June-July are used for this plant.

Properties and Uses –
Coriander is a plant whose fruits, similarly to those of fennel and caraway, contain alcohols and terpenes with antispasmodic activity on the smooth muscles of the digestive tract; for this reason, coriander seeds are used in herbal teas as flavoring and digestive.
In folk medicine, coriander essential oil is considered useful as a deworming and as a component of soothing against rheumatism and joint pain. In perfumery, it is used as a flavoring, while in the gastronomic field, coriander is used as a spice and in a liqueur.
Coriander is attributed to carminative, digestive and antispasmodic properties of the digestive tract. To be more precise, the aforementioned activities are attributable to the essential oil extracted from the plant, rich in terpenes and alcohols.
For this reason, the use of coriander has been officially approved for the treatment of dyspeptic disorders. The substances contained in it, in fact, are able to stimulate the production of gastric juices and therefore promote the digestive process.
Coriander is also attributed with stimulating, exciting and vulnerable properties, although there is insufficient clinical data to support this.
Some studies have also been conducted on the potential antifungal and antibacterial properties of coriander. From these researches positive results emerged; in fact, coriander has been shown to possess bactericidal and fungicidal activity in vitro.
Another study, however, has highlighted how coriander fruits can be a valuable aid in the treatment of migraine, as they have proven to be able to reduce both pain, duration and frequency of migraine attacks .
However, before obtaining official approval for this type of medical applications of coriander, further and more detailed clinical studies are needed.
As stated above, thanks to the stomachic, carminative and antispasmodic properties ascribed to coriander essential oil, this plant can be used successfully against dyspeptic disorders and to counteract the loss of appetite.
In any case, before taking any type of preparation containing coriander for therapeutic purposes, it is best to contact your doctor in advance.
Coriander is also used in Chinese medicine, where it is used as a remedy for loss of appetite, hemorrhoids and rectal prolapse, but not only. In fact, this plant is used by traditional medicine in China even as a remedy for chickenpox and measles.
Numerous and varied, then, are the uses of coriander in traditional Indian medicine, which involves the use of this plant for the treatment of coughs, hemorrhoids, bladder disorders, vomiting and amoebic dysentery, as well as as a remedy to be used against urination painful, nosebleeds and dizziness.
Coriander is also used in the homeopathic field, both alone and in association with other homeopathic remedies, with indications for the treatment of diseases such as inflammations of the gastro-esophageal mucosa, dysphagia, dyspepsia, flatulence and pain of the hollow organs.
Obviously the use of coriander extracts or parts of plants for therapeutic use must be carried out under direct medical consultation.
In addition, great attention must be paid to the use of extracts / essential oils by mouth.
Among the contraindications, please remember to avoid taking coriander in case of ascertained hypersensitivity to one or more components.
In addition, drug interactions with neurostimulant drugs can occur (possible interactions for sum of effects).
At a gastronomic and food level, dried coriander seeds and fresh leaves are mainly used in Indian and Latin American cuisine. In Europe it is now back in vogue following those culinary cultures.
In addition, coriander is one of the few mercury chelators, both in the cell nucleus (avoiding DNA damage) and in the spaces between cells, and causes the gallbladder to pour into the small intestine much more bile, containing toxins.

Preparations –
Coriander is a spice that, according to some recent studies in humans, can be appreciated or completely unpleasant according to genetic components.
Coriander enters the preparation of some cured meats, flavor meat, fish and vegetables, but also perfumes beers, biscuits, sugared almonds and pampepato; the seeds are used as a spice and are less spicy than the leaves, they are sweet with a slight lemon flavor.
Ground coriander seeds are one of the ingredients of the curry and garam masala. In the East, the leaves are used in place of parsley. In Tenerife it is used in green Mojo (salsa). In Southern Africa, abundantly spiced spiral-shaped sausages are placed in the boerewors. In the past, in Italy, it was found in mortadella. In the city of Monte San Biagio and in some countries on the Ionian coast of Basilicata, coriander seed is used to season the sausage mixture.
The roots are used in particular in Thai cuisine to prepare a basic dressing together with garlic and pepper.
In herbal medicine, coriander can be used as an infusion against stomach pain, it is also recommended for problems of aerophagia and migraines, helps digestion and has an anti-diarrheal function.
In Sri Lanka, Tamil populations use the fruit for the preparation of a decoction which, sweetened with honey, is used to relieve cough.