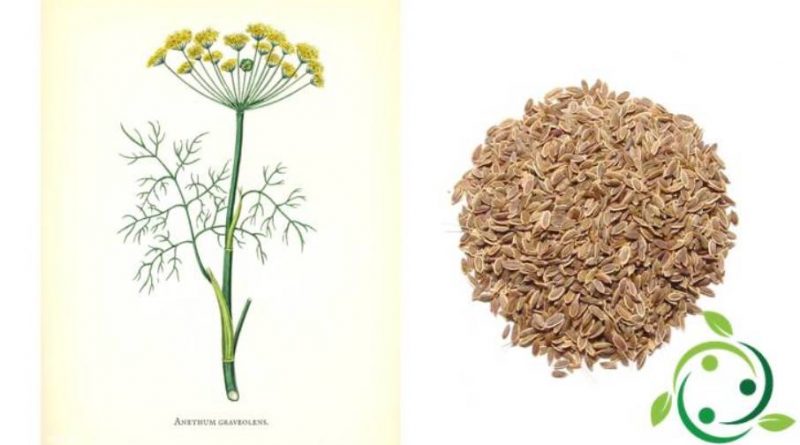 Dill is a plant (Anethum graveolens L.) whose seeds are used as a special use.

Origins and History –
Dill, a plant native to Asia, has been used for culinary and medicinal purposes since ancient times.
This plant, since ancient times, has been used by the Jewish people as a vegetable, by the Egyptians for more than 5,000 years, as a medicinal plant, by the Greeks and Romans for its perfume and its medicinal virtues and is mentioned in the Gospel according to Matthew: “Woe to you, hypocritical scribes and Pharisees, who pay the tithe of mint, dill and cumin and transgress the most serious prescriptions of the law: justice, mercy and faithfulness.”
The historical sources on its use are also manifold. The Talmud, one of the sacred texts of Judaism, mentions it for its diffusion and importance.
It is mentioned in the Ebers papyrus, which underlined its therapeutic use among the Greeks, according to whose medical school epilepsy attacks could be avoided and the harmful spells could be nullified by holding a sprig in the left hand.
The dill was also widely used by Romans who believed it had the property of increasing physical strength. It is therefore not surprising that gladiators were one of the main condiments to be added to any dish without sparing. Legionnaires sprinkled their wounds with burnt seeds in order to facilitate healing. Apicius placed this herb in many recipes, including dill chicken.
Even in the Middle Ages it was of considerable importance; the book of “Casa Cerruti” speaks of it: “It is customary to sow dill in vegetable gardens, to mix it with other herbs, which makes it tastier and more pleasing to the taste. The best is the green one, tender and fresh. Easy to windy stomach does very well. It also facilitates sleep, and it is said that for this the ancients placed it in the garlands … “.

Description –
Dill is a herbaceous plant, of the Apiaceae family, characterized by small flowers. From these seeds are formed which are very small, beige in color and ovoid in shape.
Fresh dill seeds do not smell good (graveolens means “heavy smell”) but become very aromatic once dried, with a slight aroma of anise and fennel.
Fresh leaves are also used in pharmaceutical culinary uses.

Properties and Uses –
The use of dill in the kitchen in Italy is not widespread while it is more widespread in other European countries and in the Middle East.
In Germany and Hungary it is used to prepare sweet and sour pickles; in Scandinavia it is used to flavor salmon, eggs, molluscs, potatoes and soups; in Greece dill leaves accompany feta and legumes and it is not uncommon to find bread enriched with the seeds of this spice.
In addition, dill could be considered an ancestor of chewing gum: in the United States, in the past, dill and fennel seeds were called meeting seeds, since in church they were given to chew the children to keep them good during the long and boring sermons.
Contemporary phytotherapy uses dill seeds, and to a lesser extent leaves, to relieve digestive difficulties, colic, irritation of the oral mucous membranes, and to increase milky secretion.
The properties of the dill, however, are many, so much so that this spice has been used since ancient times as a natural remedy for many ailments.
The dill is carminative (promotes the expulsion of gas from the stomach and intestines) and antispasmodic, so it is perfect in case of colic, stomach cramps and hiccups. It is also an excellent natural remedy for halitosis. Its diuretic and purifying properties make it a great ally against cellulite since it helps eliminate waste, the cause of the accumulation of excess fluids.
Drinking an infusion of dill seeds before bedtime is an excellent habit since this plant promotes digestion and fights insomnia.
Another property of dill is to treat and regenerate the nails: crushed seeds or leaves are excellent for preparing strengthening packs.

Preparations –
Dill has various uses both in the kitchen and for healing purposes.
In the kitchen, dill is used as an aroma; fresh leaves or dried seeds can be used. Analogous to fennel in aroma and properties, it is also known by the names of: bastard fennel, fetid fennel and rizu fennel.
It is a spice widely used in Germany, the British Isles, Eastern Europe, Scandinavia, Greece (where it enters the composition of the well-known Tzatziki) and also in India and in many other countries in the world, mainly in fish dishes .
In general, Dill seeds are used throughout the southern Mediterranean area for vegetable preserves, jams, liqueurs and pastries in general. In northern Europe they are often used for breads and pretzels or are added to marinades. German cuisine makes extensive use of it, especially for flavoring pickled gherkins.
The leaves, fresh or dried, are used to flavor different culinary preparations, generally salads, fish, meats and sauces; while the seeds are used to perfume liqueurs and jams. Excellent to sprinkle on hard-boiled eggs or in potato or tomato salads, in cheese-coated sandwiches.
The seeds also produce an oil (dill oil).
This spice also prepares a delicious digestive liqueur and you can flavor olive oil and vinegar.
For therapeutic or curative purposes it can be used in various ways:
– used in infusion, dill promotes digestion and soothes colitic pain;
– the seeds, infused, allow to stop hiccups, headaches and childhood coughs;
– other uses are those for indigestion, nervous vomiting, flatulence, breastfeeding, intestinal gas, spasms, cramps and also as an intestinal antiseptic.