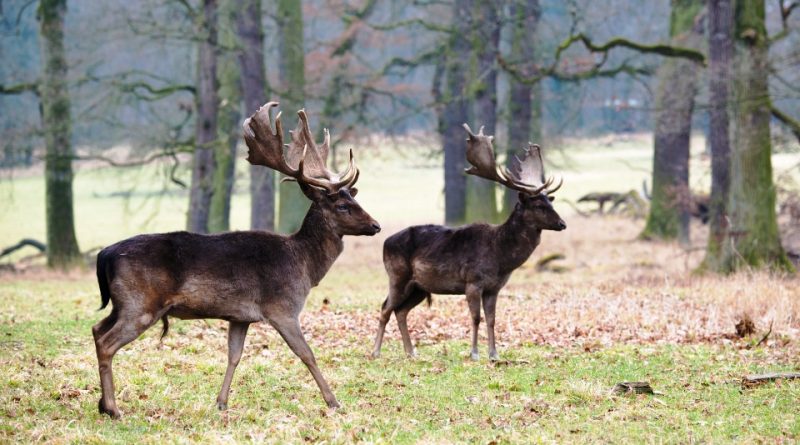 The Fallow Deer (Dama dama Linnaeus, 1758) is an artiodactyl mammal belonging to the Cervidae family.

Systematic –
From a systematic point of view it belongs to the Eukaryota Domain, Animalia Kingdom, Phylum Chordata, Mammalia Class, Artiodactyla Order, Cervidae Family and therefore to the Genus Dama and the Species D. dama.

Geographical Distribution and Habitat –
The Fallow deer is a species that after the last ice age had become extinct in Europe while remaining present in an area between Asia Minor, Persia, Mesopotamia and North Africa.
Subsequently over the past centuries, the species has been repeatedly introduced throughout Europe, giving rise to reproductive populations throughout the continent.
Subsequently this species with the European expansion in the other continents, the fallow deer has spread a bit all over the world so that today numerous perfectly naturalized allochthonous populations are found in Siberia, United States, Argentina, Australia, New Zealand, Fiji, Hawaii. , South Africa and Canada.
As in all Europe, also in Italy the fallow deer had become extinct during the last glaciation, all evidenced by Neolithic cave paintings present throughout the Peninsula and its presence is not yet documented during the Roman period, while the fallow deer certainly lived in Italy during the medieval hot period.
Today semi-wild populations of fallow deer are present in most of the large Italian parks and reserves, with the exception of the regions of Abruzzo and Molise. However in Italy the Fallow Deer is widespread throughout the territory from the Alpine chain to the Apennines.
As regards the habitat, the Daino is a typical ungulate of Mediterranean environment, present at maximum altitudes of 800-1000 m. s.l.m ..
However, as is shown by his ubiquity, his remarkable trophic plasticity (he can behave both as a pasture and as a burner) and the highly variable behavior, marked by a high level of sociability, make him suitable for a large number of environments, especially if characterized from the presence of grasslands and clearings. However it is not at ease in the mountains, especially as long as the snow is prolonged, and in extremely arid areas. The species often shows significant ecological segregation between the sexes, related to differences in diet. 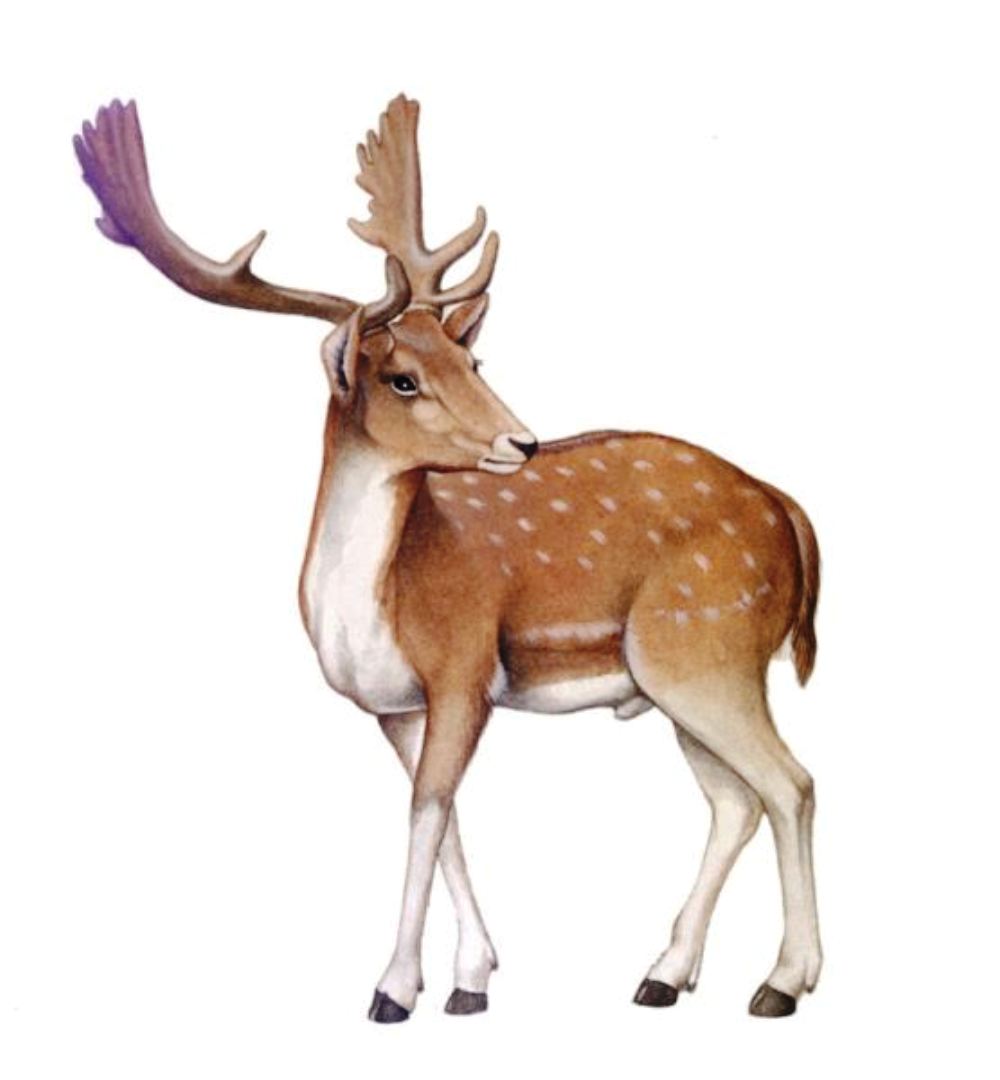 Description –
Dama dama is a medium-sized mammal between deer and deer, with a weight ranging from 50 to 90 kg, with manifest sexual dimorphism.
The height at the withers varies from 80 to 110 cm, with a length from 135 to over 160 cm and with the female having a smaller size and a weight ranging from 30 to 50 kg. The tail measures approximately 20 cm.
During the year, this animal takes on two different molts; an autumn-winter one, with a typically gray-brownish coat, which makes the white pomellation much less visible; a spring, starting from the month of April, with the replacement of the winter coat with a reddish-brown coat with a black dorsal median strip from the neck to the tail (more marked black surrounded by iridescent white) and white spots on the back and sides (pomellato).
The young individuals are recognized for the characteristic dark brown coat pomellato along the sides that is maintained even in adults.
In addition, there is also a so-called “melanic variety” coat due to a genetic factor for which some animals at birth have a much darker, almost brownish-black coat, always however pomellato, so as to be called “black”.
In some cases individuals with isabelline variants appear, that is, with more evident pomellation on a lighter background, up to white with pigmented iris, therefore not albino.
The male is distinguished from the female, as well as by the proportions and by a well-developed Adam’s apple, by the presence of the stage consisting of two poles, from which two, three or more tips branch out and which have the characteristic of having their palmate terminal part, in relation to the development and age of the animal. The trophy falls and grows annually.

Biology –
The Fallow deer has a breeding period from October to November, with the female having a gestation of 230-240 days, giving birth to a puppy (sometimes even two) at a time that takes its first steps within an hour.
Weaning lasts on average 3 to 5 months and sexual maturity is reached around 12-14 months, while social maturity towards 3-4 years.
These animals also have a longevity that can go beyond 20 years, although on average it ranges from 9 to 10 years.
The reproduction phase begins with the mating period from mid-October to early November: in this period, the males, usually solitary, join the groups of females and puppies, chasing the young males (which form mono-sexual groups of 5-6 individuals and remain on the margins of the male territories, in the hope of mating with some female without the knowledge of the dominant male) and defining their own territory. Males defend their right to mate with females from other suitors, often even stop feeding to better control their harem, to claim possession of which they frequently ring out their bellow. The fighting takes place basically crossing the stages until one of the contenders fails and follows a precise ritual. This, in addition to the flattened shape of the adult stages, causes the animals to rarely suffer serious injuries at the end of the battle.
The female, on the other hand, near the birth, isolates herself from the herd and gives birth to a single cub, as mentioned, (but the twin parts are not rare).
The female brings the puppy to the herd when it is about 10 days old: up to that moment, the puppy is left alone and nursed every 4 hours, while to avoid being detected by any predators it remains perfectly still and trusts in the coat mimetic and with the characteristic of not giving off odor. The baby begins to ingest solid foods around the month of life, although he cannot be said to be completely weaned before the age of seven months.
During the night and while the mating season takes place, the fallow deer emits a particular call: it is perhaps best described as a cross between a loud burp, a moan, a snore, a snort and a snarl.

Ecological role –
The fallow deer is an easily adaptable animal that can survive well in many environments even if its favorites are the wooded areas with a prevalence of broad-leaved trees near clearings or open spaces while avoiding mountain areas with persistent and abundant snow cover.
It is an animal less fearful of men for example than the red deer, with the exception of the old males, who lead mostly solitary lives and inhabit more inaccessible areas, they are instead very prudent and difficult to approach by humans and other animals.
As far as feeding is concerned, the fallow deer is very versatile, in that it behaves indifferently as a burner or a pastor.
This species generally has no preference regarding the place to live and graze; in fact, it is satisfied with the food that finds and does little damage to the soil and vegetation. Its nourishment consists of grass, leaves, buds and fruit and certain types of mushrooms. The fallow deer is a ruminant, that is, an animal that after swallowing food regurgitates it and then chews it more carefully in sheltered and peaceful places. Feeding takes place throughout the day, even if food peaks occur during the early hours of the morning and at sunset.
The fallow deer is a food competitor of the deer: for this reason, in the areas populated by the deer, the deer is confined in animal enclosures.
The Fallow Deer is also kept at bay by some predators. In Europe, adult fallow deer are hunted by wolves and, sometimes, by lynx, while cubs are victims of golden eagles and eagle owls. In Asia, however, the main predators are the leopard, the cuon and the wolf. Where they were introduced, the deer fall victim to coyotes, wolves, crocodiles and pythons.
According to the IUCN, in Italy, the Daino presents management problems but not conservation problems; therefore the generalized reintroduction policy of this species, as it was conducted after the Second World War, should cease and such operations should be limited to particular cases using modern evaluation procedures (S. Focardi in Spagnesi & Toso 1999).
Furthermore, also in Italy, Law 157 of 11 February 1992 allows hunting only through the method of selection hunting, on the basis of withdrawal plans, drawn up by the provincial and regional bodies on the basis of the censuses.
In 2010 the fallow deer population in Italy was estimated to be at least 17,600 head, decreasing due to controlled culls.