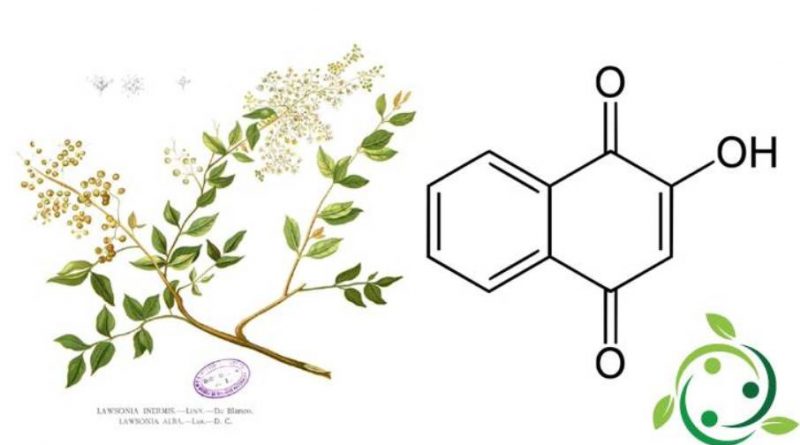 Lawsone, whose term in the official IUPAC nomenclature is: 2-hydroxy-1,4-naphthoquinone, also known as hennotannic acid and whose brute or molecular chemical formula is: C10H6O3 is a red-orange dye present in the leaves of the plant of henna (Lawsonia inermis L.) and in the flower of the water hyacinth (Eichhornia crassipes (Mart.) Solms).
The procedure for extracting Lawsone from Lawsonia Inermis is complex due to its easily biodegradable nature.
The isolation of this organic molecule proceeds according to four steps:
– extraction with a solvent which is generally sodium hydroxide (NaOH);
– column filtration by means of a macroporous absorption resin;
– treatment with ethanol to remove impurities;
– final freezing phase of the substance to obtain a yellow powder.
Lawsone is a molecule that has been used by humans for at least 5000 years as a hair dye.
Lawsone chemically reacts with the keratin present in the skin and hair producing a permanent coloring that lasts until the skin or hair grows back.
Moreover, Lawsone strongly absorbs UV light and the aqueous extracts that contain this molecule can have a tanning effect and are used in very effective sun creams.

Chemically, lawsone is similar to juglone, which is found in nuts.
Among other possible applications, Lawsone is hypothesized to be subject to a reaction similar to Strecker’s synthesis of amino acids.
Research has recently been conducted into the potential applications of lawsone in the field of forensic science.
Since lawsone shows many similarities to the behavior of Ninhydrin, which is a highly selective indicator for the detection of amino acids, and which is currently used as a reagent for detecting latent fingerprints, research has been conducted to find out if the lawsone can be used in this field.
In this field, although research is ongoing, Lawsone shows promising results as a fingerprint detection reagent due to its maximized photoluminescence at 640 nm, which is high enough to avoid background interference common to ninhydrin which instead reacts with amino acids giving a blue-violet color (absorption at 570 nm), except with proline (it is a cyclic amino acid and therefore has a secondary amine) with which it forms a yellow complex (absorption at 517 nm).