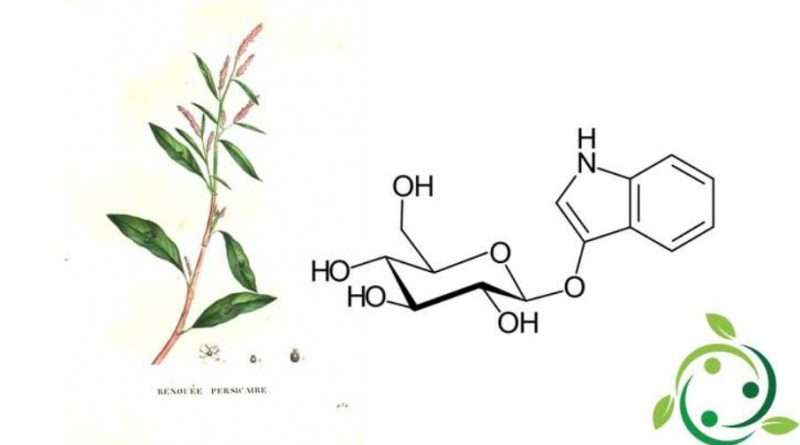 Indican, the term of which in the official IUPAC nomenclature is: (2R, 3S, 4S, 5R, 6S) -2- (hydroxymethyl) -6- (1H-indol-3-iloxy) tetrahydropyran-3,4, 5-triol and whose molecular chemical formula is: C14H17NO6, is a glycoside present in the leaves of various species of the indigofera genus and other plants (Isatis tinctoria, Persicaria tinctoria).
Indigo is a colorless, water-soluble organic compound and is a precursor to indigo dye. This dye, especially once, before the advent of synthetic chemistry gave precisely the indigo color which is an intense and saturated color, traditionally considered a color in the visible spectrum, as well as one of the seven colors of the rainbow: the color between violet and blue.

Indican passes into the maceration water of the leaves themselves, and by hydrolysis (caused by enzymes also present) it splits into β-D-glucose and is worn.
Indican, on a human level, is present in the blood in small quantities (indacanemia) and is eliminated by the urinary route (indacanuria).
In some morbid states, indacanemia and consequently indacanuria increase considerably.
This is due to a defect in tryptophan metabolism. Tryptophan is first converted into indole, then into indano by bacteria in the intestine. The Indican is then excreted in the urine and from there after exposure to the air, it is converted into an indigo blue dye due to the oxidation of atmospheric oxygen.