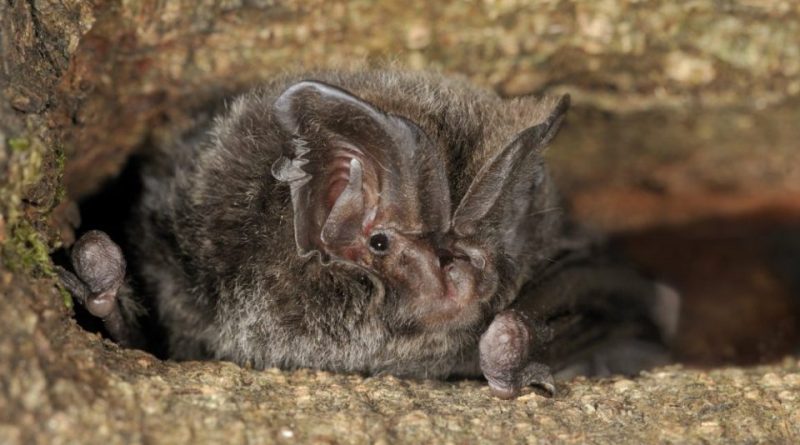 The western barbastelle (Barbastella barbastellus Schreber, 1774) is a bat belonging to the Vespertilionidae family.

Geographical Distribution and Habitat –
The western barbastelle is therefore widespread in the Palearctic Ecozone.
In Italy it is found throughout the Alpine area and probably in all regions.
Its habitat is those of the hilly and mountainous wooded areas and also in urban areas up to 2,260 meters above sea level.

Description –
The Barbastella barbastellus is a bat of the length between head and body of 48-58 mm, with a tail of the length of 38-52 mm, ears of the length of 12-18 mm and a wingspan of 24.5-29.5 cm, for a weight ranging between 6 and 14 grams, which does not present sexual dimorphism.
This bat has a long and mordibo hair, of black-brownish color in the upper part, with whitish apices (white-yellowish in the young) and of dark gray or gray-brown color in the lower part.
The muzzle, ears and patagus are brownish-black in color. The muzzle is however short, flattened and wide with nostrils facing upwards and a very narrow mouth.
The eyes are small and the ears wide and facing forward.
The wings are wide and ending in a point, the spurs of the legs are of medium length with a narrow epiblema and the tail just protruding from the Europatage.
The nipples are two.
The karyotype is 2n = 32 FNa = 50.
This bat emits low duty cycle ultrasound with short duration pulses at an almost constant frequency between 32.6 and 34.8 kHz, with high-pitched screeching and buzzing sounds.

Biology –
The female Barbastella barbastellus reaches sexual maturity in the year of birth.
The mating period occurs in the period between late summer and winter; childbirth occurs in June-July, after a 6-month gestation, giving birth to 1-2 small injects, in cracks in buildings or hollows of trees. The unborn children reach adult size after 8-9 weeks of life. Life expectancy is 21 years and 9 months.

Ecological role –
The western barbastelle is a mammal with twilight-nocturnal activity, even with a cold-humid climate.
These are mostly sedentary bats that winter in the period of October-November / March-April, solitary or in small groups, hanging freely or half-hidden in cavities, cellars, mines and small caves, with temperatures of 0-8 ° C, but very often even well below the freezing point at around -6 ° C. Being able to resist briefly even at temperatures down to -16.5 ° C. Here they hibernate alone or in large groups of up to 7,800 individuals, sometimes together with dwarf bats.
In the summer they take refuge in the buildings, sometimes hollows of trees and in the southernmost part of the area also in the caves where they form nurseries formed by about 5-30 females.
Their habitat is mainly that of the wooded areas of hills and mountains, where it feeds on small insects caught in flight or on tree branches or on foliage above ponds, in the woods or along their margins, in gardens and in the streets illuminated.
The predatory activity of these bats usually starts very early, even in daylight and in bad weather.
During this activity they establish regular circular routes of about 50-100 meters in diameter at about 4-5 meters above the ground.
The flight of the Barbastella barbastellus is agile and maneuvered, slow and floating. It can travel up to 290 km, but mainly tends to be sedentary.
According to the IUCN Red List, although it has a wide range it is generally rare, the population is fragmented and a decline is reported due to the loss of its habitat, consisting of mature trees, this species is classified as close to threat (NT ).