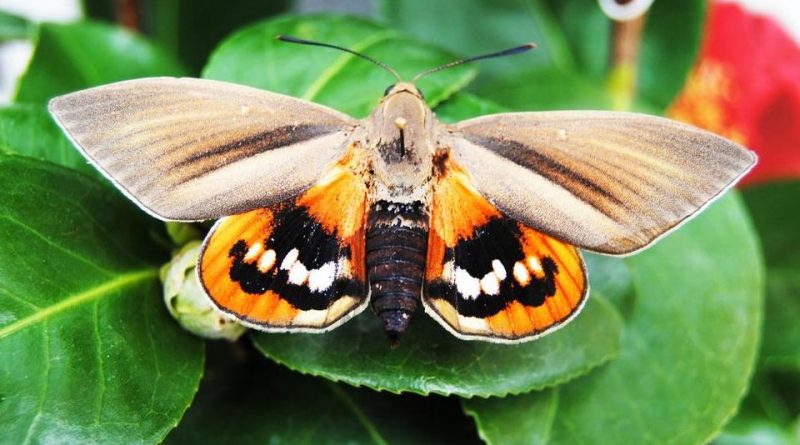 The palm tree castnide (Paysandisia archon (Burmeister, 1880)) is a moth that belongs to the Castniidae family.

Geographical Distribution and Habitat –
The palm tree castnide is a butterfly of South American origin, with an area located in Argentina, western Uruguay, Paraguay and south-eastern Brazil, and which was recently introduced on the European continent.
Its introduction in Europe took place through commercial transport; the larvae were present inside leafy jambs of palm trees that arrived in the old continent.
The first reports were made in Spain (Catalonia) and southern France (Provence-Alps-French Riviera, Languedoc-Roussillon, Midi-Pyrenees) in 2001; subsequently they arrived in the United Kingdom (West Sussex) in 2002 and in the Balearic Islands in 2003.
In Italy the first specimens arrived in Salerno in 2002, from which it probably spread to other areas.
This insect is considered by the Italian health authorities as a probable threat to the palms of the Adriatic coast.
In Italy the habitat of this insect sees it host above all of the Chamaerops humilis (dwarf palm) and Trachycarpus fortunei (palm of japan), specimens of Phoenix canariensis are secondarily infested; less frequent on other palm species.

Morphology –
The Paysandisia archon is a large butterfly that reaches on average 9-11 cm of wingspan (greater in the female) and with evident dimorphism.
The characteristic of this moth is that of having the front wing of a color between gray and olive green on the upper page, fairly uniform, although it tends to be darker in the apex region, in the coast and in the termen. A darker longitudinal median band can be seen.
The lower part of the wing is grayish in the distal part and tends to be brownish in the proximal area.
The rear wing is instead characterized by a red base color, on the upper page, on which two wide transversal black bands stand out, which go from the inner edge almost to the outer one, and are crossed by six white cells; in the lower part, the upper page motif is repeated but with a base color that is dull gray, lighter towards the external margin and the anal angle, and the white cells have less clear contours and tend to merge with each other.
This butterfly has clavate and hooked antennae at the ends.
The head and thorax are characterized by a grayish-brown color, with the presence of hairiness.
The abdomen is chest colored, but with slightly darker tones, especially in the male.
The female is much larger than the male, and shows a pointed ovipositor, 4–5 mm long.
The eggs are fusiform, about 1.5 by 5 mm, whitish in color when deposited, which then turns to a gray-pink color before hatching; there are 6-8 longitudinal ribs.
The mature caterpillar measures 80–90 mm in length and 15 mm in diameter, cream-white in color, squat and with short legs and pseudo-legs; it has a light brown head that partly falls into the first thoracic segment, and with the second wider thoracic segment.
The pupa measures approximately 50 mm in length, has a squat and fusiform shape, a yellowish-brown color, and reveals short brown spines arranged in a comb on each abdominal segment.

Aptitude and biological cycle –
The biological cycle of this butterfly begins with the female laying up to 6 eggs at a time in a period from May until October.
The deposition is carried out between the fibers of the leaf crown of the host plant, in a position sheltered from the direct rays of the sun, or near the meristems, or still at the base of the leaf rachis.
The development cycle of eggs is influenced by temperature and can fluctuate between 12 and 21 days.
The newly born caterpillar measures approximately 7 mm, light orange-pink in color, and covered with long bristles. The development takes place in a period ranging from 10 to 18 months, depending on the spawning season; this digs long parallel and somewhat rectilinear tunnels within the tissues of the host plant, which increase in diameter with its growth to frequently cause the death of the plants.
Some caterpillars never abandon the host plant for the entire period of development and in this stage they overcome winter.
Obviously this depends on the hatching period of the eggs.
If the eggs hatch in spring, the larva grows throughout the year, overwinters only once, and pupates at the beginning of the following spring, after about 10-11 months; if the eggs hatch instead in late summer or even in autumn, then the insect overwinters for the first time as an immature larva, grows throughout the following calendar year, then winters a second time as a mature larva, and reaches pupation in the spring of the third calendar year, taking around 18 months in all.
When larval development ends, before pupating the caterpillar tends to emerge from its gallery, moving close to the surface of the leaf spine, so that the adult is facilitated in flickering.
The cocoon has an ovoid shape, dark brown in color, and with dimensions of 50–60 by 25 mm; this consists of a more leathery outer layer, made of vegetable fibers resulting from the host plant, and an inner layer of silky fibers, which are secreted by the larva, mixed with the animal’s excrements.
The metamorphosis takes place over a period of 40-70 days depending on the environmental conditions.
The damages, linked to the presence of this insect, can be particularly serious on palms of the Chamaerops and Trachycarpus species as strong infestations can lead to death even all the jambs of a plant.
In Phoenix canariensis, the caterpillars dig tunnels of about 60 cm. of length; in this case in the presence of adult plants it does not compromise their vitality.

Ecological role –
The Paysandisia archon is particularly harmful to the larval stage as it feeds on the plant tissues of the palms by digging tunnels inside the stem and leaf petioles, from which dark brown color emerges.
The caterpillars live by opening the way between the bases of the leaf stalks of Chamaerops and Trachycarpus and, possibly, by digging short tunnels in the jambs.
The caterpillars, especially in the last period of maturity, dig tunnels from which it enters and exits within the host plant.
At maturity the larvae, starting from the mouth of the galleries, cover them with silk for a long stretch and then weave a cocoon in the shelter of the plant.
The chrysalis, in the process of flickering, runs through the section covered with silk and reaches the outlet of the tunnel.
After flickering, the exuads (external coating of the insect that is replaced and abandoned following the moult) of the chrysalis remain for a long time on the plant and are useful for easily identifying the phytophagous (especially on the Phoenix canariensis).
The containment of the Paysandisia archon is neither easy nor easy. The reason is due to the fact that the infestation is located inside the jamb of the palm or leaf stalks, where insecticidal products obviously have difficulty penetrating.
Moreover, at the moment, there are no plant protection products registered against this adversity, so these interventions can only be made products for ornamental plants.
However, the hypothesis, increasingly necessary, for obvious eco-systemic reasons, of activating biological control methods based on the use of entomopathogenic nematodes, typically terrestrial organisms that actively move in search of the host larvae to feed on, both for purposes, is interesting. preventive than curative.
At the moment, in the event that the first infestation hearths have been sighted, the only strategy is to cut down and destroy the affected plants by means of a suitable heat treatment or fine mechanical shredding, making sure that the resulting materials are not larger in size. at 2 cm.
It is important, however, that when the insect is sighted, the phytosanitary services responsible for each municipality or region are notified.