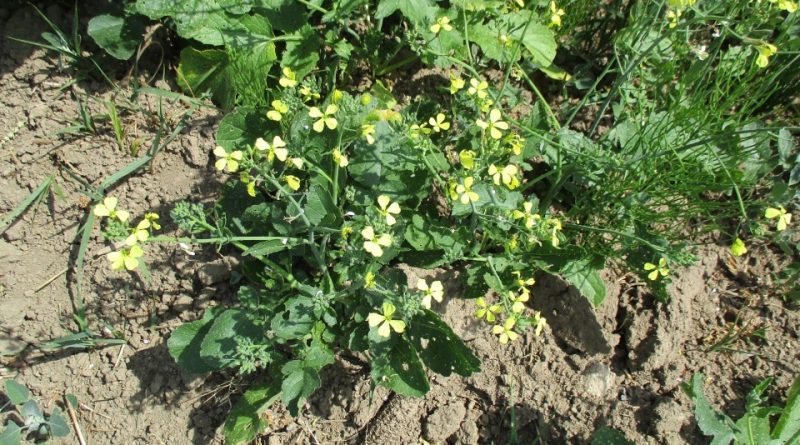 Systematic –
From a systematic point of view it belongs to the Eukaryota Domain, the Plantae Kingdom, the Spermatophyta Superdivision, the Magnoliophyta Division, the Magnoliopsida Class, the Dilleniidae Subclass, the Capparales Order, the Brassicaceae Family and therefore the Raphanus Genus and the R. raphanistrum Species.

Etymology –
The term Raphanus comes from the Greek ῥάφᾰνος ráphanos horseradish, radish, from ῥα rha, contraction of ῥίζα rhiza root, and from the theme of the verb φαίνω phaíno to appear: with visible roots.
The specific epithet raphanistrum is the derogatory of the genus Raphanus horseradish, radish: wild radish.

Geographical Distribution and Habitat –
Wild radish is a sub cosmopolitan species whose habitat is that of uncultivated, vegetable gardens, ruins and at the edges of the roads where it grows from sea level up to 1000 meters above sea level. 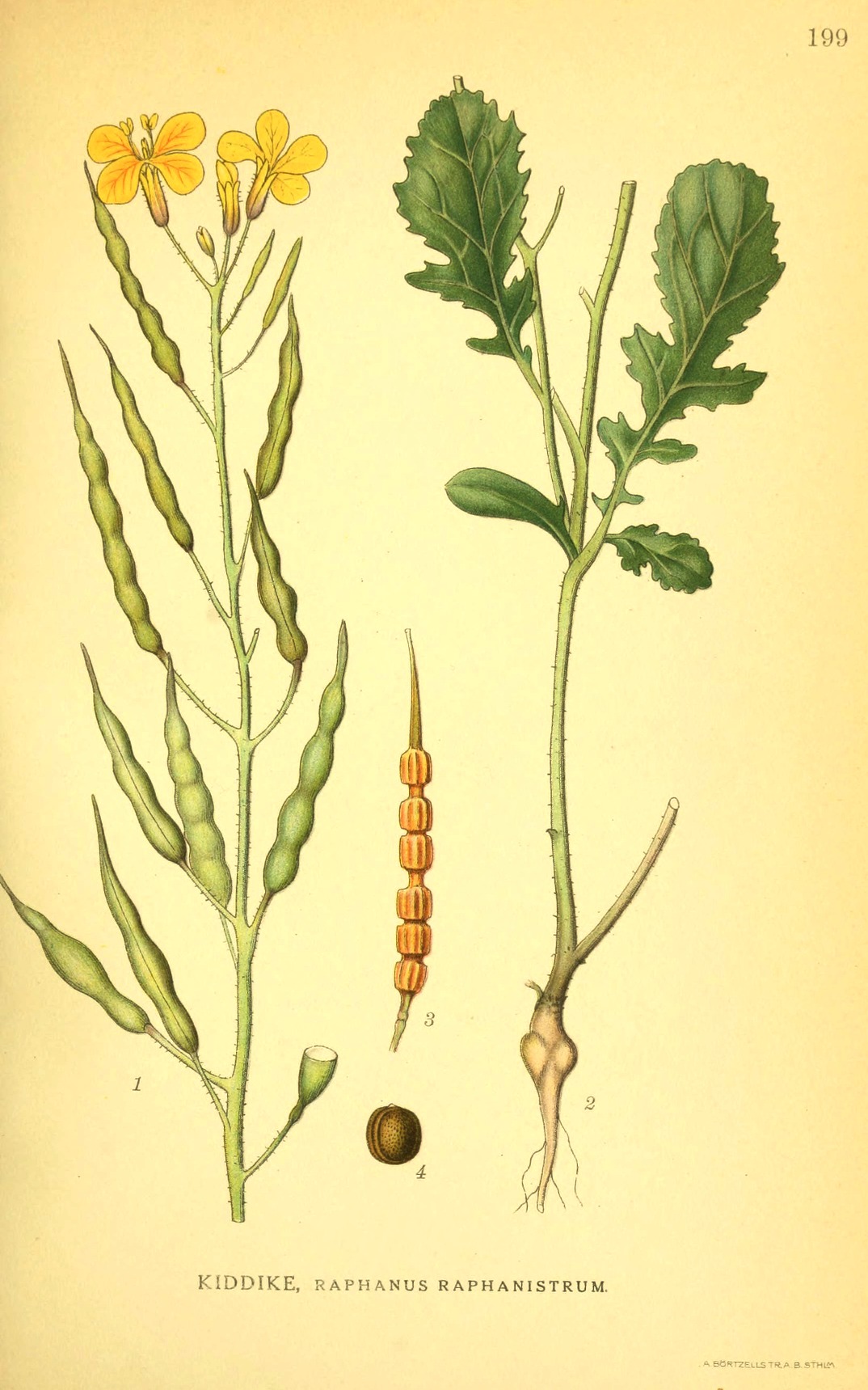 Description –
Raphanus raphanistrum is an annual herbaceous plant, somewhat hairy and bristly, with a stem
kneeling, erect or slightly branchy ascending.
The leaves are lanceolate and multilobed, irregularly indented.
The flowers are gathered in apical panicles carried by a long single pedicel and are white and sometimes yellowish in color.
The antesis is between March and June but in regions with mild winters, flowering can last up to the winter months.
The root is a taproot, rather large and not very branched.
The fruits are erect siliques.

Cultivation –
The wild radish, despite being a spontaneous plant that we can find up to 1000 m above sea level, can be grown as the common radish, so please refer to the cultivation sheet of the latter.

Uses and Traditions –
The Brassicaceae family (together with the Asteraceae) is one of the most numerous of the Angiosperms with about 350 genera and 3000 species, mainly diffused in the temperate and cold belt of our globe. The Raphanus genus includes very few species, two of which are spontaneously present on the Italian territory.
The location of this species within the genus does not agree with all botanists. In fact there are three different proposals to solve this problem:
– according to some authors, the genus has only one species: Raphanus raphanistrum; species which is divided into several sub-specific forms such as: sativus, typicus, niger, microcarpus, and others;
– for other botanists the genus has only two species: Raphanus raphanistrum and Raphanus sativus;
– the third group of botanists (perhaps the most numerous) organizes the genus into a dozen species, then dividing them into two sections which are: Raphanistrum: the siliqua has clear bottlenecks between one article and another (Raphanus raphanistrum) and Euraphanus , where the siliqua is more compact (the bottlenecks between one article and the other are barely detectable), moreover the seeds do not detach from each other when the fruit ripens (Raphanus sativus).
According to other botanists, Raphanus raphanistrum could be the ancestor of edible radishes (Raphanus sativus).
Wild radish however has interesting nutraceutical properties; it is in fact diuretic, purifying, choleretic, tonic and aperitif.
In general folk medicine considers this plant stimulant of gastric and antirheumatic function.
The active ingredients are: sodium, potassium, iron, calcium, phosphorus, vitamins A, C, E, proteins, lipids, tannins, riboflavin, tyramine.
The parts used are the leaf tops and the core and the most suitable balsamic period is between April and August.

Preparation method –
Wild radish can be used in the kitchen using the tops and leaves that are eaten boiled and sautéed in a pan with garlic and chilli pepper, to accompany roast meats, especially sausage, or to season pasta. They can be boiled and combined with beaten eggs, garlic and grated pecorino, preparing very welcome omelettes.
The young leaves can also be eaten in salads together with other raw vegetables (but it is best to cut them finely first). The taste is very pungent and it is often used to make a sauce instead of mustard. Flower buds can be used like broccoli. Furthermore, an edible oil can be obtained from the seeds.