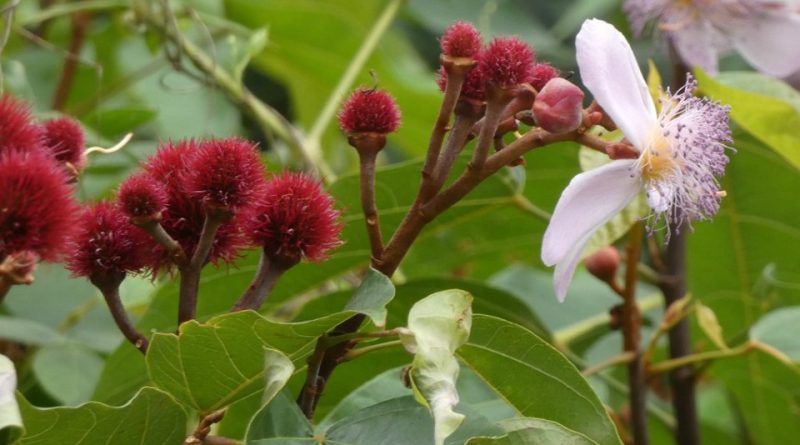 Achiote (Bixa orellana L.) is a shrub species belonging to the Bixaceae family.

Systematics –
From a systematic point of view it belongs to the Eukaryota Domain, Reign Plantae, Sub-Trinchebionta Subdivision, Spermatophyta Superdivision, Magnoliophyta Division, Magnoliopsida Class, Subclass Dilleniidae, Order Malvales, Family Bixaceae and then to the Genus Bixa and the Species B. orellana.

Etymology –
The term Bixa derives from the vernacular name of Central or South America biché or bija.
The specific epithet orellana is derived from the northern-central Ecuadorian province of Orellana, from the name of the Spanish explorer and conquistador Francisco de Orellana (1511-1546) who took part in the conquest of the Inca Empire, explored the Amazon River navigating it from the Andes up to the mouth.

Geographical Distribution and Habitat –
Achiote is a plant native to the tropical area of ​​South America and Mexico and is cultivated in these countries, especially in Brazil, which is the largest exporter. Today the Bixa orellana is cultivated in many countries around the world. 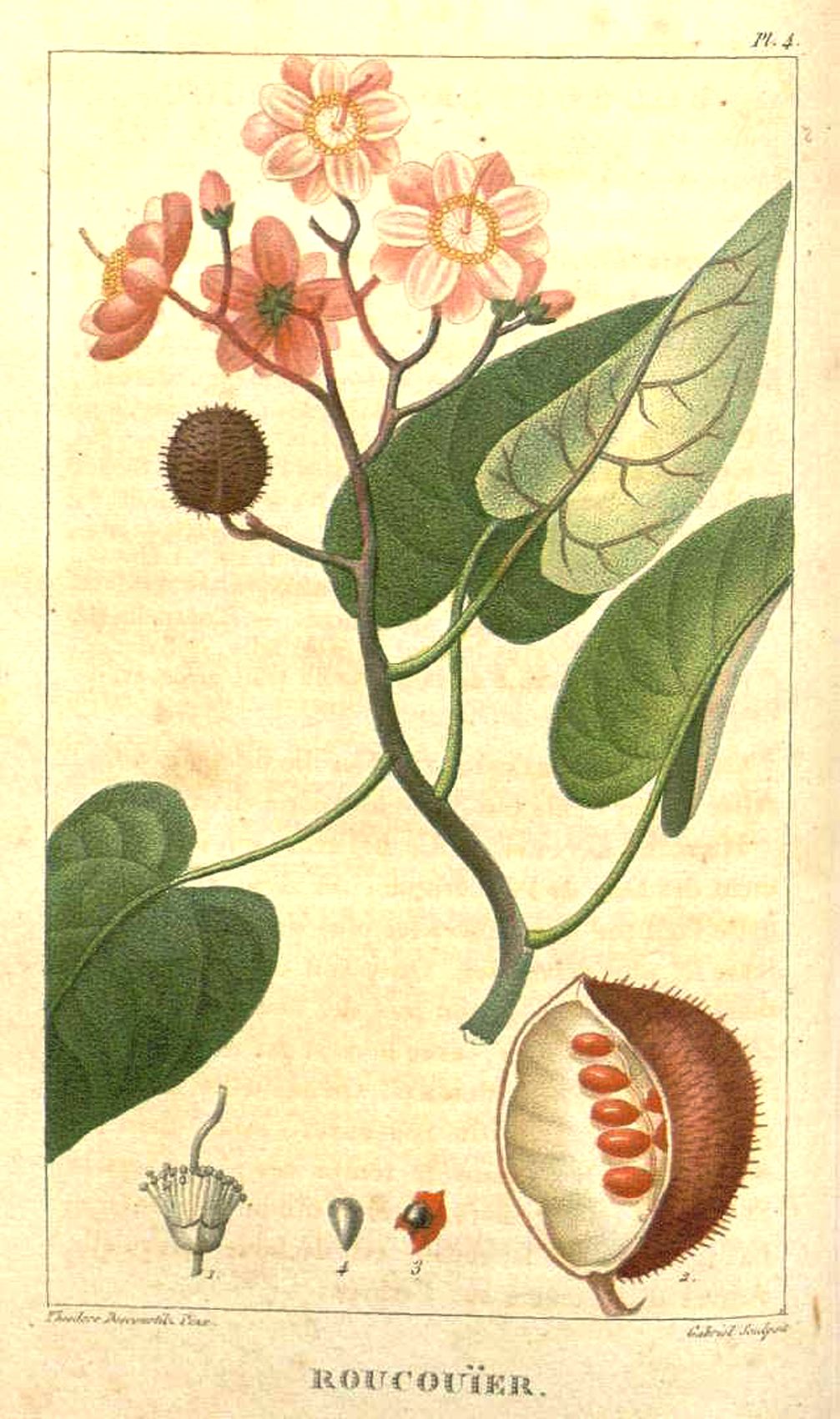 Description –
The Bixa orellana is an evergreen shrub that can reach a height varying from 3 to 10 meters.
The flowers, carried in clusters, have a diameter of 4-6 cm and are white or pink, or a combination of the two colors.
The fruits are ovoid capsules covered with smooth spines and have dimensions of about 4 cm, of variable color from scarlet red to yellow to green / brown to intense red; inside they contain numerous (30-45) fleshy, cone-shaped seeds, covered with a red pulp.
When it is fully ripe, the pod dries, hardens and opens.

Cultivation –
Bixa orellana is a plant that grows easily in subtropical and tropical climates, in regions with freezing winters and sheltered from cold winds.
This species prefers moisture throughout the year, good drainage and moderately fertile soil, with exposure to full sun or shade.
As far as propagation is concerned, this can be done either by seed or by cuttings.

Uses and Traditions –
Achiote is a plant of which several parts (seeds, leaves, roots, flowers) are used for the preparation of decoctions, drinks and compresses for medicinal use. The fruit pulp is also used as a food coloring, insect repellent or to paint body and hair or as lipstick. In some cultures they are also used as an aphrodisiac.
Especially in ancient times, one of the main uses of Bixa orellana was for the painting of the body, face and hair, which were practiced among various tribes and ancient civilizations for decorative purposes or as omens to ward off evil spirits and diseases.
According to some findings it appears to have been used by the native Brazilian tribes, from the native Taínos to Puerto Rico, from the Tsáchila of Ecuador and from various Amazon tribes.
Following the Spanish Conquest, the Bixa orellana was introduced into the culture of some tribes like the Aztecs, the Incas and the Mochicas who also made use of them later. Apparently the Aztecs used annatto as a base pigment for red ink for painting manuscripts in the 16th century.
Annatto or E160b, in the European codification of food additives, is a reddish-yellow dye whose structure derives precisely from the carotene extracted from Bixa orellana.
Bixa orellana is used in traditional medicine and in Ayurveda, the practices of folk medicine of India, where different parts of the plant are considered useful for therapeutic use.
The plant is also appreciated for its stem fiber for making rope mats and for preparing adhesive rubber.
From an ecological point of view, it is a myrmecophilous plant that receives ants in extra-floral nectars and internodes.
From its seeds is obtained a natural dye called annatto or achiote. This dye is used as a condiment and coloring in dishes such as rice, chicken, added to color cheeses, butter, soft drinks.
Its fruits are not edible.
Among the active ingredients contained we recall some dyes, such as carotenoids, vitamin A, triterpenes, flavonoids, amines, tannins, alkaloids, sesquiterpenes.
This plant is attributed diuretic, anti-inflammatory, healing, antimalarial, digestive, depurative, expectorant, cardiotonic, hepatoprotective, antidiarrheal properties.
It is also believed to be useful for the regularity of intestinal transit and carbohydrate metabolism.
Before synthetic dyes revolutionized the industry, Bixa orellana was planted to obtain its pigment; this is extracted from the pericarp of the seeds by first grinding the seeds and then extracting the pigment by using enzymes, solvents or oil (corn oil or soy oil). The solvents used are also alkaline solutions such as sodium hydroxide or potassium hydroxide, as well as organic solvents including hexane, acetone, chloroform and ethanol. Annatto pigments are produced from organic solvent extractions.
Annatto pigment plays an important economic role worldwide as it is one of the most used natural dyes for coloring foods, cosmetics and pharmaceutical products. It is commonly used in foods because the color does not alter the taste and is not, above all, toxic.
Annatto is mainly used to color ice creams, cured meats, dairy products (cheese, butter and margarine) and condiments.
The cosmetic products produced include: lipstick, hair coloring products, nail polish, soaps, lacquers and varnishes.
The annatto tincture, red-orange in color, is rich in carotenoid pigments, 80% is bixin (the red pigment) and norbixin or orellina (the yellow pigment).
Annatto oil is rich in tocotrienols, beta-carotene, essential oils, saturated and unsaturated fatty acids, flavonoids and vitamin C.
In the food sector, ground Bixa orellana seeds are often mixed with other seeds or spices to form a paste or powder for culinary uses, especially in Latin American, Jamaican, chamorro and Filipino cuisines. The seeds are heated in oil or lard to extract their tincture and their flavor for use in dishes and processed foods such as cheese, butter, soup, sauce, meats, cold cuts and other objects. The seeds give the food a delicate flavor and aroma and a color that varies from yellow to red-orange-orange. In Brazil, a powder known as colorau is produced from ground seeds combined with filling seeds such as corn. This powder is similar and sometimes replaces paprika.
The Yucatan dressing called recado rojo or “achiote pasta” is made from milled Bixa orellana seeds combined with other spices and is a mainstay of Mexican and Belize cuisine.
A condiment called sazón is commonly used in Spanish, Latin American and Caribbean cuisine for meat and fish. The Spanish word sazón means “season” or “seasoning”. The sazón is prepared with ground Bixa seeds and packaged in small packets of disposable sheets for easy use. In addition, these packages of sazón condiments include cumin, coriander seeds, salt and garlic powder.
In the Spanish-speaking Caribbean islands, the annatto pigment is also used to produce yellow rice and is sometimes added to sofrito. Furthermore, in the French Caribbean, it is added to a fish or pork stew called blaff.
The main commercial producers of Bixa orellana are Latin American countries (in particular Peru, Brazil and Mexico) which account for 60% of total world production followed by Africa (27% of total world production) and Asia (12% of total world production).
The annual world production of dried annatto seeds at the beginning of the 21st century has been estimated at around 10,000 tons, of which 7,000 tons have entered international trade. Peru is the largest exporter of annatto seeds, about 4,000 tons each year; Brazil is the largest producer with around 5,000 tons. Kenya exports around 1,500 tons of seeds and annatto extracts every year and is the second largest exporter after Peru. Ivory Coast and Angola are also exporters.

Preparation Mode –
The annatto is, as mentioned, a very popular spice in the East and in South America for its natural properties; much less known in the West, but appreciated in the kitchen for being coloring and for providing a strong and decisive taste.
In South American cuisine it is easy to find this spice to accompany and enrich the taste of meat, vegetables and also to flavor soups and is slightly spicy. It is used by the European Union (as E160b) to color butter, smoked fish, margarine, some cheeses known as cheshire, edam and muenster.
In the typical cuisine that characterizes the Caribbean the seeds are fried with oil and then removed; the colored liquid we get is used as a condiment for meat and especially for vegetables. In Vietnam instead the annatto serves to color the curry, and in Mexico it is created an annatto seed paste to marinate the meat.
For use in our kitchen you can choose two ways: to cook the seeds with the other ingredients, or to extract the color using boiling water. Starting from this point you can combine it with any preparation of meat, vegetable side dishes and, in some cases not a little risky, even with chocolate based desserts, to enhance the sweet taste with its spicy touch.
If you want to prepare baked potatoes in a nice terracotta color, add two tablespoons of annatto seeds to half a cup of olive oil and pour it over the potatoes ready to be baked. In Italy, annatto powder is regularly sold and we advise you to buy and add to a good chicken dish accompanied with pancetta and onions.