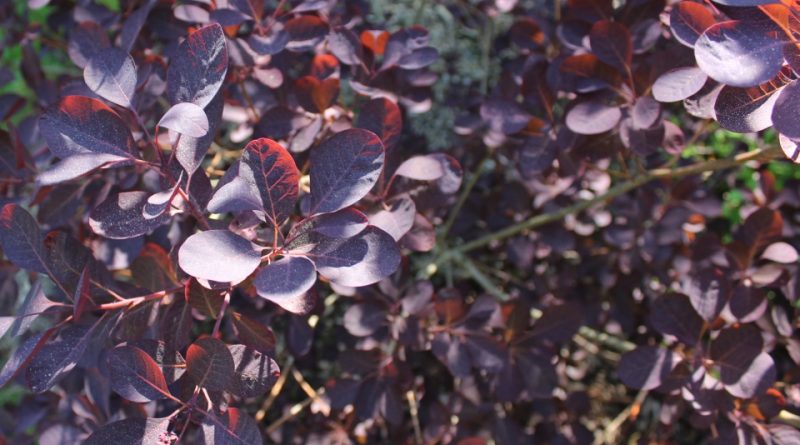 European smoketree (Cotinus coggygria Scop.) Is a shrub belonging to the Anacardiacee family.

Systematics –
From the systematic point of view it belongs to the Eukaryota Domain, United Plantae, Magnoliophyta Division, Magnoliopsida Class, Subclass Rosidae, Sapindales Order, Anacardiaceae Family and therefore to the Genus Cotinus and to the C. coggygria Species.
The term is synonymous: Rhus cotinus.

Etymology –
The term Cotinus comes from the ancient Greek name κότινος cótinos for the oleastro; name that Pliny attributed to an Apennine shrub from red wood and from which a purple dye was obtained.
The specific epithet coggygria is derived from the Greek κοκκυγέα coccygéa scotano, sumac, the ancient name used by Theophrastus for this plant (in Greek “cc” reads “nc”).

Geographical Distribution and Habitat –
The European smoketree is a plant native to southern Europe where it grows spontaneously in environments rich in limestone and has no particular pedoclimatic needs. Its habitat is that of the rocky and arid slopes of southern Europe. 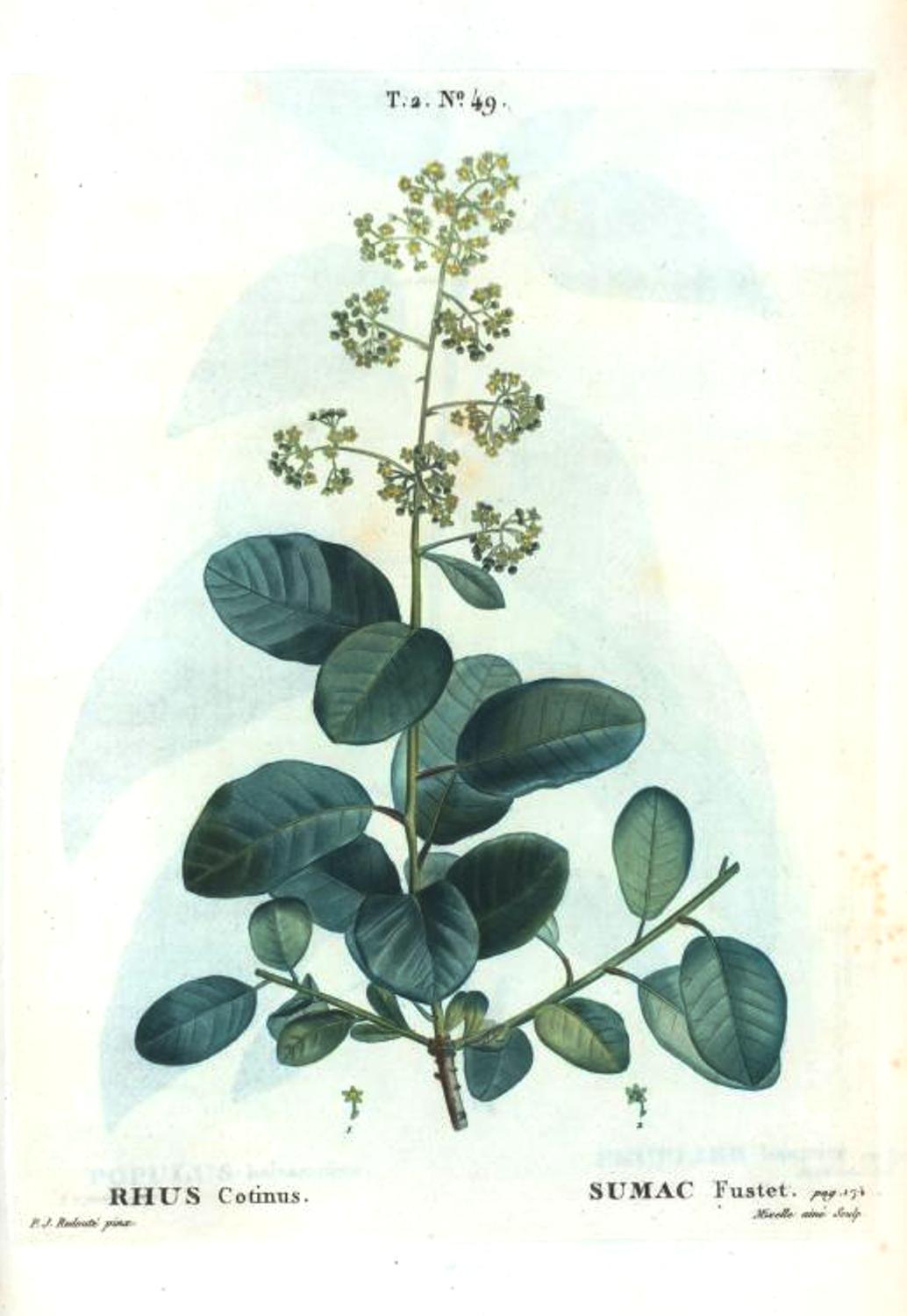 Description –
Cotinus coggygria is a shrubby species that can reach 2-4 meters in height.
The leaves are deciduous, opposite, with a long petiole and a different shape depending on where they are on the plant: at the bottom they are roundish, at the top obovate, which in autumn take on bright red colors.
In ornamental varieties the leaves can be red-purple.
The flowers are small, greenish-yellow, hermaphrodite or unisexual, gathered in open and branched pyramidal inflorescences. Many flowers are in fact sterile and fall early, leaving only the hairy peduncles.
The anthesis is in the period of May – July.
The fruits, gathered in infructescences, are small drupes of 3-5 mm of reddish shiny color and then gray. Like other parts of the plant they contain toxic substances.

Cultivation –
The European smoketree is a decorative shrub that needs positions in full sun, in well ventilated areas. It is a plant that does not fear the cold, and tolerates the torrid periods of July and August without problems.
Even if the plant is not affected by the cold climate, when the temperatures drop considerably, it would be useful to protect the younger plants with mulches to ensure that the roots and the trunk remain protected, given the greater sensitivity of these shrubs.
The European smoketree prefers deep, very well-drained, not too rich soils; however it develops without any problem in any terrain. When planting it, do not forget to mix the soil with river sand to increase drainage, so as to avoid dangerous stagnant water.
Cotinus coggygria should not be over-watered as, as mentioned, it fears water stagnation. For this reason it is advisable to water regularly from March to October, at least every week, letting the soil dry well between one watering and the other.
However, it is a plant that, once grown, can easily withstand short periods of drought. In the winter period you must then suspend the watering.
If the European smoketree is grown in pots then it has some different needs; it will be necessary to provide more irrigation since the land at its disposal will be smaller and it will not be able to benefit from the humidity present in the ground.
As for fertilizing, in the winter period, it is advisable to provide organic substance at the base of the plant.
Finally the multiplication: this plant can be propagated in spring, sowing the seeds of the previous year, possibly in a container; wanting in spring and autumn you can take semi-woody cuttings, which must be rooted in a mixture of sand and peat in equal parts.

Uses and Traditions –
Of the Cotinus coggygria are used, for ornamental purposes, especially the varieties with purple-colored leaves – blue and those with red flowers. In fact the prevalent use is precisely the ornamental one due to the appearance of smoke or mist over the foliage that it takes in summer and autumn.
It can also be found used to form hedges.
As for other uses, the young branches are used to tan the skins, especially from the Colombian monks of the Abbey of San Colombano di Bobbio, who were the first to use it for this purpose since the Lombard era.
In the province of Pesaro and Urbino, between the municipalities of Montefabbri and Mombaroccio, is the convent of the Beato Sante, formerly called Santa Maria di Scotaneto from the scotano shrubs that are found in large numbers in the hill. It was also used for tanning in Sicily, where Giacinto Carini introduced the steam engine for its cleaning. The bark is also used for dye purposes.
Remember that it is a poisonous plant in all its parts.

Preparation Mode –
The European smoketree, in addition to the aforementioned purposes, does not cover particular interests either in the food sector or in the pharmaceutical field.