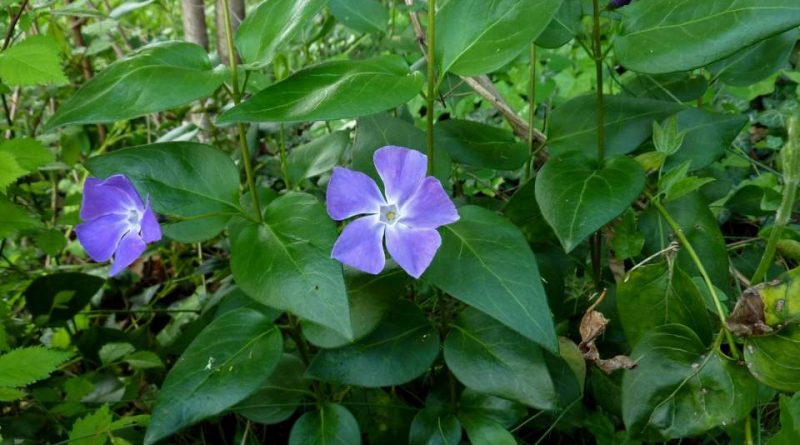 The bigleaf periwinkle (Vinca major L.) is a perennial herbaceous species belonging to the Apocinaceae family.

Systematics –
From the systematic point of view it belongs to the Eukaryota Domain, United Plantae, Magnoliophyta Division, Magnoliopsida Class, Gentianales Order, Apocynaceae Family, Rauvolfioideae Subfamily, Vinceae Tribe, Vincinae Sub-tribe and then to the Genus Vinca and the Species V. major.

Etymology –
The term Vinca is of uncertain etymology: from pervínca (from pervínco extravincere, means diseases), or from pervíncio to cling (with stolons), remembering the custom of the girls of ancient Rome to use this plant to weave their own garlands.
The specific major epithet is the comparative magnus large: greater, larger or longer (compared to other species of the same genus).

Geographical Distribution and Habitat –
The bigleaf periwinkle is a plant native to the European continent and present throughout the Italian territory. It is a native species probably only in central-southern Italy. Widely cultivated and often wild. In the northern regions it is rarely found far from inhabited centers.
Its habitat is that of the woods, hedges, parks, banks on the banks of the rivers, where it grows from 0 to 800 m. s.l.m., with areal centered on the Mediterranean coasts, but with extensions to the north and east. 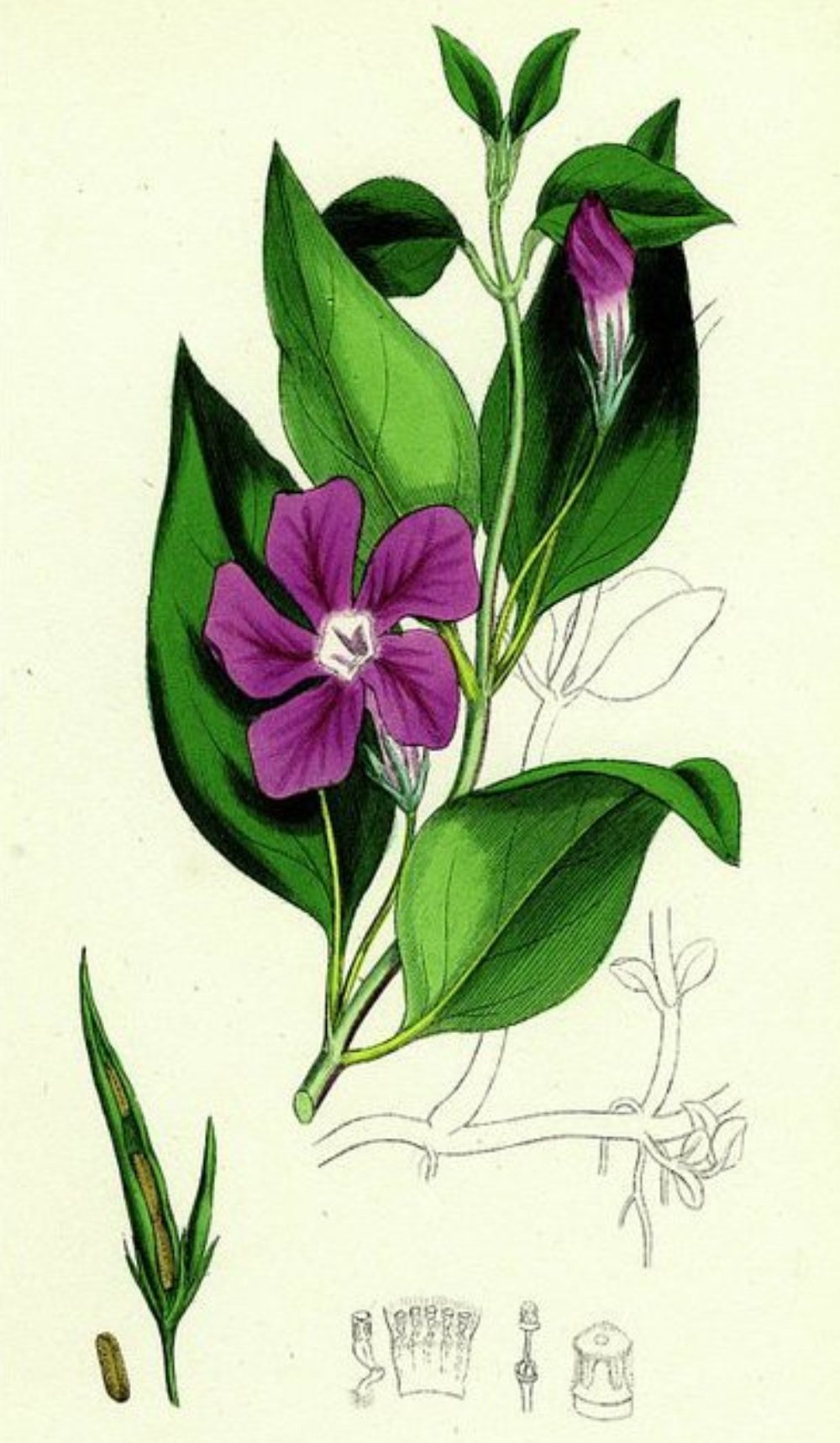 Description –
The Vinca major is a rhizomatous, evergreen, laticifera perennial herbaceous plant, characterized by long stolons, which can reach up to 100 cm prostrate-creeping, with a woody consistency at the base, rooting at the ends.
The flowering stems are herbaceous, erect, up to 50 cm tall.
The leaves are opposite, dark green, slightly coriaceous, ovate-cordate (2.5-3.5 x 3-6 cm), long petiolate (5-15 mm), often sharpened at the apex and finely ciliate (0.5-1 mm) at the edges.
The flowers are actinomorphic hermaphrodites and inserted singly into the upper leaf axil with peduncles of 2-3 cm, shorter than the axillary leaves. These have a glass divided into linear-lesiniform lacinias up to 18 mm long, sub-equal to the corolline tube and ciliate at the edges. The corolla measures 4-5 cm in diameter, is gamopetala, hypocrateriform, of a blue-violet-reddish color, with 5 oblique lobes, patent, truncated at the apex and with a white faux ring. The androceo is composed of 5 stamens inserted on the corollino tube and joined in a single stylus. The ovary is exceeding bicarpellare. Pollination is entomogamous and anthesis occurs in the period of March – May.
The fruits are composed of two fusiform, divergent follicles, dehiscent by ventral suture and the seeds are brown, ellipsoid, without tuft of hair.

Cultivation –
The Vinca major is one of the easily cultivated plants. It should be remembered, however, that despite the ability to survive in the shadows, for optimal growth, it is good that it is exposed directly to sunlight, provided it is in optimal humidity conditions.
It is also a rustic plant that resists low temperatures, which should not fall below 15 ° C.
As far as the watering technique is concerned, this should be done abundantly starting from spring, continuing for most of the autumn, paying attention to any water stagnation in the saucer that the plant would not tolerate; for the remaining part of autumn and throughout the winter, the watering should be such as to keep the substratum moist.
Vinca major can be grown both in the ground or in pots. In the latter case, the ideal substrate is represented by a compost of peat, garden soil and soil; above all, it is better to have a slightly acid reaction. It is also advisable to repot every year, between January and March, taking care to use vessels of increasing size. Regarding fertilization, it is recommended to do it every two weeks, from spring to autumn. The ideal fertilizers are the organic ones with gradual release of nitrogen and with the presence of microelements, especially zinc.
To give the periwinkle a bushy habit, you will have to cut it up to leave some stems that are 10 cm high from the ground. If you decide to grow in a basket, topping is highly recommended. In order to multiply the periwinkle, in the period of March it is necessary to cut the vegetative apexes about 10 cm long, from which you will cut the lower leaves. Then continue by placing the cuttings in the compost of soil and coarse sand, making as many holes as there are cuttings. Cover with a plastic bag, place in the shade and moisten the soil daily. When the first shoots appear, you will move the vase to light, to make the cuttings stronger. Finally, transplant the cuttings into the final pot, using the soil described above, regarding repotting.
For some details of the cultivation technique, see the following sheet.

Uses and Traditions –
Periwinkle is considered a toxic plant, as it contains vincristine.
In case of taking parts of the plant, the early symptoms appear within 24 hours, with nausea, vomiting and fever; late ones, in the first week, consist of headache, insomnia, delirium, hallucinations, neuropathies, convulsions and coma.
If cultivated and used correctly, by expert hands, periwinkle has numerous therapeutic properties. It possesses a substance, vincamine, which would act on vascular disorders, typical of the third age.
In the Middle Ages the periwinkle was also used as a preparation for love filters.
In popular medicine, periwinkle is used internally for the treatment of circulatory disorders, hypertension, gastritis, enteritis, diarrhea and cystitis; as well as being used as a remedy against memory loss and to reduce excessively high blood sugar levels. Externally, however, traditional medicine uses periwinkle as an astringent remedy for epistaxis and bleeding, but not only. In fact, the plant is also used for the treatment of sore throats, abscesses, eczema and ecchymoses.
Periwinkle is also used in homeopathic medicine, where it can be found in the form of mother tincture, oral drops and granules.
In religious symbolism the periwinkle color is called “the color of the eyes of the Madonna” because it is used in various paintings and representations.
The periwinkle has taken on multiple meanings but the most recent would seem, the representation of a new friendship, the condition of spiritual harmony, the fidelity in long-term relationships, suggested probably as a symbol of the adaptability of the small shrub to the different climates and of its development easily with thick cover.
Thanks to its ability to form beautiful and flowery lawns, in Russia it is called the “swallow of flowers”, because its flowering is linked to the beautiful season.
In the seventeenth century in England it was considered a sacred herb to Venus and it was said that if the leaves were eaten by two newlyweds, love between them was propitiated. There was also the custom of making garlands of flowers that were placed around the neck of those who had problems with blood from the nose as it was said to stop bleeding. In Italy, the periwinkle called ‘Centocchio’ or ‘Cento occhi’, was considered the ‘flower of death’ due to the ancient practice of laying garlands on the coffins of deceased children, while it was the ‘flower of immortality in Germany .
In general, this plant has diuretic, astringent, digestive, hypotensive properties. For external use it has anti-inflammatory properties. Besides vincristine it also contains vinblastine.

Preparation Mode –
The leaves can be used against chronic catarrh, enteritis, diarrhea, hemorrhoids, leucorrhoea; remembering however that for the content of vincristine it is to be considered toxic plant in all its parts and therefore to be used under careful medical prescription.