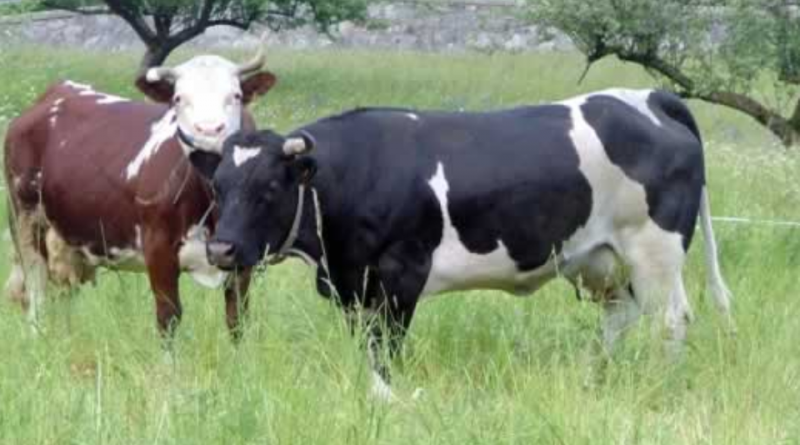 The black spotted Valdostana is an Italian bovine breed (Bos taurus Linnaeus, 1758) originating from the Aosta Valley, with a dual aptitude with a prevalence for milk production.

Geographical and area distribution –
The black spotted Valdostana, called in French Valdostaine pie noire, is a bovine breed that is bred mainly in the alpine areas of the Valle d’Aosta with pastures even above the 2,500 m of altitude.

Origins and History –
The black spotted Valdostana is part of the own cattle breeds of the Val d’Aosta which include in addition to this breed the Pezzata Rossa and the Pezzata Nera which sometimes may have a chestnut-sized coat or, more frequently, a uniform coat. The Valdostana Pezzata Nera and the Castana represent, along with the Hérens breed (Switzerland), the autochthonous bovine group that originally populated the Alpine arc, probably deriving from the “Bos brachyceros”.
Among other things, the stocks of the Valdostana Pezzata Nera and of the Castana are part of the same Genealogical Book, differing from each other in the color of the coat.
The National Association of Bovine Breeders of the Valdostana breed (A.N.A.Bo.Ra.Va.) was founded in 1937.
The black spotted Valdostana is one of the 11 breeds that adhere to the European Federation of Alpine System breeds.
Moreover, the lively and somewhat aggressive temperament of these cows manifests itself in grazing animals that designate a hierarchy within the herd through bloodless combats between them.
For these peculiarities, for over 50 years farmers have been organizing fights between their cows (Batailles de Reines) to designate the strongest and to assign them the title of Rèina (queen).

Morphology –
The black spotted Valdostana has characteristics similar to the Pezzata Rossa, although it is usually less developed, more rustic and more solid and harmonious.
These cattle have a black spotted black and white pigment coat distributed to form the typical size. The coat is free from red hair.
The limbs the ventral region are generally white.
The head and the muzzle are often black with a white star in the forehead.
In general they are harmonious animals of small size and stature with a weight that is on average 700-750 kg for males and 450-800 kg for females.

Production aptitude –
The black spotted Valdostana is a breed classified with mixed milk tendency. It produces a rich content of milk proteins and is highly appreciated in the meat sector.
The milk production is however lower than the Valdostana Pezzata Rossa.
From the data reported, relative to 2003, the 7,094 cows registered in the Genealogical Book have reached an average production of: 2.846 kg of milk with 3.43% of fat and 3.38% of protein.
In general it is then a breed that is perfectly adapted to the difficult breeding environment, with summer pastures in the open air in the Alps, as mentioned, even beyond 2,500 m. of altitude.
In these environments these cattle are distinguished by the high motor capacity in the movements and to graze even in areas with low production and resistance to pathologies.