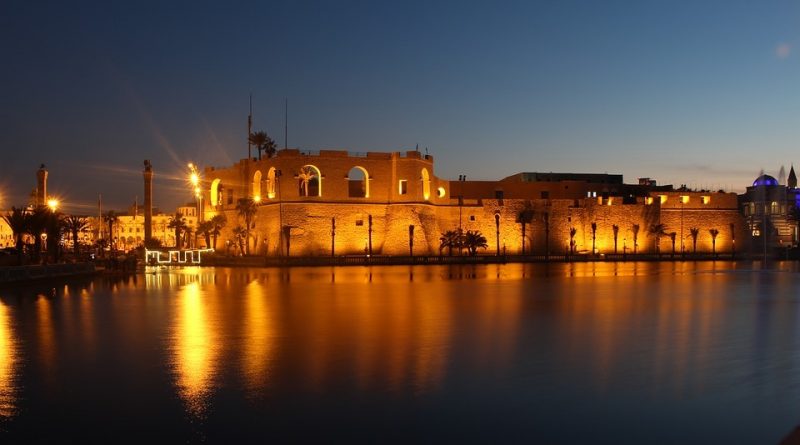 Libya is a state that occupies the central part of North Africa, overlooking the Mediterranean Sea around the Gulf of Sirte.
Libya is the fourth largest country in Africa and is bordered to the north-west by Tunisia, to the west by Algeria, to the south by Niger and Chad, to the south-east by Sudan, to the east by the Egypt. These boundaries have been determined following treaties and conventions stipulated over time by various States including Italy, France, the United Kingdom and Egypt and mainly follow artificial references such as parallels and meridians and almost never natural references such as rivers or mountains.
Libya is characterized by a coast that embraces most of the southern Mediterranean and a mostly flat morphology.
Only to the west, the plateau reaches the sea, creating deep cliffs and inlets. To the east instead the coast is low, adorned with dunes, up to the gulf of a wide and deep inlet, beyond which the cliffs start again.
Libya is characterized by a fairly extensive coastal plain, which rises again as you move towards Fezzan. This plain corresponds to the Gulf of Sirte which is a basin of sedimentary origin characterized, in some points, by altitudes even lower than sea level and by the abundance of industrially exploited hydrocarbon deposits.
In the part of Cyrenaica, which is a historical-geographical region of eastern Libya, there is a plateau already near the sea. The interior is low, up to 250 meters, with the exception of the Tibesti massif, characterized by rocky and sandy desert, dotted with oases.
The major relief of Libya is the Bikku Bitti which reaches 2,267 m s.l.m ..
The territory of Libya is home to Saharan wadis that channel water from the rainy season. In this region the only perennial rivers are the Ki’am, the Ramla, in Tripolitania, and the Derna, in Cyrenaica.
Furthermore, the Cyrenaica plateau has a network of underground waters that resurface in karst springs. Instead, in the desert there are depressions that give rise to small, often salty, lakes.
The climate of Libya is greatly affected by the presence of the desert in the south and the Mediterranean in the north.
In fact, on the coastal region, the temperature is rather temperate, with temperatures in Tripoli averaging around 26 ° C in summer and 14 ° C in winter and with annual rainfall reaching 380 mm, concentrated mainly in the winter months. However, due to the hot winds that blow from the desert into the capital, the summer temperature can exceed 45 ° C.

Inside, characterized above all by plains, the climate is semi-arid, while the desert to the south is subject to long periods of drought. On the coastal strip, generally more humid, the ghibli sometimes blows in spring and autumn, a dry wind, warm and full of sand.

Flora –
The vegetation of Libya is obviously affected by these climatic differences between the coastal area of ​​the Mediterranean, where there is Mediterranean vegetation and the more arid inland areas.
It goes from the Mediterranean scrub along the coast, with olive trees, vines, lentisks, myrtles, carobs, junipers, cypresses, to the semi-desert steppe and then the real desert inside.
Among the tree species are jujubes, deciduous shrubs or small trees originating in southern China and central Asia; also naturalized in the Mediterranean basin, where they grow both cultivated and spontaneously
The neurada, on the other hand, is a pink desert flower, and the Gaussen aizoaceae are a species of yellow cactus with branches.
The date palm is widespread in the oases but olive and orange trees grow. In Arabic, nakhla is the female palm and dhokkar the male palm: all parts of the palm are used.

Fauna –
The fauna is somewhat reduced: there are dromedaries, desert rodents, hyenas, foxes, jackals; in less arid areas live gazelles and lynxes. Insects abound (in particular locusts and butterflies), birds and, in desert areas, scorpions and reptiles (snakes and lizards). In the Libyan desert there is a Saharan fauna. The ergs house fennecs, desert varans, sand fish, reptiles and dangerous sand vipers, while in the wadis there are dorcas gazelles and poisonous sand scorpions. The palm trees of the oases give shelter to turtledoves, swallows and swifts, birds of prey, green mantis and colubri of Mojla.
Among the migratory birds that can be seen in Libya, the ubardian bustard – one of the favorite prey of Libyan and foreign hunters – is unfortunately at risk of extinction.