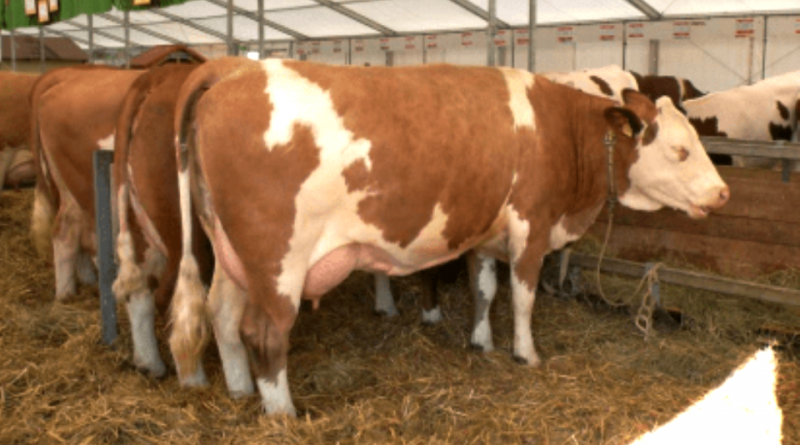 The French Simmental is a bovine breed (Bos taurus Linnaeus, 1758) of the group of red spotted derived from the Simmental, bred above all in central-eastern France, with a dual aptitude for the production of meat and milk.

Origins and History –
The Simmental breed is a cattle breed originating from the Simme river valleys, in the Bernese Oberland in the Canton of Bern in Switzerland; it is a breed whose breeding area is very vast which includes Germany, Austria, Russia, Australia, and Latin America.
Among the oldest and most widely distributed of all cattle breeds in the world, known since the Middle Ages, the Simmental breed has contributed to the creation of several other famous European breeds such as the Montbeliarde (France), the Razzetta d’Oropa (Italy ) and the Fleckvieh (Germany).
The French Simmental (also called Piè Rouge de l’Est) belongs to the Simmental-derived group of Pezzate Rosse races.
This breed was obtained, in the period between the nineteenth and twentieth centuries, by crossing the Swiss Simmental with the local breeds (Bressane, Femeline, Camtoise and Montbeliarde, which all disappeared after 1930, except the Montbeliarde).
This breed has its genealogical book since 1946 which is managed together with that of Abondance.

Morphology –
The traditional color of the Simmental is defined in various ways as: “red and white patches”, “golden and white” even if there is no specific color and the predominant shades range from a pale yellow-gold to a very dark red ( the latter very common in the United States of America).
However the mantle is always spotted red tending to the Byentino, with limbs and ventral region generally white. The head is white (rarely with red spots) and red ears.
The musello is carnicino red.
The horns are short and the hooves of a waxy yellow color.
The height at the withers is generally 1.35-1.40 m. in the cow is 1.40 – 1.45 m in the bull, with a live weight of about 700-800 kg in cows and 800-1,100 kg in bulls.

Production aptitude –
The Piè Rouge de l’Est is represented by animals of large size, massive, and with a slight prevalence for the production of meat but historically used both for milk, for meat and as a draft animal.
This breed is particularly appreciated for the rapid growth of calves, if properly fed. The Simmental has a combined growth rate with weaning and higher milk production than any other breed.
The average production of the controlled cows is around 5,400 kg, with a fat content of around 3.80% and 3.35% protein.