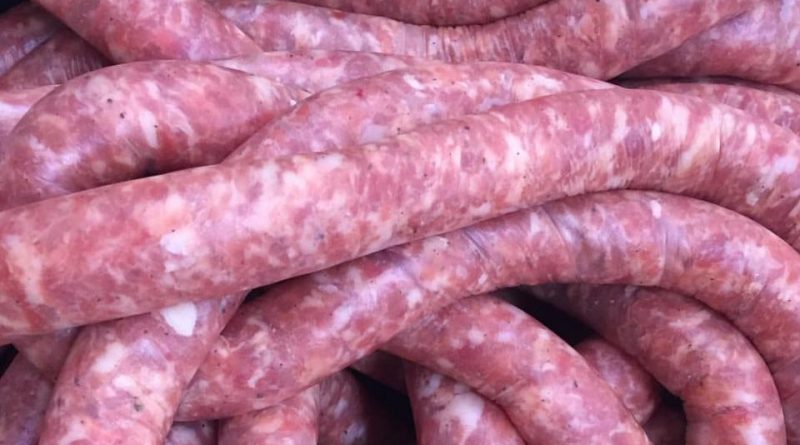 Le Morette or Barbusti from Val Leogra is a traditional food product from the Val Leogra, in the Vicentine Pre-Alps.

Origins and History –
The Morette or Barbusti of the Val Leogra are born and take origin in the nineteenth century when the inhabitants of the Valsugana (in the province of Trento), once slaughtered the pig and products, with noble meat, salami and luganeghe, used the offal of this animal, mixing them with other meat to obtain the so-called “barbusti”. These processed also take the name of “luganeghe” in Veneto which, depending on the area, has variations in the preparation method and in the ingredients used. Lugànega, also known as luganiga or luganica, is the traditional name given in Lombardy, Veneto and other Padano-Alpine regions to fresh pork sausage, similar to the category of sausages.
In Val Leogra, they take the name of “morete” for the typical dark red color, due to the parts of the pig used for their preparation.
The name bears derives instead, probably, from the German Schwarz-Wurst.

Geographic area –
With the name of Morette or Barbusti of the Val Leogra it is therefore intended to classify the production carried out in the Asiago Plateau.

Raw material –
For the preparation of Morette or Barbusti the necessary raw material is given by:
– non-precious parts of pork 50%, bacon 25%, liver, heart and lungs for the remaining 25%.
– technological aids: salt and pepper.
The necessary equipment for the preparation is typically: mincer, containers for mixing the dough, pork casing and stuffer, food string.

Description –
The Le Morette or Barbusti of the Val Leogra are therefore sausages obtained from a mixture of some internal organs and, sometimes, pig’s blood, to which various spices are added. These are smaller sausages than common sausages, being usually about 8 cm long, dark red in color with a very spicy and slightly bitter taste.

Production Mode –
For the preparation of this product, they are ground with a meat grinder, using a plate with 4.5 mm diameter holes, meat (shoulder and bacon), heart and lung (up to a maximum of 20% of the total dough) of pork, previously cut and carefully washed.
To the mixture thus obtained is added a dry salt, pepper, cinnamon and garlic brine mixed. The dough is worked by hand into special containers (marls) and then stuffed into pork gut with a diameter of 40 mm, tied every 10 cm with food string; it is a sausage weighing 130 gr. The fila thus obtained, made to drip and dry at room temperature, is subsequently stored in a cool place for 8-10 days.
In some processes there are variants that involve the use of the heart, kidneys, lungs, spleen, liver and blood of the pig. If the lung is between the offal, it should be ground twice to avoid any air in the dough.
The sausages that are obtained anyway are hung up to dry in a heated room. Preservation, as mentioned, is short term since it is easily perishable meats.
There is therefore no maturation and the sausage should be eaten immediately or frozen.

Gastronomic Use –
The Morette or Barbusti of the Val Leogra are consumed cooked, boiled or on the grill after a few days of production for their quick alterability. In addition to grilled, they can be eaten with sauerkraut and polenta.
These are poor products, packaged almost exclusively for domestic use and therefore difficult to find.