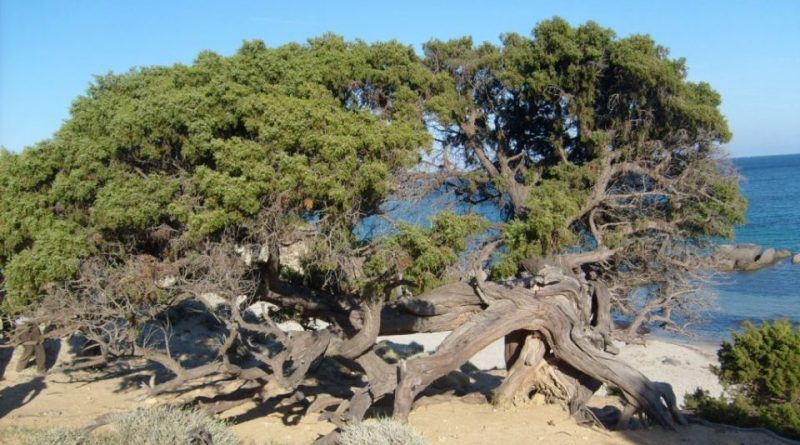 The Phoenician Juniper (Juniperus turbinata Guss.) Is an arboreal species belonging to the Cupressaceae family.

Etymology –
The term Juniperus comes from iúnix heifer and from giving to give birth, to give birth: for alleged properties favoring the birth. The specific epithet turbinata is derived from túrbo, -inis turbines, vortex, spinning top: reference to flower buds, perianthus, fruits etc. .. The Phoenician name, with which it is also named, refers to the Phoenicians or Phenicia according to some , coastal region of the eastern Mediterranean, but probably alludes to the reddish color of its “berries” with the Latin term deriving from the Greek ‘phoinix’ (purple red).

Geographical Distribution and Habitat –
The Phoenician Juniper is an endemic species of Sardinia, Sicily and the Balearic and Canary Islands; it is present in Italy, with two subspecies, in Piedmont, in the coastal regions from Liguria to Puglia and in the major islands; the subsp. turbinata is present in Sardinia, Sicily and in the extreme southern regions of the Peninsula.
In Italy it is common in the western coasts of the peninsula, Apulia, Sicily, Sardinia and Corsica and normally grows on sandy shores and in inland spots between 0 and 600 m. above sea level. 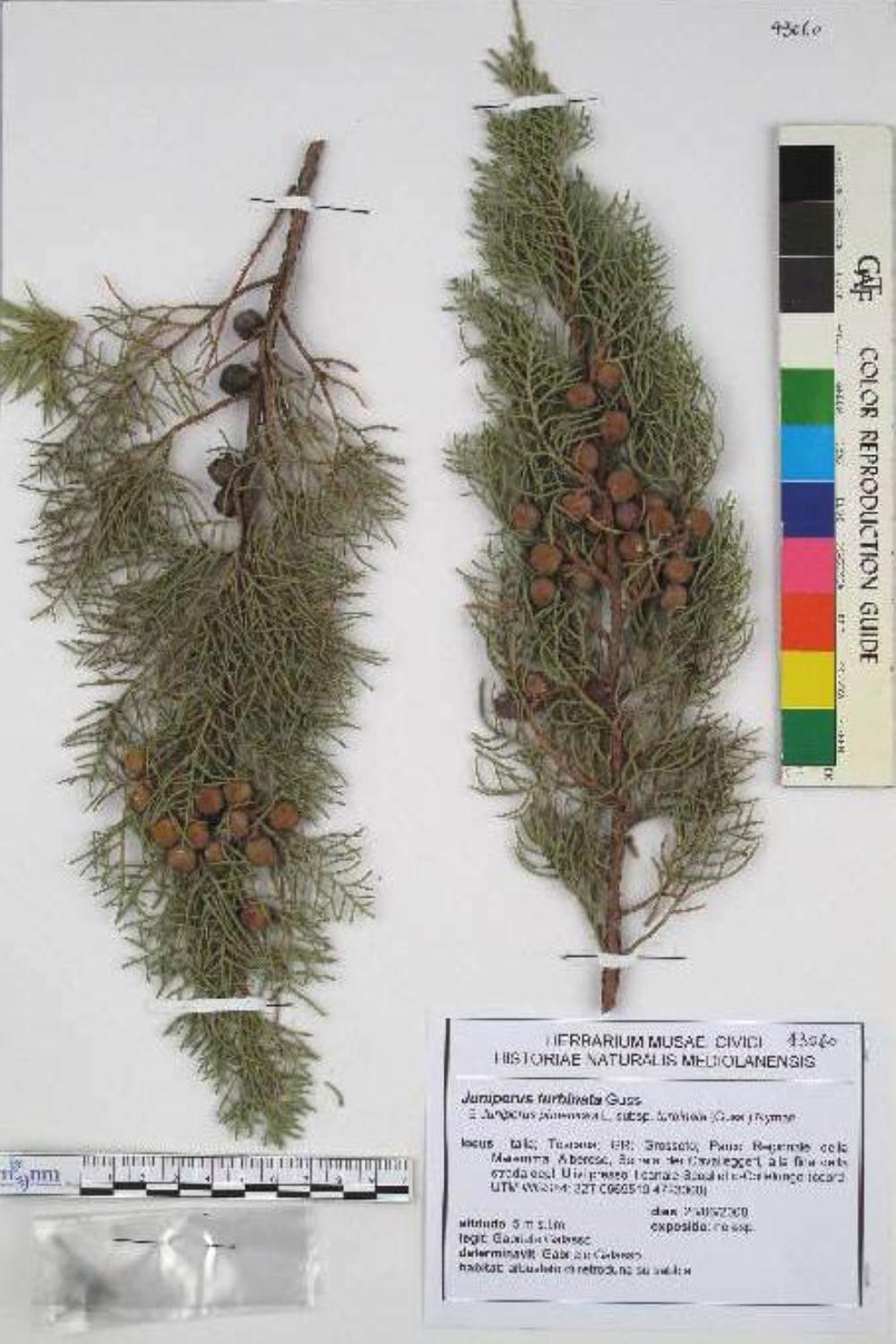 Description –
Juniperus turbinata is a tree, upright, which can reach a height of 8-12, with scaly leaves, more or less triangular.
It has the bark of adult branches that peels longitudinally and in thin sheets. The leaves are scaly, opposite and close to the central axis; the leaves of the seedlings (young plants) are needle-like and pungent. The inflorescences are on different plants (dioecious plant). The male ones are yellow erect spikes, the female ones are larger, with fleshy scales that evolve into a pseudobacca called galbulo (12-14 mm), shiny and red-brown when ripe.
The plant flowers in the period between February and May.

Cultivation –
For the cultivation of the Phoenician Juniper, bear in mind that it is a plant that prefers bright and sunny places but develops well even in semi-shaded positions. The soil on which it can grow ranges from sandy (in fact it also grows in the dunes) to those of medium texture while suffering in heavier and poorly drained soils.
As for water supplies, in general it is satisfied with rainwater but in periods of prolonged drought, and for young plants, it is advisable to carry out emergency irrigations since their root system is not yet well developed.
The fertilization is required almost exclusively before the plant, possibly with mature manure or well humified organic substance.
For the multiplication this juniper reproduces by seed in spring and by cuttings in summer. Seed propagation is not always successful due to the low germination capacity of the seeds and also does not ensure plants with characteristics identical to those of the mother plant. The plant can be easily propagated by cuttings.
Juniper cuttings, about 12 cm long, taken in the summer should be placed to root in a mix of peat and sand. Once rooted, they are bred in a cold greenhouse, in individual containers, for at least 2 years.

Uses and Traditions –
The Juniperus turbinata is also called Ginepro canario or Sabina. In the past it has been considered a subspecies or a variety of Juniperus phoenicea, to which it looks very much; recent studies instead suggest the elevation to the rank of species in its own right.This plant, on the Asinara Island, takes on a shrub shape in the highest areas, such as Monte Ruda, the Castellaccio, Cala d’Oliva and arboreal form in the beautiful junipers still intact of Cala Reale, Campu Perdu and Cala Arena.
The generic name, already in use by the Romans, is of controversial origin: perhaps it derives from the Latin ‘iùnix’ (heifer) and ‘pàrio’ (do to light), alluding to the fact that fact that one of the species (Juniperus sabina L. ) was given to cows to promote childbirth, or from ‘iùnior’ (younger) and ‘pàrio’ (to give birth), because it always produces new shoots.
It is the plant symbol of the island of El Hierro.

Preparation Mode –
The Juniperus turbinata, today, has no particular uses or applications but it plays an ecological role of considerable importance due to its presence in areas that often represent the limit of the arboreal vegetation and that, therefore, play an important function in wildlife and geological protection and defense.