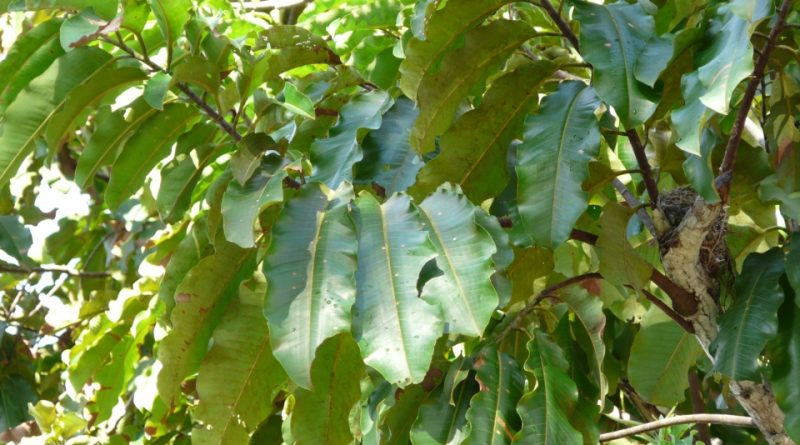 Brazil nut, also known as Amazon nut or Chestnut tree of the Pará (Bertholletia excelsa Humb. & Bonpl.), Is an arboreal species of the Lecythidaceae family.

Systematics –
From the systematic point of view it belongs to the Eukaryota Domain, Plantae Kingdom, Magnoliophyta Division, Magnoliopsida Class, Dilleniidae Subclass, Lecythidales Order, Lecythidaceae Family and then to the Genus Bertholletia and the B. excelsa Species.

Etymology –
The term Bertholletia was attributed to this genus in honor of Count Claude Louis Berthollet (Talloires, 9 December 1748 – Arcueil, 6 November 1822) who was a French chemist and scientist. The special epithet excelsa derives from eccelso, high for superior qualities or because it surpasses.

Geographical Distribution and Habitat –
Brazil Walnut is a species native to the Amazon region of Brazil and grows wild in northern Brazil, in Guyana, Venezuela and in Peru and Bolivia in the Amazon. It is a species that is still present in the spontaneous and uncultivated state. 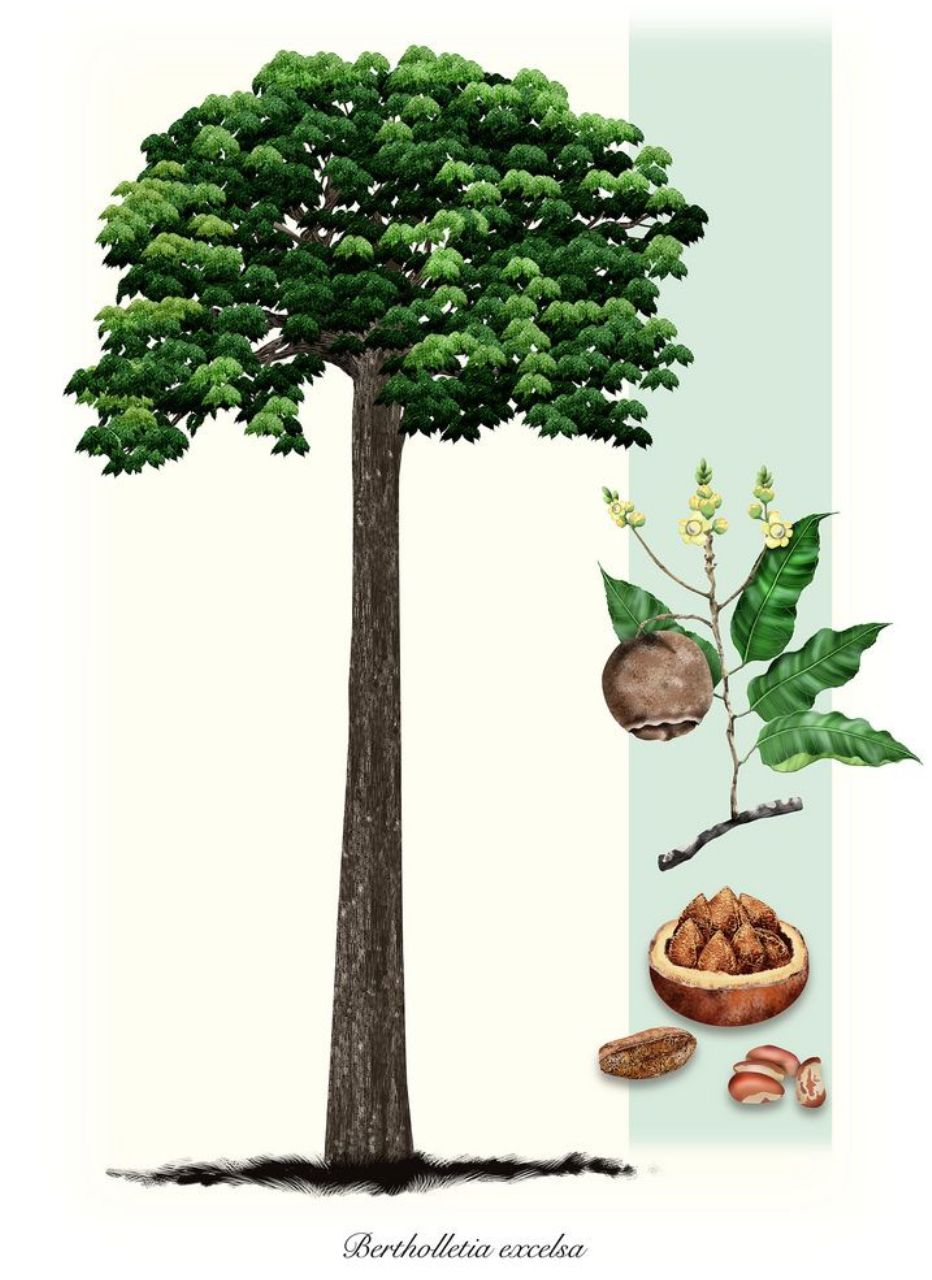 Description –
The Bertholletia excelsa is a tree that can exceed 45 – 50 meters in height, extremely long-lived (can exceed 500 years of life), with a trunk having a diameter of 1-2 m.
The leaves are deciduous, large, alternate, oblong, with a leathery consistency, 20-40 cm long and 10-15 cm broad; the old leaves are pigmented with red near the fall. The flowers are creamy white, small, with a diameter of 2 cm in bloom, solitary or combined in terminal panicles. The fruit is a woody capsule, also called pixidio, more or less roundish, having a diameter of 10-15 cm and a weight of 1-2 kg; the pixidio has a small opening and contains 15-24 triangular nuts, 4-6 cm long, arranged in segments. Maturation takes place between December and March.

Cultivation –
Bertholletia excelsa is a plant that, to date, has not been domesticated, so the production of Brazil nuts comes entirely from wild plants and the fruits are harvested only after they have fallen to the ground.
For this reason, during the harvest periods, particular questions are triggered related to very delicate social and ecological aspects. In fact, despite the harvest taking place without damaging the trees, during the harvest period thousands of gatherers and their families move to the forest areas, with repercussions on the ordinary systemic eco-balance of considerable proportions. Brazil began exporting these nuts only in 1835.

Uses and Traditions –
The tree, locally known as almendro or castaño, due to its height is among those emerging in the tropical forest. The large woody fruits the size of a coconut ripen between December and March, a period that corresponds to the season of greatest rainfall. The rain inflates the spongy epicarp of the fruit which falls to the ground due to the weight and action of the wind. After a few days, due to the effects of microorganisms and insects, the spongy parts are removed remaining the large woody shell of the fruit. In nature, this fruit is only opened by aguti, a large rodent of the forest or, in a longer period, by termites.
During the harvest season, as mentioned, thousands of gatherers, with families, move to the forest areas. Many of these families have wild animal meat as their main protein source. Once the harvest or extraction is finished, many species of mammals and birds are in a critical conservation condition. For example, the local extinction of the spider monkey (Ateles paniscus) was reported due to the impact of subsistence hunting activities.
For this reason the activity related to the harvesting of Brazil walnut cannot be considered ecologically sustainable.
Furthermore, as much as the tree can be cultivated with relative ease in the presence of appropriate climate, the absence of the hymenoptera insect that pollinates it, an exclusively wild insect suitable only for the forest environment, makes it impossible to fertilize the flowers and therefore the production of fruits outside its original areas.
To this we must add the exploitation of the gatherers and workers of the processing plants, to which very low wages are paid and do not enjoy forms of social assistance; these are indigenous or mestizos of generation residing in areas adjacent to forests (most of the mestizos, known as caboclos in Brazil and change in Bolivia, resides in these areas from the era of the extraction of rubber). Moreover, given also the precarious conditions of the places of collection and work, the high incidence of serious tropical diseases, such as malaria, leishmaniasis and yellow fever, the impact on the living conditions of these workers is easily understood. It is therefore the frequent paradox of a product of the world market that enjoys high prices, but which produces few and sectoral benefits for the local populations that collect it.
The nuts of Bertholletia excelsa, whose taste is halfway between those of the common walnut and of the coconut, have the shape of a clove, rough shell and clean margins. They are very appreciated for their caloric value and for the richness of amino acids.
Brazil nuts are real protein bombs and precious sources of energy. They are appreciated for the high content of vitamin E and polyunsaturated fatty acids but, to distinguish them from other oil seeds (equally rich in nutrients), there is above all the very high content of selenium, a mineral that is a very powerful antioxidant and fights free radicals, a cause of aging as well as of various pathologies and which also has antitumor, antiviral and immunostimulant effects.
To fully understand the important contribution these seeds give to our body, it is sufficient to think that experts recommend a daily intake of selenium of 200 micrograms, which is the quantity contained in just 2 Brazil nuts.
Brazil nuts are also used to create shampoos and conditioners because, with their properties, they preserve the health and beauty of hair.
Brazil nuts are often still sold with the shell. To extract the seed the walnuts must be placed in a hot oven for at least a quarter of an hour or frozen. Thanks to the “thermal shock” the shell will come off easily. From the nuts an oil is also extracted but it is not easy to store and goes rancid easily. Although the amount of radium, a radioactive element, is very small, about 1-7 pCi / g (40-260 Bq / kg), and most of it is not retained by the body, this is 1,000 times higher than in others foods. According to the Oak Ridge Associate University, this is not due to high levels of radium in the soil, but to the ability to derive this element thanks to the very extensive root system.

Preparation Mode –
Brazil nuts can be eaten as they are, toasted and are often combined with chocolate in the preparation of desserts and snacks: in fact they have a flavor reminiscent of coconut, notoriously suited to the culinary combination with cocoa.
Although of exquisite taste and of undisputed nutritional value, it is one of those fruits that should never be consumed due to the very high ecological cost associated with its collection.