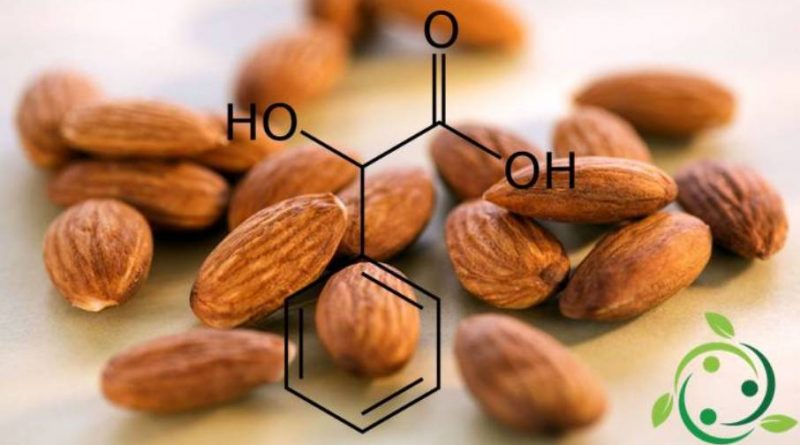 Mandelic acid, whose name IUPAC is: 2-phenyl-2-hydroxyacetic acid and whose alternative names are: phenylglycolic acid or α-hydroxyphenylacetic acid is an aromatic α-hydroxyacid with molecular formula C8H8O3.
In its natural state it is a white crystalline solid soluble in water and in polar organic solvents. Since it has a chiral center, with an active carbon atom, it is available both in the two enantiomeric forms and in the racemic mixture. Mandelic acid is obtained from mandelic acid which is mandelate.
Historically, mandelic acid was discovered by heating amygdalin, which in turn is derived from bitter almonds, with hydrochloric acid.
The name derives from the German Mandel, which in Italian means almond. The first authors to report the formula were in 1909 J.W. Walker and V.K. Krieble.
Mandelic acid is prepared in the laboratory, usually by acid hydrolysis of mandelonitrile, which is the cyanhydrin of benzaldehyde.

The mandelonitrile, in turn, can be obtained by reacting the benzaldehyde with sodium bisulfite with the formation of the corresponding adduct which, after reacting with sodium cyanide, produces the mandelonitrile, which is finally hydrolyzed.
Alternatively, it can be obtained by basic hydrolysis of phenylchloroacetic acid and dibromacetophenone.
Today Mandelic Acid is used as a precursor to various drugs.
Due to its pharmacological properties it has been used, even in the past, as an antibacterial, taken orally in the treatment of urinary infections.
Mandelic acid, from the 70s of the last century, has taken on an important role in cosmetic products, immediately attracting the attention of many researchers; so much so that, even today, it is a prestigious cosmetic ingredient used to lighten and exfoliate the skin.
It is used in dermatology in the treatment of acne, as a soothing for irritation following a laser treatment of the skin, and in aesthetic medicine in the context of chemical peeling in association.
In occupational medicine, mandelic acid plays an important role in monitoring operators exposed to styrene; in fact together with phenylglyoxylic acid, it is a metabolite of this compound, and its determination in urine is used to monitor operators exposed to this pollutant.