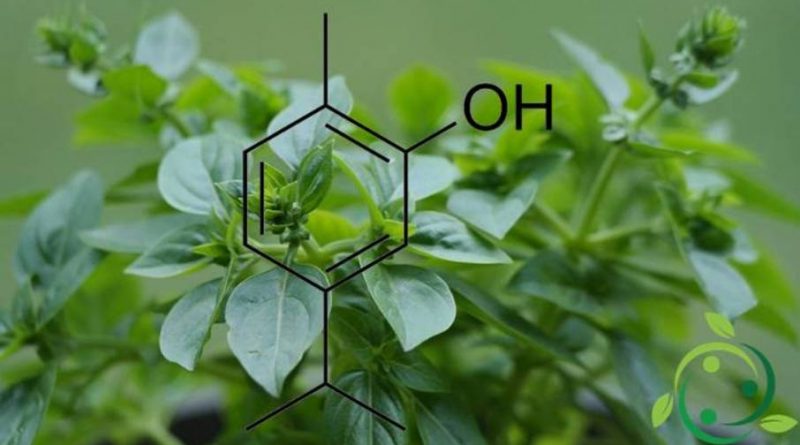 Carvacrol, whose name in the official IUPAC nomenclature is 5-isopropyl-2-methylphenol, has a brute or molecular formula: C10H14O. Carvacrol, also known as cymophenol, is a phenolic monoterpene from the point of view of chemical classification.
Carvacrol, in nature, is found in the essential oil of oregano (Origanum vulgare), in the essential oil of thyme, in the oil obtained from Lepidium, and in another plant of the Labiate which is the Monarda fistulosa.
The carvacrol content varies, in the plant species in which it is present depending on various aspects but also varies within some subspecies of thyme, being able to vary between 5% and 75%; in the Satureja subspecies it varies between 1% and 45%. In marjoram (Origanum majorana) and in Origanum dictamnus it is very abundant, with percentages that are respectively 50% and 60-80%. We find it however also in tequila.
Carvacrol is the substance responsible for the characteristic smell of oregano and is the regioisomer of thymol. To obtain carvacrol it can be extracted from oregano oil by means of a 50% potassium chloride solution. , the carvacrol can obviously be obtained also synthetically, through different ways. A reaction is that which occurs through the fusion of sulfonic cimol with caustic potash; or by reaction between nitrous acid and 1-methyl-2-amino-4-propyl benzene; by prolonged heating of camphor with iodine in a 5: 1 weight ratio; or by heating the carafe with glacial phosphoric acid, or, again, by performing a dehydrogenation of the carvone with a catalyst Pd / C.
Even though carvacrol is still not widely known, many of the properties of oregano are now known, from which it is extracted naturally.
Studies have now shown that carvacrol, its active ingredient, offers a wide range of health benefits, including protective effects for the liver, antioxidant effects, activity against harmful organisms. Some research has led to the following results:

– carvacrol activates heat shock proteins, which through T lymphocytes block joint inflammation caused by the bacterium Escherichia coli;
– carvacrol plays a role in the apoptosis of cancer cells in prostate cancer;
– in vitro the efficacy in the inhibition of the enzyme acetylcholinesterase (AChE) was measured, in order: thymiohydroquinone, carvacrol, thyminoquinone, essential oil, thymol, linaol. Although they are very similar molecules, carvacrol was 10 times more potent than thymol;
– carvacrol has higher genotoxicity and cytotoxicity than thymol, however mild; and both have equal protection of DNA strands in the long term (24 h) from oxidative-induced lesions (hydrogen peroxide used on V79 hamster lung cells, and in humans on Hep G2 liver cells and Caco-2 colon) .
The uses and applications of carvacrol, obviously open many borders.
A study sought to compare the antimicrobial effect of carvacrol with chlorine in washing tomatoes and grapes. For the experiment, tomatoes and grapes were contaminated with Salmonella and then washed with chlorine or carvacrol. The solution with carvacrol has achieved significant reductions in Salmonella. The researchers also noted that the natural solution did not affect nutritional value, antioxidant content, appearance or taste. Several experiments repeatedly confirm the efficacy of carvacrol against Salmonella, e. Coli, Campylobacter jejuni and Listeria. It has been so successful, the researchers decided to measure carvacrol with an even more serious problem: resistance to Salmonella antibiotics. When it was tested on celery infected with Salmonella, carvacrol removed the Salmonella colonies immediately. It is believed that this action is an alternative to keep food away from harmful organisms. It has also been tested in Candida infections on prosthesis wearers; the results showed that carvacrol is very effective against candida and oregano oil was promoted as a natural remedy to fight Candida.
The oxidation of LDL cholesterol leads to its accumulation along the walls of the arteries. The essential oil of oregano is one of several vegetable oils, which has shown protective effects against the oxidation of copper-induced LDL. The most marked effect was observed with oregano oil and the activity was attributed to carvacrol.
Other studies and researches are trying to understand the role of carvacrol in blood sugar levels, in reducing redness due to almost all forms of irritation and, moreover, its effectiveness as a surface cleaning agent is observed.