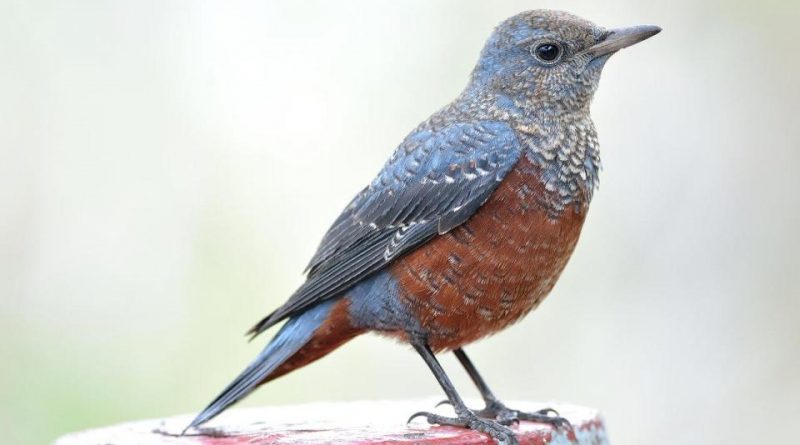 The Blue Rock-thrush (Monticola solitarius Linnaeus, 1758) is a passerine bird belonging to the Muscicapidae family.

Geographic Distribution and Habitat –
The Blue Rock-thrush is a widespread bird in southern Europe, northern Africa and central Asia; in Italy, except in the Po Valley, where it is rare to meet it, it is found wherever there are rocky and sunny walls. In any case, the distribution area is very wide: it ranges from the Mediterranean to North Africa through the countries of southern Europe up to the Arabian peninsula, including Italy, the Balkans, Greece and Turkey; still, the species is also present in India, Tibet and Indochina; then in the Far East to Mongolia, China and Japan. The Blue Rock-thrush reproduces in the south of Europe and in the northwest of Africa; from central Asia to northern China to Malaysia; both in areas with warm, temperate and dry climates, both Mediterranean and steppic. It frequents rocky mountain areas, characterized by the presence of cliffs, as well as cliffs and precipices, rocky valleys and precipices.
In southern Italy and in other strictly Mediterranean contexts it also frequents inhabited places or in any case marked by the presence of man. Here the species is quite abundant, especially in Sicily. In winter, sometimes it also goes down to villages, villages or lower altitudes. To confirm its adaptability even in heavily anthropized contexts is the nesting registered in large urban centers.

Description –
Monticola solitarius is a small bird with a size of about 23 cm, and weighs about 60 grams, with a fairly obvious sexual dimorphism; the male, in the summer period, is dark blue, which becomes brighter with the approach of the mating season, with darker wings and tail, while the female is bluish brown on the back, light chest that gives on the brown. The beak is long and thin and the black legs.
The Blue Rock-thrush is a shy and shy bird that often goes unnoticed; in spring it awakens in all its vitality and, in the mating season, in fact, the male chooses and delimits a territory, of which a companion will soon be part. 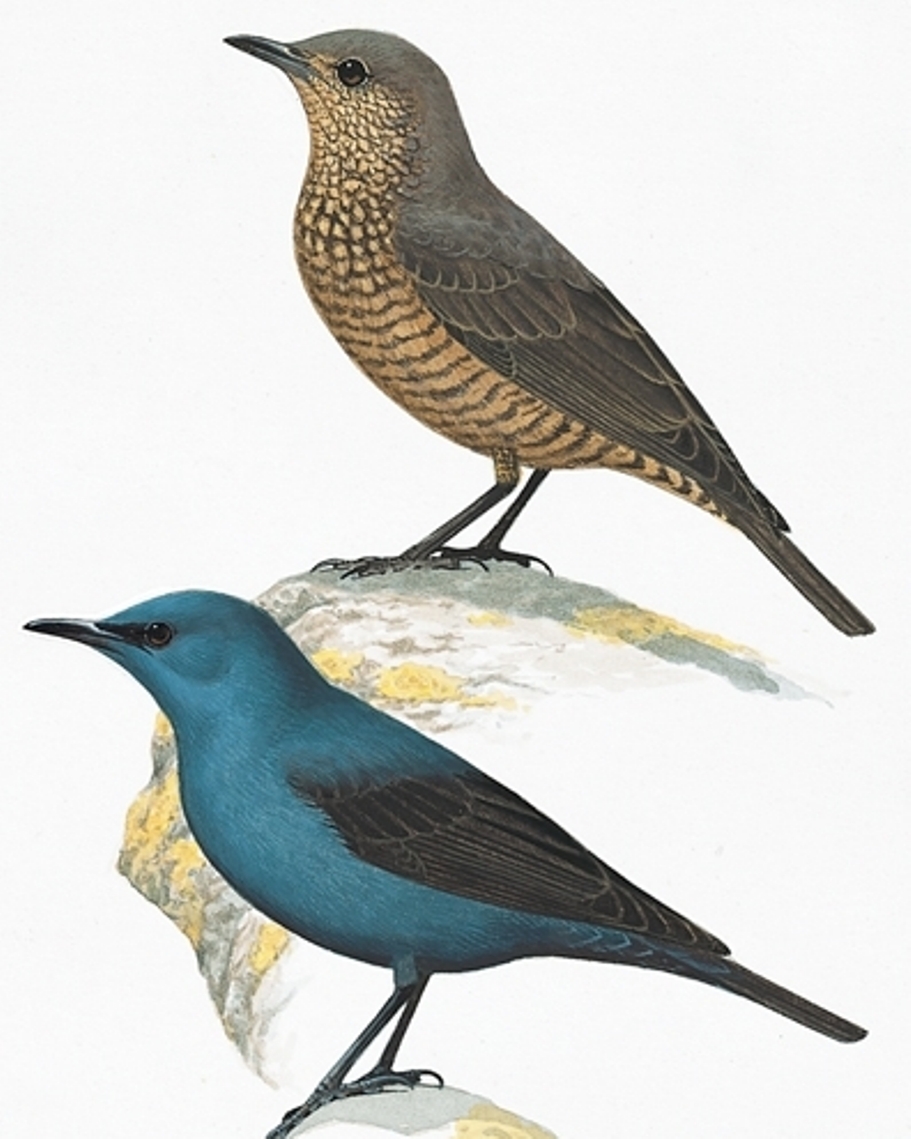 Biology –
The Blue Rock-thrush, usually, builds the nest inside rock cavities, natural ravines, walls of old buildings and ruins located in the suburbs of the city, in the multi-storey buildings under construction; or cemeteries, castles, churches, uninhabited houses and monuments; never, however, on trees. They are in fact the spaces designed to accommodate windows, doors and other domestic cracks to attract the attention of the species in the reproductive phase. Initially formed of a broad and coarse base, the nest is gradually completed and covered, patiently, with fine and thin rootlets and natural fibers. A fundamental condition is that it is placed in an area of ​​penumbra, where it does not directly receive the light of the sun and the brightness is attenuated or even absent, until it verges on the darkness.
The species lays eggs, usually from 3 to 5, of light green color tending to blue, free of spots; very similar to those of the Black Starling, but smaller in size.

Ecological role –
The Blue Rock-thrush loves to stand on perches, natural and artificial, from which it shows off singing and observing meticulously the ground in search of some prey.
He prefers places near cliffs overlooking precipices, the sloping corner of a high ruin, or the large branch of a tree. In the absence of fixed points, however, sings in flight with a characteristic and slow movement of semi-enclosed wings, and then glide gently on the branch of an old tree.
Monticola solitarius is a bird that plays an important ecological role that, the use of herbicides and insecticides, has forced this species to populate also large urbanized areas.
It has an extremely varied diet that includes a heterogeneous quantity of invertebrates: spiders, cockroaches, grasshoppers, locusts, crickets, earthworms, snails and, despite its small size, also vertebrates with contained dimensions such as geckos, snakes, frogs and mice .
The decrease in agricultural areas creates considerable ecological problems as some small animals, notoriously limited by this sparrow, can also create particular problems to the crops, for example. snails or grasshoppers.