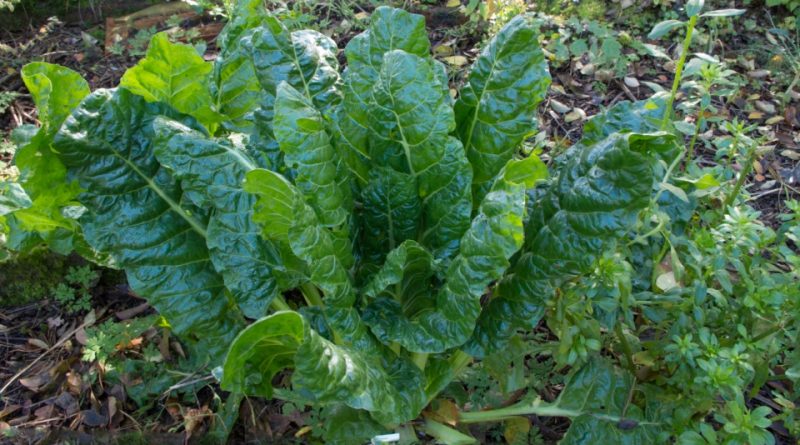 Beet (Beta vulgaris L., 1753) is a herbaceous species belonging to the Chenopodiaceae family.

Systematic –
From the systematic point of view it belongs to the Domain Eukaryota, Kingdom Plantae, Subarign Tracheobionta, Superdivisione Spermatophyta, Division Magnoliophyta, Class Magnoliopsida, Subclass Caryophyllidae, Order Caryophyllales, Family Chenopodiaceae and then to the Genus Beta and to the Species B. vulgaris.

Etymology –
The term Beta comes from the ancient Latin name in Pliny, Cicero and others, perhaps derived from the Greek βλίτον blíton beet (in Teofrasto). The specific epithet vulgaris derives from vúlgus volgo: very common, ordinary for the great diffusion, banal.

Geographic Distribution and Habitat –
Beta vulgaris is a species of Mediterranean Euro origin in an area centered on the Mediterranean coasts, but with extensions to the north and east in the same area of the Vine. 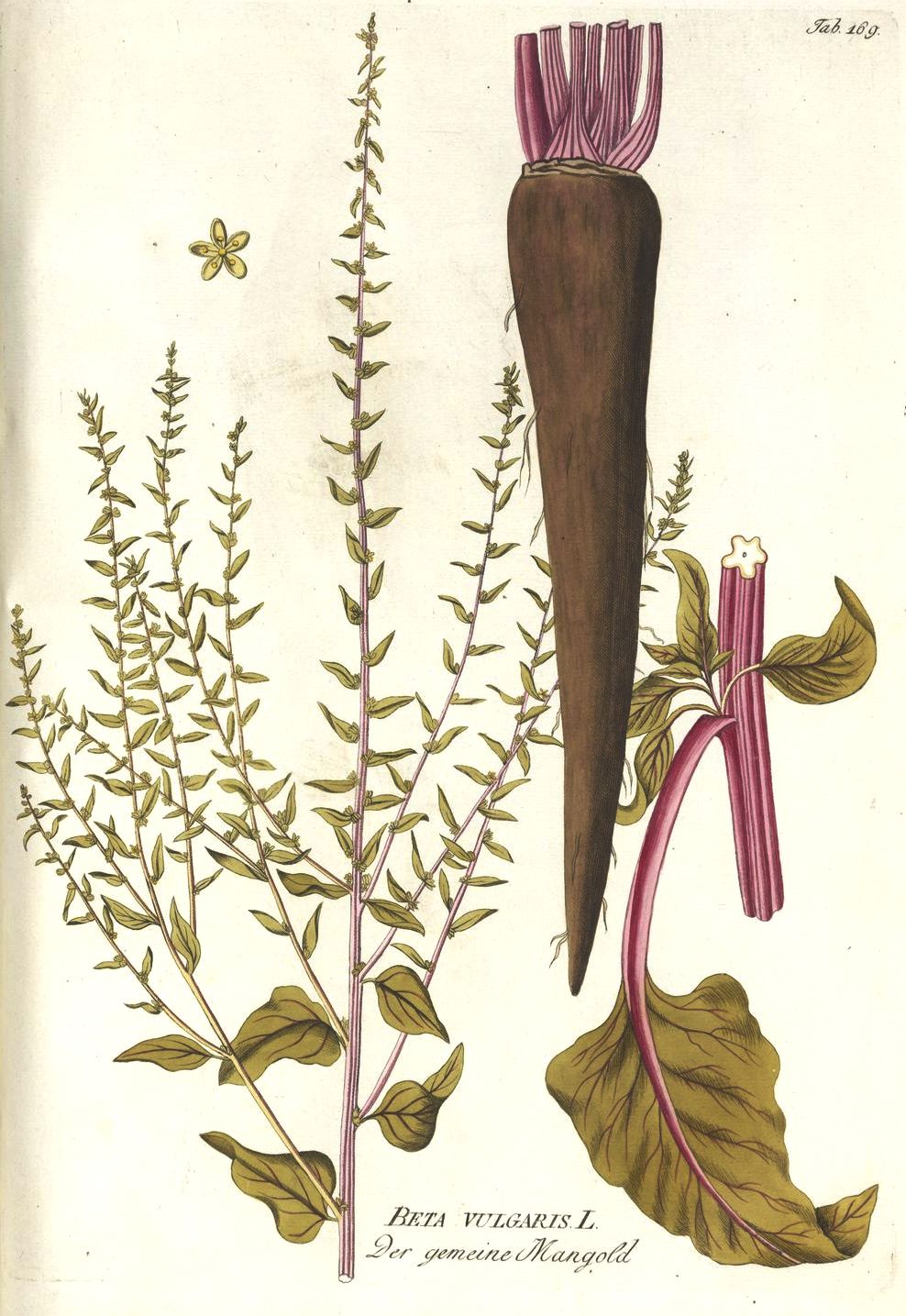 Description –
Beetroot is a two-year herbaceous species with hardy roots, rarely perennial. The stems can reach a height of 1-2 m. The leaves are heart-shaped, 5-20 cm long in wild plants, but larger in cultivated varieties. The flowers are very small, with a diameter of 3-5 mm, green or reddish, with five petals; the flowers are gathered in dense ears; pollination is anemophilous. The compound fruit is a catoclesio formed by the perennial fruit trees grown, which have become succulent, firmly joined together, with a lenticular seed, of a reddish brown color, of 2-3 mm.

Cultivation –
Beta vulgaris is a plant that likes medium-textured soils, neutral or slightly alkaline and, above all, well-drained; however, it is one of the agrarian species that best adapts to the clayey soils, provided they are well cared for and arranged for the disposal of the circulation water.
Beetroot is a plant that is grown mainly in temperate countries. It is a biennial species that, in the first year, allows the accumulation in the root of reserves in the form of sugar, while in the second year the flowering stem develops. In cultivation, in order to extract the sugar, the plant is eradicated at the completion of the development of the first year.
In cultivations carried out in more northern areas the beet is sown in spring and harvested from the end of August. In the south, to reduce the contractions of yield in roots and sugar, due to the increased intensity of respiratory processes caused by higher temperatures, it is instead cultivated in autumn-spring cycle, with harvesting in summer.
Cultivation in Europe today stands at 120 million tons of beet, with a production of 16 million tons of white sugar; the major producer countries are France and Germany and with the exception of Luxembourg, all the countries of the European Union extract sugar from beets in such quantities as to satisfy 90% of the needs.
In Italy, beetroot is grown especially in the Po Valley and in the provinces of Ferrara, Ravenna, Mantua and Rovigo.

Uses and Traditions –
Beta vulgaris, has a long history of cultivation dating back to the second millennium BC. The cultivated forms were selected starting from wild forms along the coasts of the Mediterranean and then spread from Babylon (from the eighth century BC) to the Far East. The beet, also called herb or beet, in its original species was the subject of food collection since prehistoric times, being spread spontaneously in the sandy coasts of the Mediterranean basin. The plant was so precious, that the selection to obtain larger leaves began even three thousand years ago by the Babylonians. Over the centuries, the garden herbs have been derived from the original plant, the coasts, the red turnips and the sugar ones. Biete also studied therapeutic properties, as reported by the “tacuinum sanitatis” of the 14th century: “… their juice removes the dandruff from the head and loosens the belly …”
Aristotle and Theophrastus already mention beets grown for the production of edible leaves. In Rome they speak Pliny the Elder and Columella. In fact, Beta was used not only as food but also as a medicine. Already in the fifteenth century its cultivation was widespread, especially in the monasteries. Initially it was cultivated for its leaves, then also the consumption of the root (especially the red variant) spread. It is necessary to reach 1747, by the Prussian chemist Andreas Sigismund Marggraf, who proved that the sweet crystals extracted from beet juice had the same characteristics as those of sugar cane; but the chemist did not go any further. It was his pupil, Franz Karl Achard, who began the commercial production of beet sugar, with the opening of a first factory in 1801 in Cunern, Lower Silesia.
Beet has assumed considerable commercial importance in Europe since the mid-nineteenth century following the extensive cultivation of sugar beet in Germany, which provided an alternative to tropical sugar cane. Today there are several cultivars, some cultivated for the leaves, others for the roots edible from cooked, others for the production of sugar.
Then the Napoleonic wars were followed, with the blocking of the import of cane sugar in 1806 to speed up experimentation and cultivation of the beet.
The cultivation of beet is also linked to its many varieties; they exist from sugar, vegetable garden, fodder and others intended for the feeding of livestock. Among the varieties we mention:

Beta vulgaris, in addition to being rich in sugars, minerals and vitamins and other useful substances, has dietary and healthy properties: it absorbs toxins from cells and facilitates their elimination, is purifying, mineralizing, antiseptic, restorative, promotes digestion , stimulates the production of bile and strengthens the gastric mucosa, curates anemia, infections of the cerebral system, stimulates the production of red blood cells, dissolves calcium deposits in blood vessels and prevents the hardening, finally stimulates the lymphatic system.
The components present are: sodium, potassium, iron, vitamin A, vitamin C, fiber; In addition, all types of beet contain antioxidants and a significant amount of oxalic acid and nitrates. Recent scientific research has shown that the presence of nitrates in red beets has a hypotensive effect.

Preparation Mode –
The edible parts of the beet are the leaves (beet or chard) and the roots. Today we find the beetle present throughout the Italian regional cuisine, usually used cooked.
The ways of preparing and cooking beet are related to the innumerable varieties; for this reason we find recipes that include the use as raw and cooked vegetables, salads, stuffing for ravioli, pizzas, bread dough, soups, minestrone, omelettes, soups.
In recent years, the use of beet juice has also spread due to its preventive properties on liver, kidney, pancreas and also ulcers; strengthens the lungs, prevents heart attack and lowers high blood pressure; strengthens the immune system; also it seems that it is excellent for the eyes and the eyes, eliminates the red and tired eyes and the dry eyes; helps eliminate fatigue from too much physical activity and muscle pain; it also has a detoxifying action, and helps intestinal motility, eliminating constipation.