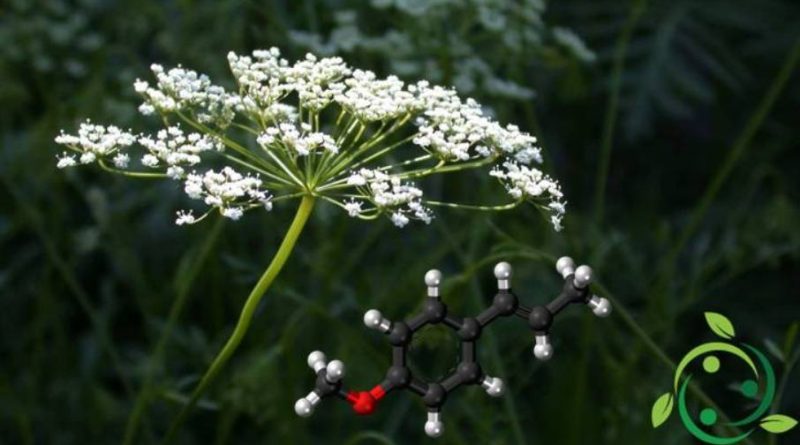 The anethole whose name in the IUPAC nomenclature is: (E) -1-methoxy-4- (1-propen) benzene is a very common aromatic compound in nature, in essential oils. From the chemical point of view, anethole is an aromatic unsaturated ether with the brute or molecular formula: C10H12O and is a colorless liquid.
Anethole has two isomers (cis and trans forms) compared to the double bond external to the ring. In nature the most abundant and used isomer is the trans.
Anethole is the compound that gives the characteristic taste of dill (the plant from which it takes its name), anise and fennel.
The anethole is less soluble in water than in ethanol, a characteristic that causes the ouzo effect in some anise-flavored liqueurs when diluted with water; to be precise, that phenomenon of the transformation of the clear to milky drink typical of alcoholic products such as Pastis or Sambuca.
This clear and colorless liquid has the boiling point at 234 ° C and melting point at 20 ° C and below the melting point it creates crystals.

These crystals tend to precipitate (snow effect) in the aqueous solutions of some anise-based liquors when ice is added.
In the industrial field this effect is the basis of a process for the industrial purification of anethole from sources such as pine oil.
Anethole has many industrial uses and its main sources are mainly green anise (Pimpinella anisum), star anise (Illicium verum) and fennel (Foeniculum vulgare).
Anethole is also present in the essential oil of guarana, which is believed to have psychoactive effects, even if the psychoactive effect does not seem to be related to the presence of anethole.
The main uses of anethole in the agri-food industry are due to the fact that it has a sweetening power 13 times greater than sucrose and is perceived favorably even at high concentrations. Anethole is also used in alcoholic beverages, in the confectionery sector and for seasoning foods. Another increasingly frequent use is that of oral care products.
Since anethole is also an economic precursor for the synthesis of paramethoxyfamamine, it is unfortunately used in the illegal production of this narcotic substance.