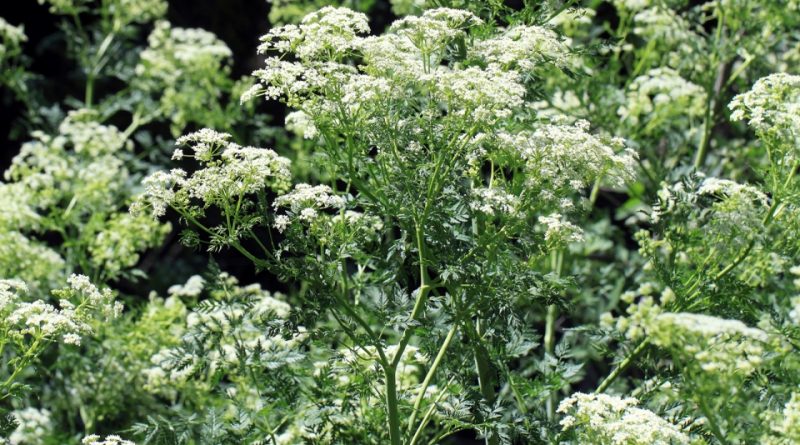 The greater hemlock (Conium maculatum L., 1753) is a two-year herbaceous species belonging to the Apiaceae family.

Systematics –
From a systematic point of view it belongs to the Eukaryota Domain, Kingdom Plantae, Magnoliophyta Division, Magnoliopsida Class, Subclass Rosidae, Apiales Order, Apiaceae Family and therefore to the Genus Conium and to the Specie C. maculatum.

Etymology –
The term Conium comes from the Greek κώνειον kṓneion, cicuta (in Hippocrates), probably derived from κωνάω conáo, around, rotate, with reference to vertigo due to the ingestion of the hemlock. The specific epithet maculatum derives from macula, stain: spotted, spotted, mottled.

Geographic Distribution and Habitat –
The greater hemlock is a plant, native to Europe, which can be found up to 1500 meters above sea level, in the area between the olive and the upper chestnut, is present in Italy in all regions and particularly common in the plains of Eastern Emilia. Its habitat is rubble, hedges, farmland, vegetable gardens and meadows. It is a Eurasian species in the broad sense, present in almost all areas of the world. 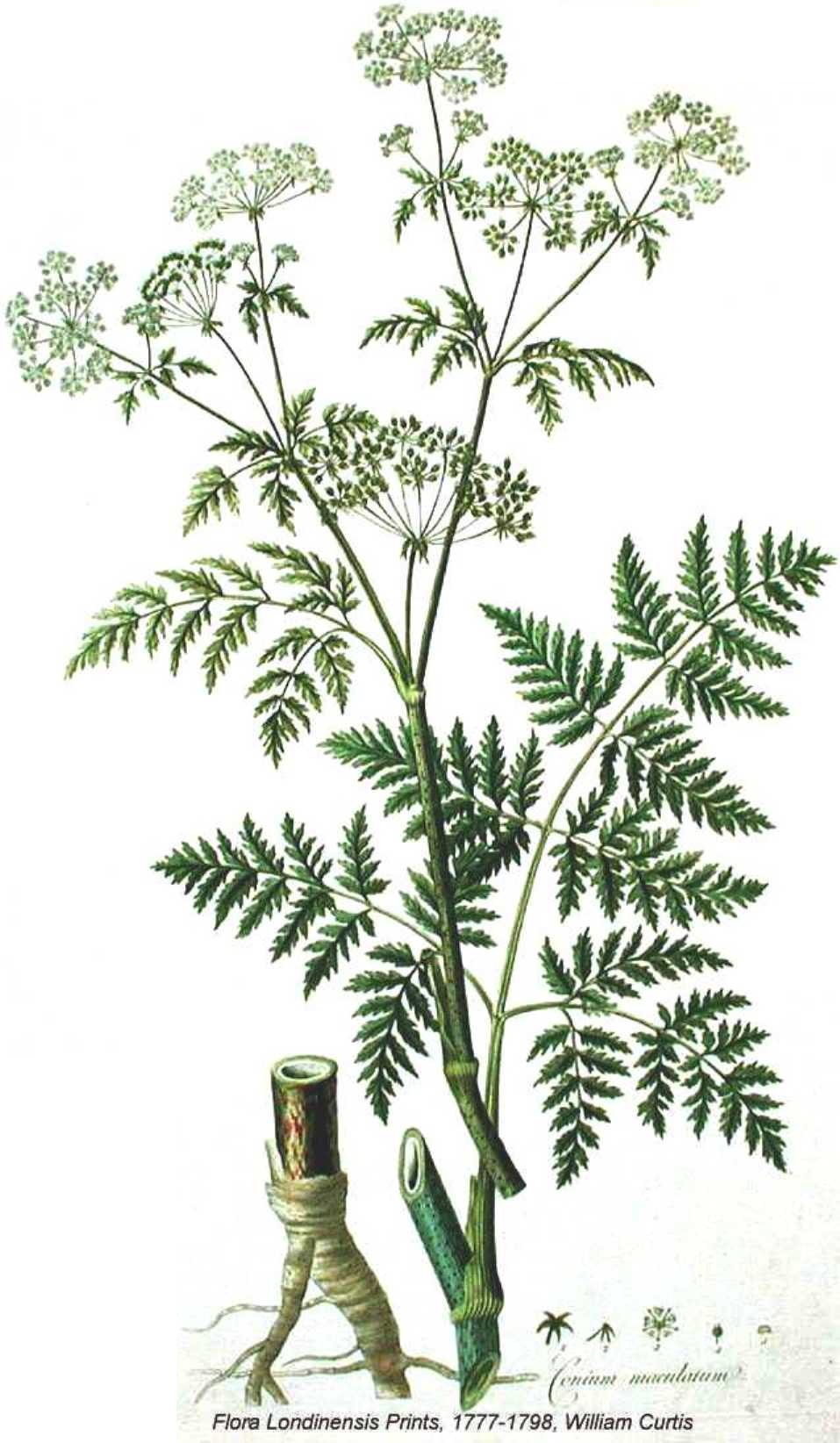 Description –
Conium maculatum is an herbaceous species characterized by a fetid smell with whitish roots and striated horizontally, biennial cycle with gems placed at ground level. The stem is erect, tall from 50 to 200 cm, streaked, fistulous, pruinose, hollow and with numerous branches in the upper part, often mottled and reddened in the lower part. The upper leaves are hairless, 3 – 4 pennatosette with the last pennatifide incisions, short petiole, the light green color; basal leaves provided with wide sheaking petioles, presence of red-violet patches, lamina 2-3 x 1-2 dm. It has inflorescences, with hermaphroditic flowers, with male and female sexual organs, with umbels with (6) 8 – 20 rays, scabri, subequal, coming out of a casing with more bracts (0) 5 -6 of triangular shape and a small involucre 3 bratteole connected to the base, unilateral, of lanceolate shape, bordered in whitish color; sublime flap calyx with heart-shaped white petals – inverted. The stylus is patent and curved at maturity. The fruits are diachens composed of 2 – 3 mm seeds, ovate and flattened and irregularly furrowed with prominent ribs. The antesis is between the months of May and September.

Cultivation –
The cultivation of the major hemlock is rather simple. It is a species that needs a fresh soil and a mild climate, where the areas of shade prevail over those of direct sun. However, the hemlock cultures are not very widespread, if there are any, as it is a toxic plant whose field of use is extremely small, if not nonexistent. As far as the cultivation technique is concerned, the following sheet can be consulted.

Uses and Traditions –
The hemlock is a plant passed into history as a drink that gave death to the philosopher Socrates, who was condemned to capital punishment and drank it as an infusion. However, given the symptoms described in Plato’s Phaedo it is probable that Socrates used a mixture of poisons (hemute from Conium, opium and datura, sweetened with honey and wine). However, hemlock has often been used as a poison in history or, in very low doses given its toxicity, for analgesic and antispasmodic medicinal preparations now fallen into disuse.
According to some narratives, it seems that on the Greek island of CEO it was customary among the elderly that, in order not to burden financially on their children, they organized rich banquets using a hemlock drink which they used to carry out collective suicide.
Even Shaekespeare in his “Macbeth” mentions the plant that is used by witches to prepare potions in the dark.
This plant can be confused with parsley, chervil but more with Cicuta virosa L. which, however, presents at the base of the stem a fusiform bulb the absent bracts; moreover, with the term of hemlock, they are called both the Cicuta virosa (Lesser Cicuta) and Aethusa cynapium L. (Cicuta aglina).
Remember that the whole plant is poisonous and can lead to death due to the presence of five different alkaloids: the conine, the dihydrine, the pseudoconhydrine, the methylconicine and the conicein; of these the conjugate, which is a neurotoxin, is the most active and acts at the level of neuromuscular synapses. The leaves also contain caffeic acid, ethereal oil, carotinoid, potassium and magnesium.
The concentration of these principles varies in the various parts of the plant; this is so on average:
– green fruits: 0.73 – 0.98%;
– ripe fruit: 0.50%;
– flowers: 0.09 – 0.24%;
– leaves: 0.03 – 0.18%;
– drums: 0.01 – 0.08%;
– roots: 0.05%.
The plant as well as being able to be, with a few grams, mortal to humans is toxic even for livestock that last the grazing ignore it.
In humans, the ingestion of hemlock causes digestive problems, headaches and later paresthesia, decreased muscle strength, and finally an ascending paralysis.
Fortunately, even if it can be exchanged with parsley or chervil, its bad smell and the sense of immediate burning, which is felt on the tongue immediately at the beginning of chewing, make it immediately determine the danger.
The birds, on the other hand, are generally immune to them. The poison also acts indirectly, that is, it leads to poisoning even after the ingestion of an animal that had previously eaten it.
For the pharmaceutical purposes of this plant, the leaves are used, which are harvested at the beginning of flowering and dried in the shade away from moisture. The seeds are harvested in early autumn and stored in boxes in the dark.

Preparation Mode –
The used parts of the Conium maculatum are the leaves and the fruits. It is used in the form of cataplasm, poultices and ointments such as: antispasmodic, sedative of neuralgia, soothing of sexual desire and for some of its components as anticancerogena of the breast. Because of its high toxicity and poisonousness, the home-made preparations of this plant are absolutely unadvisable.