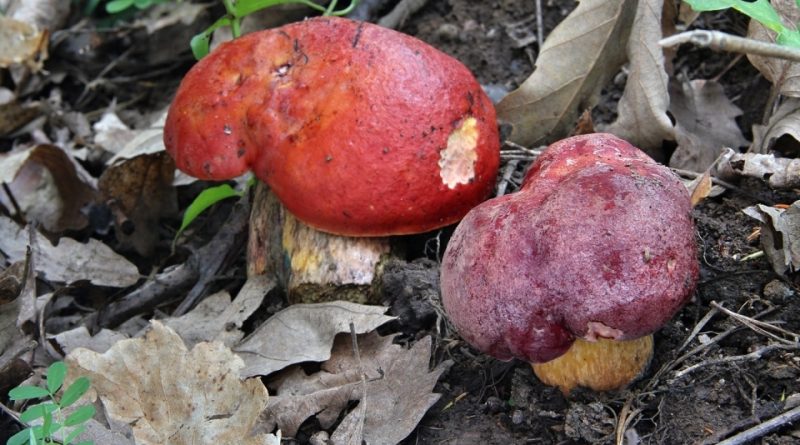 Systematics –
From the systematic point of view it belongs to the Domain Eukaryota, Kingdom Fungi, Basidiomycota Division, Class Basidiomycetes, Order Boletales, Family Boletaceae and then to the genus Boletus and to the species B. dupainii.
The terms are synonymous: Rubroboletus dupainii (Boud.) Kuan Zhao & Zhu L. Yang 2014 and Tubiporus dupainii (Boud.) Maire, Publ. Inst. Bot. Barcelona 3 (4): 46 (1937).

Etymology –
The term Boletus is of controversial etymology: according to some it derives from the Greek βωλήτης bolétes, with which the Greeks called a kind of mushroom (from βωλος bólos with the meaning of gleba, clod, bush, because growing among the clods or bushy places); others instead believe that the meaning of βωλος is to be extended to the ball, since the hat of most mushrooms is globose; for other authors it still derives from Bolites name with which the Romans indicated the best edible mushrooms, even if originally referred to only the ova (Amanita cesarea), but soon used to call also porcini. The specific dupainii epithet was dedicated in honor of Victor Dupain (1857-1940), a French mycologist.

Geographic Distribution and Habitat –
The Boletus dupainii is a fungus that grows gregarious in small groups in the woods of Quercia, Castagno, sharing, frequently, the same habitat of the Amanita caesarea (Scop .: Fr.) Pers .. you can find it on calcareous soils, in broad-leaved woods. However, it is a fairly rare species that bears fruit from August to October, especially in broad-leaved woods, under beech. 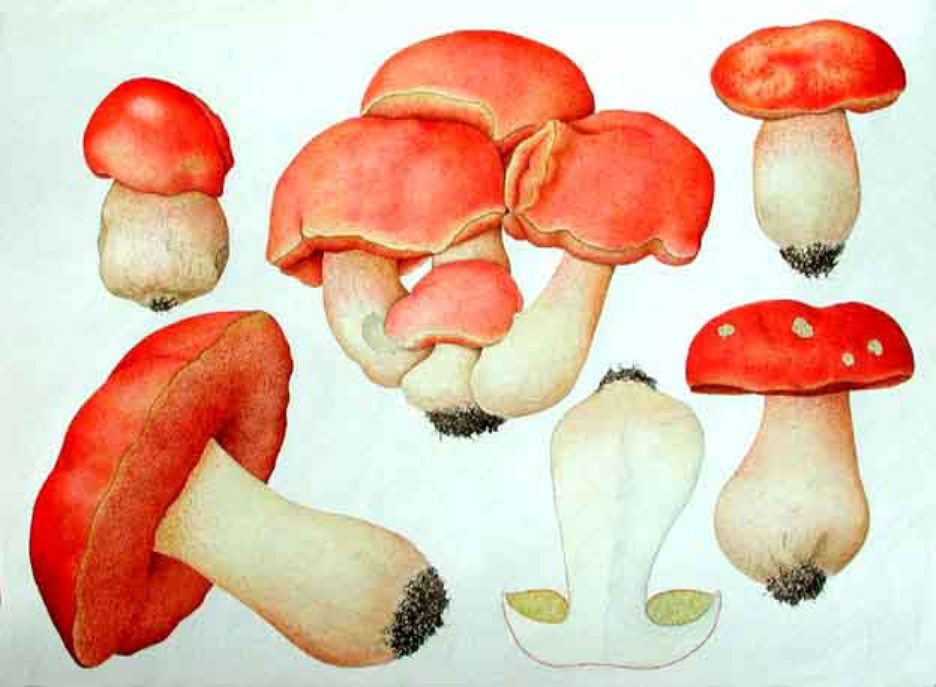 Recognition –
The Boletus dupainii is a fungus that is determined at first sight by the color of bright red hat, cherry red, which detaches and contrasts sharply with the dull color of the litter of the autumn leaves. The hat, which can have a diameter of up to 11 cm, when young is hemispheric then convex, with excess cuticle, slightly sticky in wet weather and a red carmine color, which at the touch turns to blue, with the shiny surface as if the cuticle had undergone a lacquering. The pores are orange-red in color, small, from round to slightly polygonal. They are stained with blue at the touch and with ferrous sulphate they turn to green. The tubules are yellow-green, long, adherent to the stem or sinuato-hooked. The stem is swollen at the base, with decoration consisting of pink dots, rarely present a red pattern, but only on the upper part under the insertion of the hymenium. The meat is soft in the cap and more firm in the stem, yellow under the tubules, with red underneath the cuticle; for the rest, yellow turning to blue at break, with a smell: faint, imperceptible and sweet taste. Microscopic analysis shows spores of 10-15 x 5-8 μm, yellow-green in bulk, smooth, fusiform.

Cultivation –
There are no cases of cultivation or attempts to cultivate this fungus.

Uses and Traditions –
Boletus dupainii with its characteristic iridescent red color is a very rare mushroom, so it is recommended to avoid collecting it, also because it is a sort of mediocre edibility. This mushroom was identified by the French pharmacist and mycologist Jean Louis Émile Boudier, who with the epithet dupainii framed it for the first time in the genus Boletus. This binomial, except for the parenthesis of Tubiporus dupainii (Boud.) Maire, has characterized the species until the advent of phylogenetic analyzes which have shown that this fungus, together with various other red-pore species, belongs to a genus other than Boletus and was therefore segregated in the neogener Rubroboletus Kuan Zhao & Zhu L. Yang. In this regard, there are still discrepancies between the various authors on which priority name should have this species. All the recombinations in Blanco Dios Suillellus referring to taxa other than queletii and luridus are phylogenetic and therefore would be invalid. It follows that at present the correct collocation of Boletus dupainii should be in the genus Rubroboletus.

Preparation Mode –
It is an edible mushroom only after adequate cooking but it is not particularly interesting for culinary reasons because, due to its rarity, it should not be harvested.