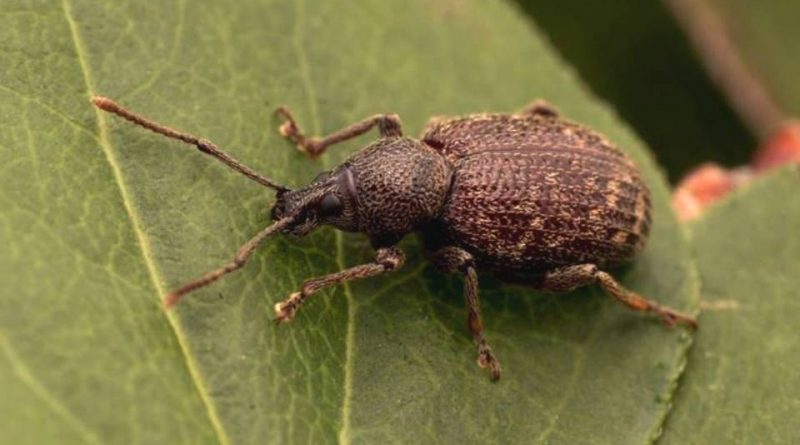 The oziorinco of the olive tree (Otiorhynchus cribricollis Gyllenhal, 1834) is an insect belonging to the order of the coleopterans and to the family of the Curculionids.

Geographic Distribution and Habitat –
The Otiorhynchus cribricollis is native to southern Europe and the Mediterranean area, it is also widespread throughout North Africa. Due to trade, it was accidentally introduced in the US, Australia and New Zealand. In Italy it is an insect present in all the areas where the olive tree is grown. It is an insect that lives mainly at the expense of the olive and citrus, but the adults have been found some times also on: vine, peach, almond and vegetables, especially if associated with the olive tree.

Morphology –
The olive oziorinco is distinguished by an adult due to its oval shape, its shiny black color and its reddish-brown feet and antennae; reaches 6-8 mm in length. The elytra are characterized by 10 deep and dotted streaks, also the back wings are missing and the elytra are welded together, so they are not able to fly. The larvae (about 7-8 mm in length) are apode, whitish-yellowish, and with a curved body, with dimensions of 8-9 mm in length. The pupa is enclosed, as for the other Curculionids, in an earthy cell. The eggs are ellipsoidal and ivory. It is a parthenogenetic species, with rare presence of males.

Attitude and biological cycle –
The Otiorhynchus cribricollis performs only one generation per year and winters in the larval state in a more or less advanced stage of development. The appearance of adults occurs at the beginning of summer and after reproduction, generally by parthenogenesis, females generally lay in the period of October, for more than a month, a number of eggs ranging from 70 to 200 on the surface of the ground or slightly underground; after about 3-4 weeks the larvae will be born that feed and develop both on the roots of herbaceous plants and of the same fruiting plants; these will reach maturity after 10 larval ages; at this point they cry in an earthy cell between April and May. At the end of this phase, after about a month, the adults leave the ground from early June. To prevent these from damaging the vegetative parts of the plants, appropriate prevention methods must be implemented for this family of curculionids.

Ecological role –
The adults of the olive’s oziorinco operate at night. During the day they take refuge in the ground a few inches deep, at the feet of the plants they feed on. During the night they climb on the plants to feed on the green and more tender parts of the leaves and bark. The erosions on the leaves are typically half-moon on the leaf margin. Instead the larvae damage the roots of horticultural or herbaceous plants. In the case of massive infestations, to be able to feed, the adults begin to erode also tender shoots and the peduncles of the olives provoking the cascola. The damage done by adult insects can be very serious especially in nurseries, with irreparable damage in the jets of grafts, in new plants and on suckers raised for the production of olive seedlings.
Citrus seedlings can also be affected; in this case the adults of the oziorinco make erosions just below the collar area compromising in this way the vegetation of the young seedlings.