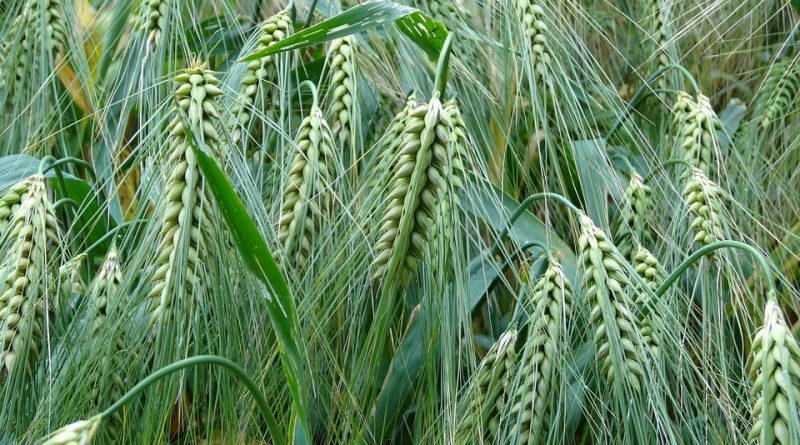 The common barley (Hordeum vulgare L., 1753) was one of the first crops to be cultivated and belongs to the Poaceae family.

Etymology –
The term Hordeum derives from the classical Latin name of the barley (in Pliny, Virgilio, Columella etc.), in assonance to the Latin fórdeum (in Quintilian) and to the Greek φορβή phorbé fodder; according to some, it derives from horreo, that is to say, to be bristling: in reference to the long rests; according to the Quattrocchi comes from horreum: granary. The specific epithet derives from vúlgus volgo: very common, banal, ordinary: for the great diffusion.

Geographic Distribution and Habitat –
The Hordeum vulgare originates from ancestral forms identified in the Near East and more precisely in the area between Israel, Jordan, Syria and the southern part of Anatolia. According to other authors the wild form of this species would originate in Tibet, so much so that in Ethiopia and in Tibet there are many spontaneous species. On the other hand, the forms of Hordeum, with naked kernels, appear to originate from China. 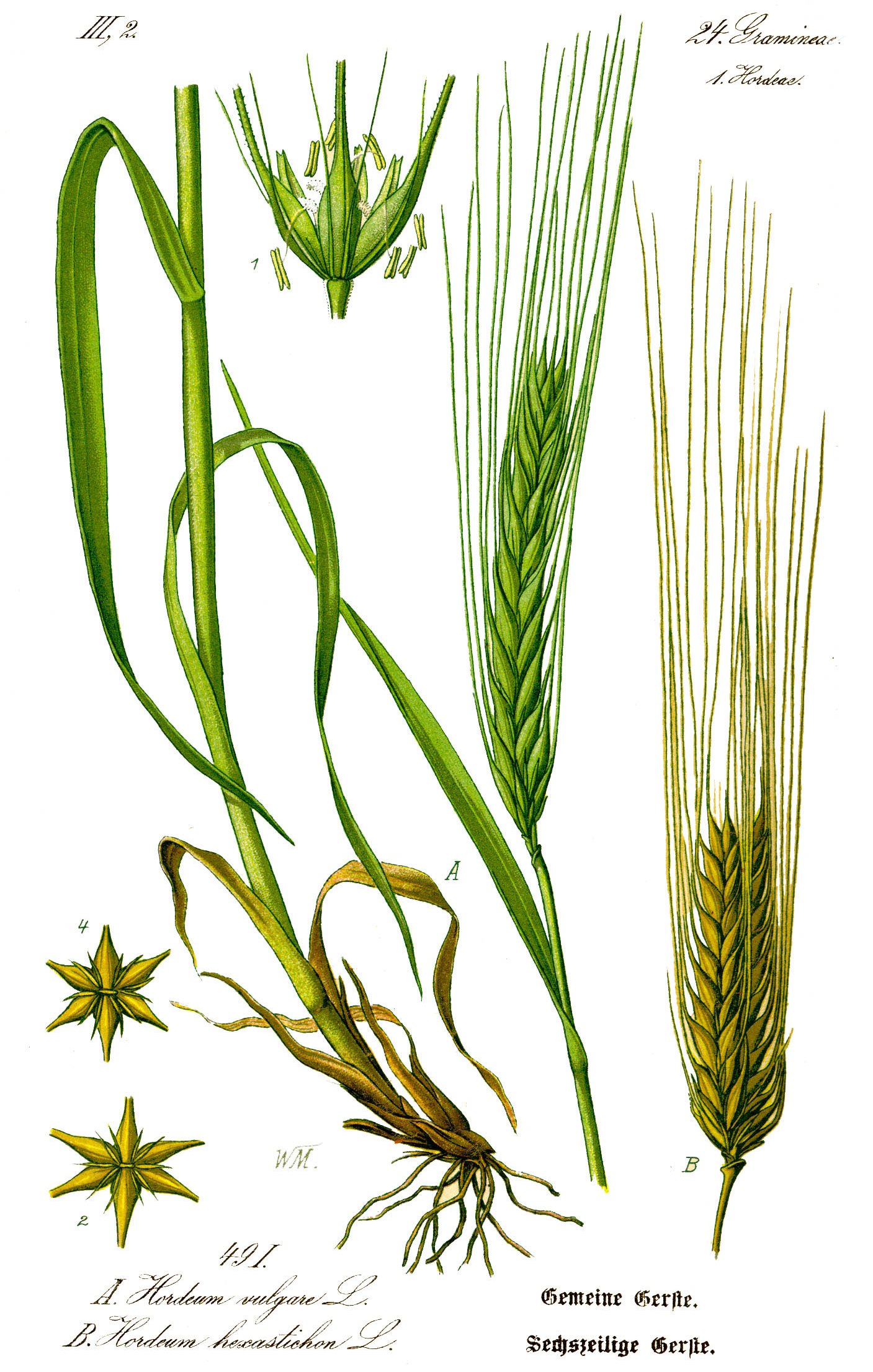 Description –
The Hordeum vulgare is characterized by an inflorescence (spike) whose rachis consists of 20-30 articles on each of which, alternately, are brought three spikelets uniflore, one median and two lateral. In the case where the central spikelet of each node of the rachis is fertile and the two lateral are sterile, the spike carries only two ranks and has a strongly flattened shape: in this case we speak of distal bears (Hordeum vulgare distichon). On the other hand, if the three spikelets present on each node of the rachis are all fertile, there are the polyistic or exaggerated barriers (Hordeum vulgare exastichon), with six rows.
These, moreover, are distinguished in:
– with kernels prepared in regular radial pattern: exotic bears (H. vulgare exastichon aequale);
– with lateral kernels very spread out and almost superimposed on those above and below so as to appear 4 rows and quadrangular in section: improperly called tetrastic bars (H. vulgare exastichon inaequale).
The leaves have glabrous and highly developed auricles, so as to embrace the stem until they overlap each other. The glumes, present in three pairs on each node of the rachis, are small and lesiniform. The glumelle are very developed and adhere strictly to the caryopsis (dressed); there are also naked shapes, even if they are not widespread and are used as a substitute for coffee. The inferior glumellas almost always end with a very long and robust remains. In some barley cultivars at maturity, the spikes have a pendulous bearing while others are erect. Like wheat, barley is self-possessed.

Cultivation –
Barley is the most economically important species among those grown in the Hordeum genus; that from which food barley is obtained and on which a considerable part of the world food depends.

Uses and Traditions –
The Hordeum vulgare is very likely the first cereal cultivated by man. There is evidence of Neolithic cultivation finds dating back to 10.500 BC. Certainly some poles were cultivated in Mesopotamia in 7,000 BC. while subsequently, in 5000 BC, barley had spread to Central Europe and Egypt, where as early as 3000 BC. the transformation into beer took place. Its diffusion was rather rapid and already around 1000 a.C. he had reached far Korea. The barley was until the fifteenth century among the most common cereals for breadmaking.
Barley is a very rich food with healing properties: it is remineralizing of the bones (as it is also rich in phosphorus), prevents pulmonary and cardiovascular diseases, is nutritious and tonic, and is very suitable in cases of gastritis, colitis and cystitis. Facilitates concentration and brain activity as it contains magnesium, phosphorus, potassium, vitamin PP, E, calcium and iron. The active ingredients are: ordenin, ordein, maltose and dextrin. It also has remarkable anti-inflammatory and emollient properties, facilitating the immune system thanks to its ability to combat inflammation. The ordinenina, especially contained in barley malt (germinated barley seeds), stimulates the peripheral circulation by having a bronchiolytic effect thanks to vasoconstriction. The ordinenina also exerts an antiseptic action on the intestine. Barley also has laxative properties.

Preparation Mode –
The methods of preparation and use of barley are varied and innumerable, also linked to local traditions. Most likely also because it is very easy to digest and is highly energetic, so much so that in the past it was used in all hospitals. In addition to food uses, remember that the decoction is used in the form of gargling helps in cases of angina and inflammation of the oral cavity. The decoction is also used for compresses on reddened eyes.