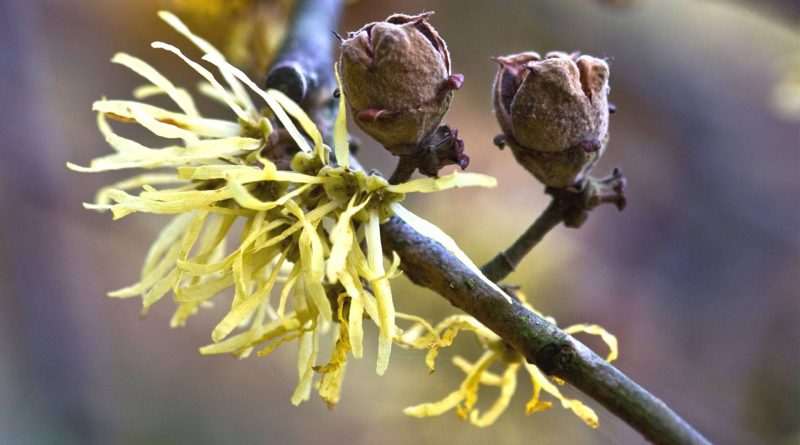 Witch Hazel (Hamamelis virginiana L., 1753) belongs to the family of the Hamamelidaceae, and comes from the eastern regions of the United States and Canada.

Systematics –
From a systematic point of view, the Witch Hazel belongs to the Eukaryota Domain, Kingdom Plantae, Magnoliophyta Division, Magnoliopsida Class, Hamamelidales Order, Hamamelidaceae Family and therefore to the Hamamelis Genus and to the H. virginiana Species.

Etymology –
The term of the genus comes from the Greek, hamamēlís -ídos; comp. of háma ‘together’ and mêlon ‘melo’; that is ‘that blooms at the same time as the apple’. The specific epithet most likely for the origin of its geographical origins.

Geographic Distribution and Habitat –
The Hamamelis virginiana is a plant native to the eastern regions of the United States and Canada, from where it was subsequently imported and today widely cultivated in various parts of the world and also in Europe. 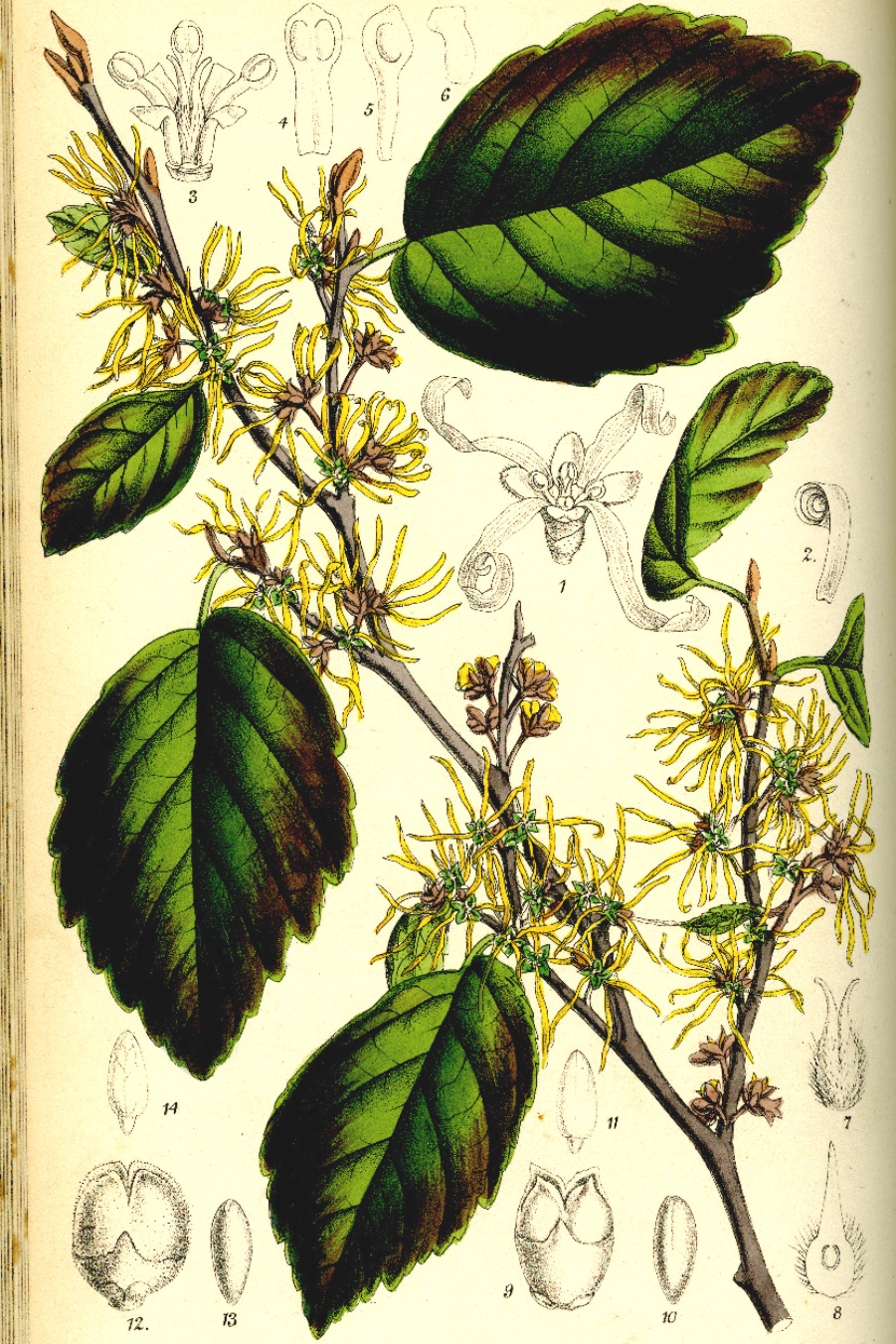 Description –
The Hamamelis virginiana is a shrub species but can also reach a height of 6 m. it is provided with leaves, caducous of brownish or yellowish green color in the autumn season; these are oval or obovate, alternate, glabrous, up to 15 cm long and up to 10 cm broad, with a short and sturdy petiole; they have an irregularly notched margin and the tip is shortly sharp and obtuse. Flowering occurs between September and October, and the flowers are joined by two or three in axillary glomeruli; they have four sepals and four yellow petals; each flower has four stamens and two styles. From these two woody capsules are formed with two loggias, about 10-14 mm long, which when ripe open up by releasing one or two dark and shiny seeds.

Cultivation –
The Hamamelis virginiana is a plant, which due to its therapeutic properties can also be cultivated in Europe.

Uses and Traditions –
The properties of the Hamamelis virginiana have been known for thousands of years. The healing characteristics of the Hamamelis decoction were already known to the Native Americans, who used it to treat wounds. Later, in the nineteenth century, the distillate obtained from the leaves of Witch Hazel, was used by European settlers against sunburn and eye irritation after long exposure to light. Its uses are mainly due to the presence in the leaves and in the tannin bark; it is widely used in herbal medicine for the preparation of fluid extracts and ointments with decongestant, astringent and haemostatic properties; the extracts are used in the treatment of hemorrhoids, varices, phlebitis and ocular inflammations. In cosmetics the extracts of Hamamelis virginiana are used for emollient lotions for dry skin.

Preparation Mode –
Of the witch hazel you can prepare infusions and extracts like mother tincture, otherwise for external use the choice is much wider. You can prepare eye drops, soothing afters and decongestant tonics. With witch hazel we also make creams against cellulite and also distilled water of Hamamelis, useful for inflammation of the mouth and gums, for red eyes and in case of allergic conjunctivitis. Among the preparations of the witch hazel we remember the cream used as a skin softener.