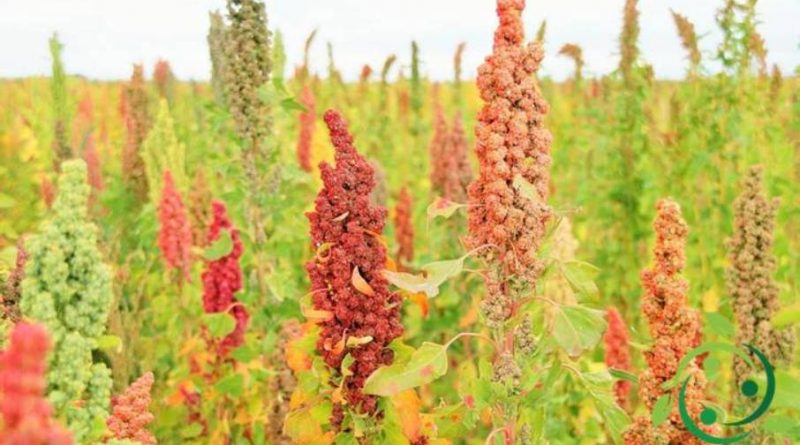 How to grow Quinoa

Quinoa (Chenopodium quinoa Willd.) is an annual herbaceous plant cultivated as a grain crop primarily for its edible seeds. Quinoa is related to spinach and amaranth. In this sheet we see how to grow quinoa. From its seeds, subjected to grinding, is obtained a flour containing mainly starch, which allows this plant to be classified merchandise fully as a cereal despite not belonging to the botanical family of graminaceous or poach. Unlike cereals, however, it has a high protein content and a total absence of gluten. Because of its good protein content it is the staple food for the Andean populations. The Inca call quinoa “chisiya mama” which in Quechua means “mother of all seeds”.

The inflorescence of Quinoa is a typical panicle with a central axis, a secondary and a tertiary with the pedicels that hold the glomeruli. The panicle (depending on the variety) can have a length ranging from 30 to 80 cm in length and from 5 to 30 cm in diameter.
For the cultivation of Quinoa it must be taken into account that it is a plant that can be grown both in desert areas and in wet and rainy areas through cold climates. However the temperature suitable for quinoa is between 15 and 20 ° C.
Quinoa prefers loamy soils, well drained and rich in organic matter and with different pH conditions; it adapts, if there are no stagnations even in heavier soils on condition that these are fertile (it is demanding in nitrogen and calcium, moderately demanding of phosphorus and potassium). Quinoa is very efficient and can give fair yields with only 200-250 mm of rain per year.
To sow quinoa, wait until the temperature is between 7 ° and 10 ° C up to a maximum of 18-20 ° C (between April and May) and a good humidity to facilitate seed germination. Before sowing it is advisable to vernalize the seeds by placing them in the refrigerator.
For the Italian climatic conditions it is necessary to know that the cultivation of the quinoa shows the following limits: with temperatures above 32-34 degrees (even for short periods) it is possible to have pollen sterility in most crops, moreover the greater rainfall and the high atmospheric humidity can cause germination of mature seeds still on the plant.
The harvest of quinoa usually begins with the fall of the leaves, when the seed is hardly incidible with the nail. The best way to determine if the seed is ready for harvesting is to gently but vigorously shake the plant or by rubbing the panicle in your hands to see if the seeds fall off easily.
The collection period is generally between August and September in the northern hemisphere. The collection of quinoa can be done, as well as manually (for small crops) even through complete mechanization through threshing, drying and sorting and finally packaging and storage. Quinoa can be consumed after a desaponification operation.
Among the adversities, it should be noted that quinoa is subject to Aphis fabae (black bean aphid, especially during the vegetative phase) and to Nezara viridula (green bug) and other cymicides in the maturation phase of the seed.