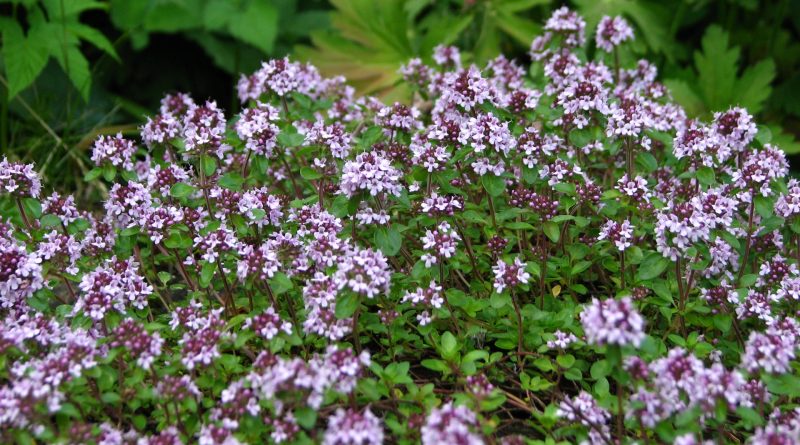 The serpillo (Thymus serpyllum L.), also known as pepolino, pipernia or wild thyme is a plant belonging to the Lamiaceae family. It is a common species all over Europe and North Africa, it is certainly one of the most popular thyme species, used from the night of the times for culinary, ornamental and medicinal purposes.

Systematic –
From a systematic point of view, Thymus serpyllum belongs to the Eukaryota Domain, the Kingdom Plantae, the Magnoliophyta Division, the Magnoliopsida Class, the Lamiales Order, the Lamiaceae Family, and then the Thymus Genus and Species T. serpyllum.

Etymology –
The name of the genus (Thymus) comes from ancient Greek whose meaning is strength, courage, qualities that would be generated in those who smell the balsamic perfume. It was first used by Teofrasto (371 BC – Athens, 287 BC) an ancient Greek philosopher and botanist, Aristotle’s disciple, author of two extensive botanical treats, for a scented plant used as incense in sacrifices. According to others etymology is derived from a Greek word for “perfume”. The specific name serpyllum, is derived from the Latin serpo = slit, because of its characteristics to grow horizontally on the ground.
It is also called Timo cedrato, Wild semolina, Serpollo, Grass salterella and Sarapullo.

Geographic Distribution and Habitat –
Thymus serpyllum is a very common species in Europe, even in the north (we find it even in Iceland), as in the whole Mediterranean and Asia. It grows in well drained, sandy soils, on sunny slopes, in the bush and up to 2600 meters above sea level.
In general, it grows along the sunny bays, on the slopes, along the arid margins of the woods and often over the small horns in the meadows. As it requires very warmth and sunshine, it is maintained on stony floors and alpine pastures where the warmth of the soil is reflected in a particular way. 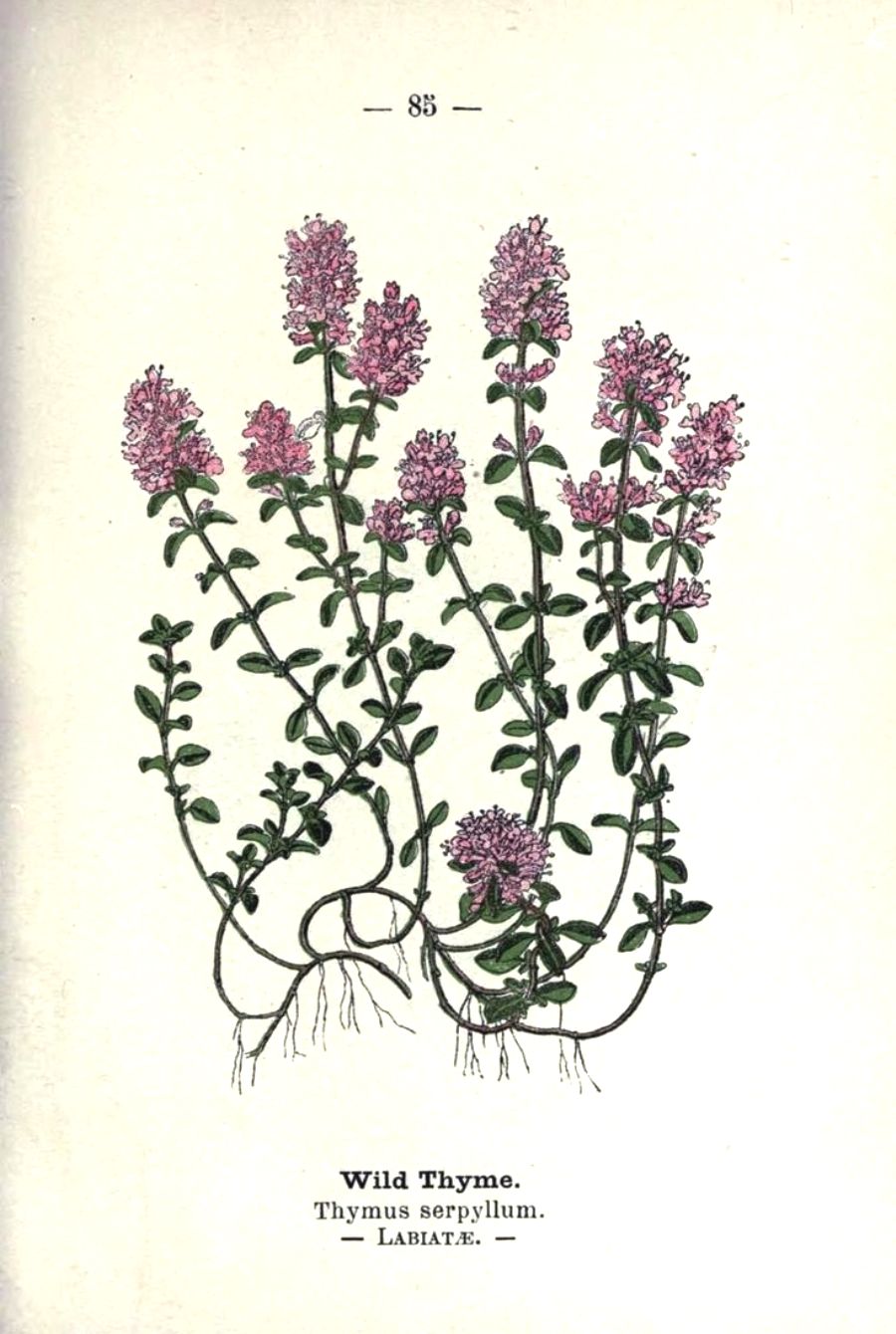 Description –
The serpillo is a highly variable creeping herbaceous plant, 10 to 30 cm high. It has sloping or rising crevices, thin, rooted, ramicy. The leaves are small from linear to elliptical, flat toe, flat. The flowers are small, bilabian corolla, in short apical shorts. Color varies from white to pink to violet. The flowering of Thymus serpyllum lasts for about a month, in a variable period between April and September. At noon, when the sun is high, the purple flower bearings emanate
A scent that calls insects and bees.

Cultivation –
Thymus serpyllum reproduces by seed but multiplies more frequently for propagating in summer, or by cuttings in spring or autumn. Its cultivation is fairly easy and can be done especially in well-drained soils; On compact soil, having a radical root system, likes regular watering.
Cultivation techniques are similar to the other thyme species referred to in this site, with the exception of harvesting that is more complex as it is a creeping species and still lying more on the ground, it is necessary to adapt the harvesting systems to this problem .

Uses and Traditions –
Thymus serpyllum is a good mellifera plant and is visited by bees that allow you to obtain a certain amount of honey. Its introduction into farms therefore also guarantees the implementation of the attachment of other plants using entomophilous pollination.
The serpillo is a nice companion of small gardens, for its robustness, perfume and flowering. There are some dwarf varieties that can be used as turf and we recommend mli where the lawn is not advisable for water shortage.
Thymus serpyllum, like other thyme species, is a plant whose uses are lost in the night of time and whose historical and description documents begin practically with civilization
It is very used in cooking, like many other thyme species. In particular, due to its antibacterial properties, it is very helpful in helping digestion and reducing intestinal fermentation, for example, by accompanying a plate of beans.
At Ischia it is used to produce the pipernelle, a characteristic liqueur obtained by infusing the pipernia in the alcohol.
In the Valdaso, in the area of ​​Monte Rinaldo, a particular type of Pecorino cheese is produced using rennet flavored by various herbs including the Thyme Serpillo.
The serpillo is used in phytotherapy, like other thyme species. The serpillo differs from the common thyme by the proportion of the active principles contained, which however, within the same species, varies considerably.
Among the active ingredients we remember: timol, carvacrol, chinol, tannins, saponin, resins and flavons.
In the eleventh century the Thy came to us coming from the Mediterranean countries and the cultivated species and then again.

Preparation Method –
The Serpillo must be harvested during its flowering; The most effective is the one picked up in the midday sun. The flowers can be macerated in the oil in a bottle filled up to the neck or can be prepared a syrup. Timo’s oil is applied against paralysis, apoplectic stroke, multiple sclerosis, muscular atrophy, rheumatism and distortion.
Against stomach or menstrual cramps and abdominal spasms Thymus is recommended both internally and externally. Drink two cups a day. Externally, against spasms, apply a flower pad and stems dried and harvested in the midday sun. Before bed, this pad is heated in a pot and applied to the stomach or abdomen.
Herbal pads are also recommended against cancers and bruises.
Thyme combined with Plants is a proven remedy against respiratory diseases. Against severe catarrhs ​​and bronchial asthma, and even against cough, use a herbal tea of ​​Thyme and Piantaggine, mixed in equal parts, adding lemon and candied sugar. It is prepared freshly, four or five times a day; If there is a risk of pneumonia, this herbal tea, eaten every hour, will not fail to act.
Serpillo is an excellent remedy against alcoholism.
One liter of boiling water pours on a handful of Thyme; Covers the pot and leaves it for two minutes. Pour the herbal tea into a thermos and administer it to the alcoholic spoon every quarter of an hour. You will experience nausea, vomiting, severe diarrhea and abundant diuresis, sweating and at the same time strong appetite and thirst. In the event of relapse, inevitable at first but with the passing of time less and less frequent, the care is repeated.
Thyme or Serpillo is also suggested against epilepsy. Two cups of herbal tea are consumed per day, not during the attacks but throughout the year as a two to three-week period of care for 10 days.
Timo’s syrup is wonderful and very healthy. Against colds should be given before meals.
Let’s see some preparations:
Tea – Boil one liter of water with a dessert spoon filled with herbs; Let it rest briefly.
Additive to bath – For a full bath 200 g of herbs.
Timo’s Tinture – Fill a bottle with the flowers picked up in the midday sun until it reaches its neck, pour it over the watercress at 38 ° – 40 ° and leave it in the sun for fifteen days.
Timo’s oil – Fill a bottle with the flowers picked up in the midday sun without pouring them and pour over the squeezed cold (virgin) oil until the flower level exceeds 2 cm. Allow to rest for 15 days in the sun or in the vicinity of a heat source.
Syrup – With wet hands fill a glass jar of flowers and stems grown under the sun. Blend them strongly with layers of raw sugar. Leave it for about three weeks in a sunny place. When filtered, the flowers and stems sucked in with sugar should be washed with very little water that will be added to the syrup. Now, the syrup is evaporated while keeping the flame off the cooker and avoiding bubble. The syrup should not be too fluid or too dense, so it is allowed to cool it one or two times to test.
Liquor to the serpent “serpul” – Cut the flowery summits of the thyme and, on site, remove most of the cut grasses together and then clean it more thoroughly. Preparation time: about 10 minutes plus 40 days of infusion.
Ingredients:

Timo Serpillo some bunch;
800 gr of water
600 g of sugar
600 gr of alcohol at 90 °
Just put the seedlings, removing some of the stems, in a jar full of 95 ° alcohol and leave it for about 40 days shaking it daily. After this time filter the alcohol and squeeze through a gauze the seedlings. Prepare a syrup of water and sugar (800 grams and 600 grams of sugar), boil for a few minutes, cool down perfectly, and combine the previously filtered alcohol. Bottle in a bottle with cap that closes well and let it pass at least 3 months, better than before, before enjoying it.