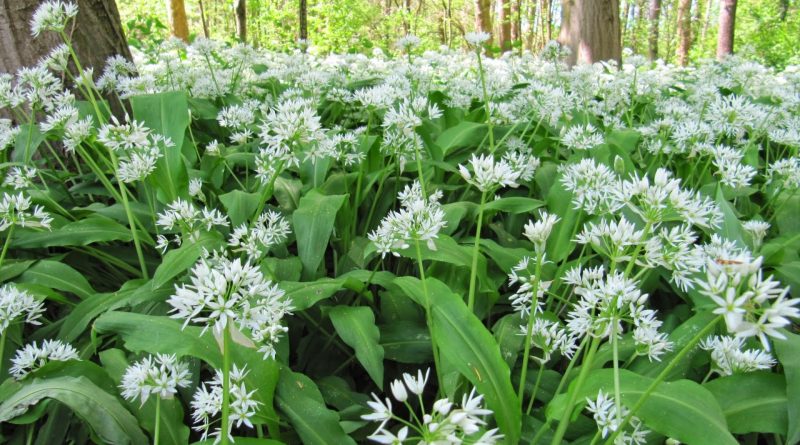 Allium ursinum L. is a bulbous, herbaceous, perennial, not very tall erect plant with white flowers and broad leaves, delicate and silky, with a pungent smell like garlic. It belongs to the Liliaceae family. It can be found in our forests sometimes in massive and thick populations. The name with which it is commonly known are: garlic, wild garlic, garlic from leafy leaves, garlic from large leaves.

Systematic –
From a systematic point of view, mandarin garlic belongs to the Eukaryota Domain, the Kingdom Plantae, the Spermatophyta Superdivision, the Magnoliophyta Division, the Liliopsida Class, the Liliales Order, the Liliaceae Family, and then the Genus Allium and the Species A. ursinum.

Etymology –
The Allium denomination (the genus) is not easily reconstructed since the use and cultivation dates back to at least 3,000 years BC. The term was already in use with the Roman populations. It is thought that the origin is Celtic, from their word “all” for hot, acre as the garlic is just tasted. Even the Greeks knew this “burning” plant because of its strong smell and “allis” probably referred to the spine that covered the inflorescence. The name of the ursinum species comes almost certainly from the bears that at the end of the lethargic drink with this plant to purify the body after long winter sleep. In more recent times, even before Linneo, this genus was already cataloged among the Monocotyledons with about 250 species including Allium ursinum. In Italy there are about thirty different species of the Allium genus, most commonly associated with the pungent odor that comes from a volatile essential oil rich in sulphides.

Geographic Distribution and Habitat –
Garlic is a plant originally from Asia, but has spread all over the world.
This species is distributed mainly in Europe and North Asia. It is located all over Italy, from the floor to 1500 m s.l.m.
The typical habitat of Allium ursinum is damp forests of hardwoods and not in full sunlight, or along the shaded streams. Garlic is therefore a plant of undergrowth that prefers the freshness and shade and can reach 20 to 50 cm in height. The flowers are white in color, star shaped. When rubbing the leaves, the plant emits a distinctive strong smell of garlic. It can form large colonies along the streams. Normally, this slim but resistant plant grows in places where there is considerable humidity, so it favors environments near streams, water pits, rivers and lakes such as forests, meadows, forests, and ponds. 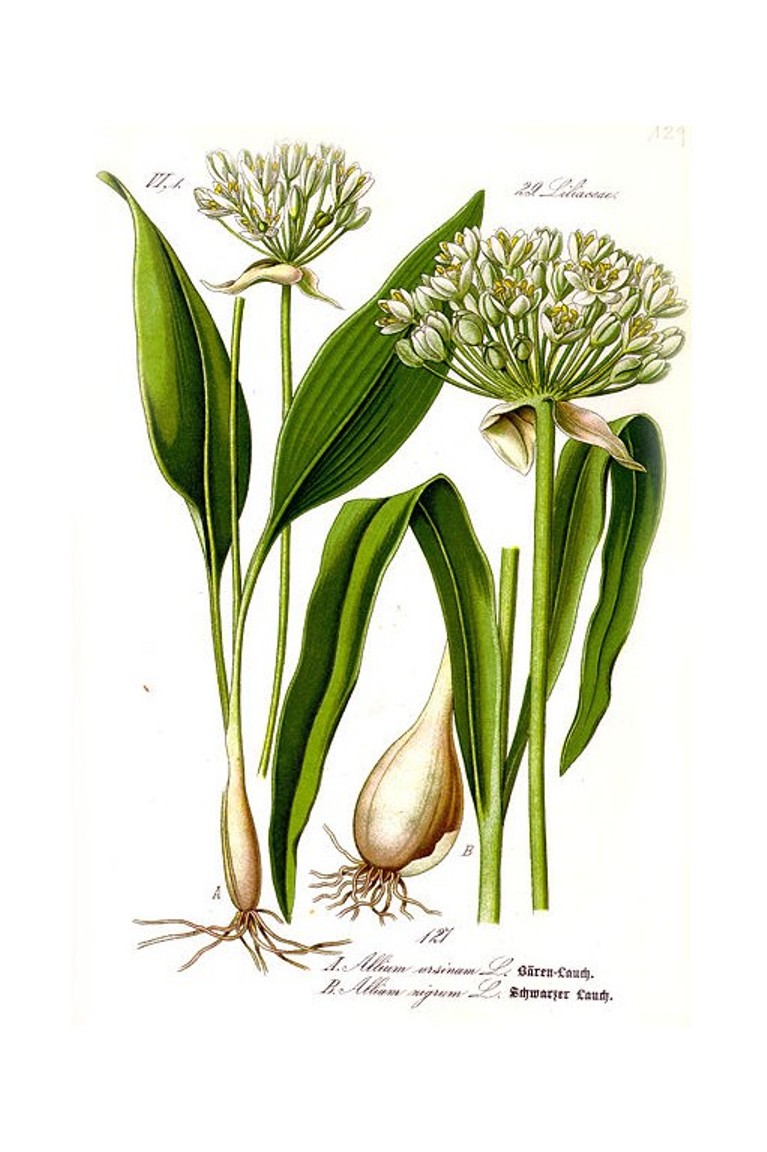 Description –
Garlic is a perennial herb plant; Has an elongated bulb covered with gray-white tunics. Leaves, long up to 20 cm, are ovate-elliptical and narrow in a long winged petiole. The flowering, erect and triangular flower is long up to 40 cm. The flowers, white and star-shaped, are gathered in curly umbrellas to separate the flowers.
The leaves appear between April and June, and the harvest period ends when the first flowers blossom. Before its flowering, its appearance is similar to that of the autumn colchico or the lily with which it is possible to confuse it, although the garlic is characterized by its characteristic odor.

Cultivation –
Allium ursinum grows spontaneously, as has been said, even along watercourses and in areas where the soil is particularly calcareous. For those who want to grow it, the garlic can be multiplied by bulb and bush division, or by sowing, however, in containers of adequate size and not too large. Once they have been born, seedlings are to be planted in larger jars until they are planted. This should be done with care, checking that the plants of the bush are not in areas too exposed to the sun and the hot summer heat, which could dry the leaves.
Watering must be fairly regular and without stagnation, if the plant has been placed in a pot. As for the full land, apart from drowning and dry periods, rains are enough.
New plants can be obtained, as seen, also for sowing in soft soil and well drained. The seedlings must then be transplanted into single jars on a rich substrate. When they are well-developed they settle in full land, preferring fresh and shaded areas.
The flowering of Garlic Orsino usually occurs in the spring months of April and May, although, given the ongoing climate change, it is possible to find several specimens in March; The type of soil that prefers for its development and which is congenial for good growth is that of calcareous soil, ie with over 20% calcium carbonate. You can consult the specific cultivation technique here.

Methods of Preparation –
For those who want to try not only in harvesting, but also in the use of garlic in the garlic, know that leaves are often used as an alternative to basil in a kind of pesto to Genoese. Just add cheese, pine nuts or nuts and extra virgin olive oil, finishing it all in a mortar or a more modern blender. Look after the leaves, after washing them, wipe them well with kitchen paper, so that they do not become black. Normally the leaves are picked in spring and used fresh. It is also possible to freeze them after they have been crushed and placed in closed bags.
Young leaves are used to give flavor to fish dishes, salads, tender cheeses and boiled potatoes. Flowers can also be edible.
Ultimately, Garlic Orsino can be used in different ways, although its use is usually limited to the culinary environment and skin beauty: the bulb can be used, after being chopped, to season sauces, pasta, Soups, green potatoes, minestrons, omelettes, fish and cous cous, giving these dishes a different flavor and flavor than they would with the use of common garlic.