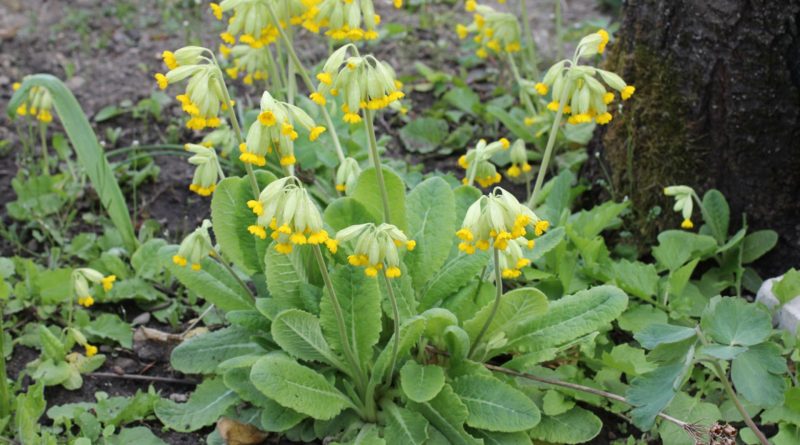 The odorous Primula (Primula Veris scientific name, L., 1753) is a herbaceous plant that grows wild in fields and forests belonging to the Primulaceae family.

Systematic –
The Primula Veris belongs to the Domain Eukaryota, the Kingdom Plantae, Division Magnoliophyta, class Magnoliopsida, Subclass Dilleniidae, Primulales Order, Family Primulaceae and then to the genus Primula and the species P. veris.
It is synonymous with the term Primula officinalis.

Etymology –
The genus name (“Primrose”) comes from an ancient Italian phrase meaning spring flower (and before that could derive from the Latin primus). At the beginning of the Renaissance this term designated indifferently any flower to bloom just finished the winter, for example, so the spring is indicated daisies (Bellis perennis – Pratolina). Later, however, the meaning is narrowed as a specific name (in speech current) in this plant which was called at the end of “the common primrose,” and as the name of the whole genre in the botanical treaties. One of the first botanists to use the name “Primula” for these flowers was P.A. Matthioli (1500 – 1577), physician and botanist of Siena, famous among other things for having done any studies on Dioscorides, and for writing one of the first modern botanical works. Name also confirmed in the seventeenth century by the French botanist Joseph Pitton de Tournefort (June 5, 1656 – December 28 1708) which normally attributes the foundation of this kind.
As for the specific term ( “veris”) etymology is very uncertain, some texts translate it more or less with real spring.
The current scientific name ( “Primula veris”) has been defined by the botanist Carl von Linné (Swedish biologist and writer, Rashult, 23 May 1707 – Uppsala, January 10, 1778) in its publication Species Plantarum of 1753.
It is known in other languages ​​with the following terms: this plant is called Gewönhnliche Frühlings-Schlüsselblume in German; in French it is called Primevère officinale or Primevère du rpintemps; in English it is called Cowslip.

Geographic Distribution and Habitat –
This species is fairly common on the Italian territory from the north and center (but is absent in the south and islands); outside Italy it is common both in Europe and in Asia. Typically preferred habitats are meadows and woods; while the substrate is calcareous (limestone but also-acidic) pH of the alkaline soil and low nutritional values ​​of the terrain that needs to be averagely humid. From the point of view altitudinal these plants can be found in the plan up to 2300 m s.l.m., then attend the following vegetation levels: hilly, mountainous and subalpine. 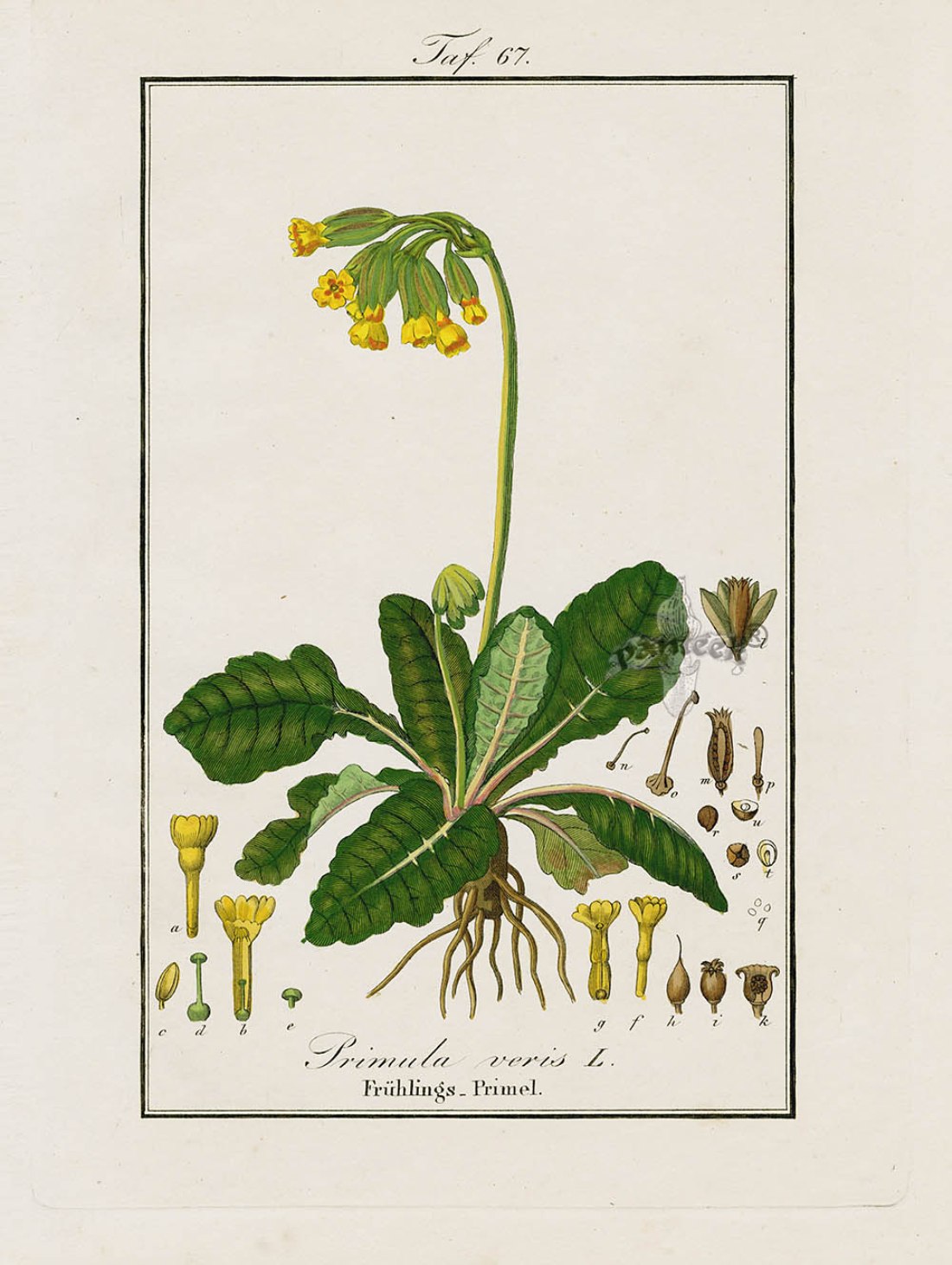 Description –
It is a herbaceous plant, perennial and rhizomatous and rather frail. Flowering is unique in the year (are plants “monocarpic” = only one fruit during the season). The height varies from 15 to 25 cm. The biological form is of the type emicriptofita rosulata (H ros), which are plants with wintering buds at ground level and protected from litter or snow, with leaves arranged to form a basal rosette.

Customs and Traditions –
The common name (Primula odorous) indicates that the flowers of this species are fragrant.
The plant contains an alcohol called “volemite”; a camphor called “primula camphor”, the glucoside “primulina” and two salicylic acid derivatives, primrose and primulaverina.
Since the latter are derived analgesic, anti-inflammatory and antireumatiche. Altre applications relate to respiratory diseases thanks to thinner and expectorant saponins present. For such uses using the root and rhizome.
In addition to the root, even flowers of primrose contain flavonoids and carotene, and are used in case of migraines and headaches, for their sedative and antispasmodic action or in case of nervousness or hyperactivity.
Today these uses are significantly overdue. There have also been cases of allergic to its pollen.
The golden-yellow flowers of this type of Primula mieloso emanate a pleasant scent, form a grappoletto on a tall stem 10 – 20 cm which rises from a rosette of leaves center.
It is found mainly on mountain meadows in the hills or in the foothills of the Alps. The widespread “Primula elatior” that grows in almost all the fields, in the margins of the woods and under shrubs, door at the top to its high stem a cluster of pale yellow flowers that smells only slightly. Its therapeutic power is equal to that of Primula Veris and can be used in the same way. A third species, the Primula auricula, is an alpine plant, is strictly protected and can not be collected.
Maria Treben shows in his work that: “Every year in the spring my mother picked primroses because he knew their power tranquilizer of the heart and nerves. It captures the whole cluster of flowers. The pastor Kneipp was a big supporter of Primula. A framework is the fact with a Primula in hand. Through his blood purifier effect it eliminates all the toxins that lead to gout and rheumatic diseases. The Kneipp pastor says, “Anyone who has the inclination to gout or rheumatism, drink for a long time every day for one to two cups of tea of ​​Primula. The severe pain will dissolve and disappear completely with the passage of time.’ ”

Preparation Mode –
In the kitchen it is used. They collect lateral leaflets so as not to impair the growth of the plant. In addition to the leaves you can also be used flowers not yet blossomed. Do not go making you collected indiscriminate; in some places the plant it is facing extinction due to excessive eradication.
The young leaves can be eating both raw and cooked. The flowers are used, sometimes, to prepare an aromatic liqueur.
A food purposes are used lateral leaflets to the rosette, which can be enjoyed alone or in combination with other vegetables in salad (with lettuce in the evening in order to facilitate sleep) or in soups.
The flowers and leaves can be used for the preparation of a pleasant infused with calming effect.
Against insomnia you can prepare herbal teas. The tea should be preferred to the use of sleeping pills. The latter, although useful at the time, in the long run affect the nervous system, while the tea heals all nervous disorders.
Another spring herbal tea that was once used as a blood purifying foresaw this recipe:
50 g of Primule;
50 g of Elderberry sprouts;
15 g of nettle leaves;
15 g of dandelion roots;
He sbollentava with a liter of water a heaped dessert of this mixture and was allowed to rest for three minutes. It advised Sorseggiarne two cups a day may sweeten with a little ‘honey.
The infusion of Primula is also an excellent tonic for the heart and nerves, relieves migraine and nervous headaches, is very effective against myocarditis, dropsy and tendency to apoplexy. A blanching of the roots, mixed with honey, herbal tea is good for the kidneys leading off urinary stones.
A fabulous remedy for heart ailments is the wine of Primula, whose preparation is easy.
Fill a large bottle of two liters with fresh flowers of Primula (the entire cluster of flowers) to the pouring neck above the natural white wine to cover up the flowers. Leave the big bottle, slightly corked, for 15 days in the sun. Whenever they have heart disease if they take a sip; heart patients they can take up to three tablespoons a day.