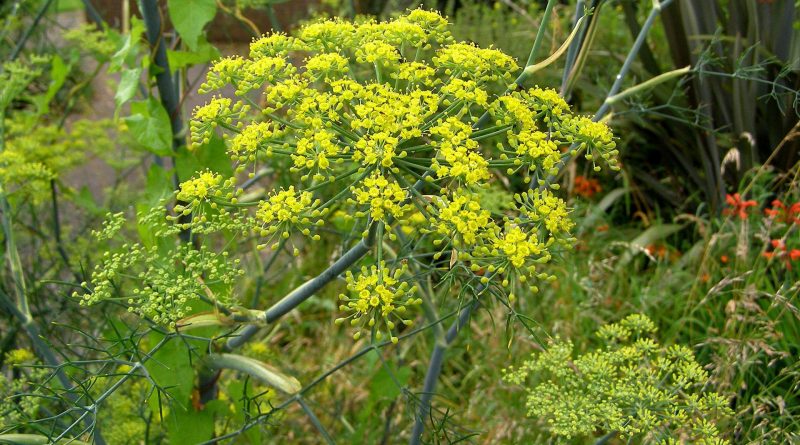 Etymology –
The first term of the binomial comes from the Latin with which the fennel was indicated; It comes from foenum = hay, for the subtlety of the leaves and for its intense aromatic odor or perhaps because it was once used as a forage. The second term means that the plant is quite widespread (vulgar = common), to distinguish it from other rare species.

Geographic Distribution and Habitat –
Wild fennel is a typical Mediterranean plant. It is most commonly found in denser populations in southern regions and islands, from baseline up to approx. 1000 m of altitude. It prefers the sunny, unspoilt, dry and pebbled places; It is also found in grassy areas, at the foot of the dry walls and on the edge of the countryside. 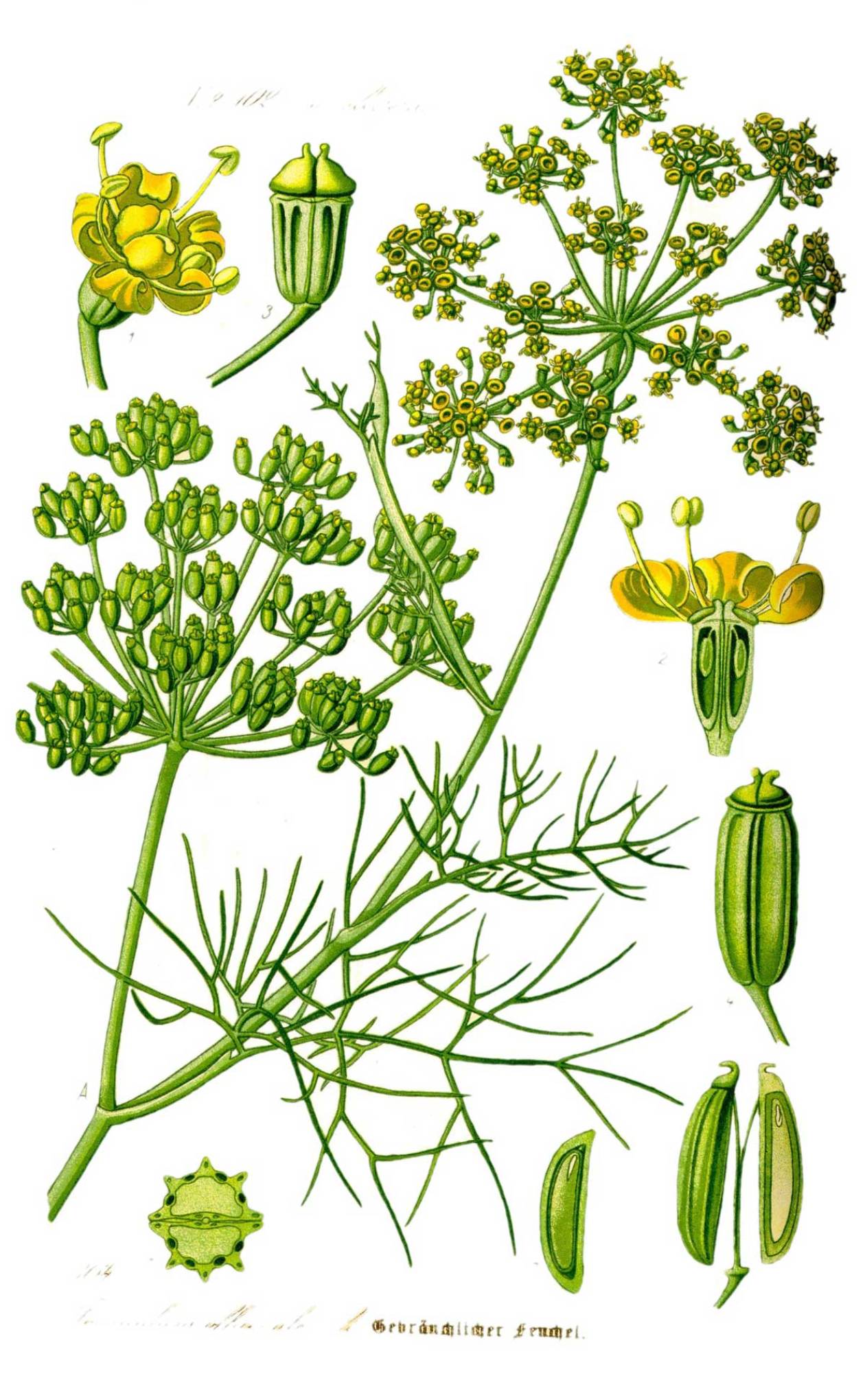 Description –
In the description we must make the distinction between the wild fennel varieties from the varieties of orticultural production (sweet).
Wild fennel is a spontaneous, perennial plant, branched, up to 2 m high. It has leaves recalling hay (hence the name foeniculum), green and produces in the summer umbrellas of small yellow flowers. Following are the fruits (achens), first greens and then greyish. Wild fennel uses sprouts, leaves, flowers and fruits (improperly called “seeds”).
Cultured (or sweet) fennel is an annual or biennial plant with rooting root. It reaches 60-80 cm in height. The large, white clumsy sheath is used to grow at the base.

Cultivation –
The fennel is widely cultivated in the gardens for the production of clump, a compact structure made up of all the foliage sheaths, which are whiteish, fleshy, closely tied to each other around a tiny conical stem, directly at the level of the ground.
Its white color is given by the technique of attachment: it is a chamfering and is carried out on a regular basis during the development of the clump or at least two weeks before the harvest.
Harvesting takes place in all seasons, according to production areas. It is suitable for any medium soil mixture with organic matter. Plants are arranged in rows and spaced about 25 cm apart. Harvesting takes place after about 90 days of sowing. It requires frequent and abundant irrigation and prefers a temperate climate of the Mediterranean type.
Harvesting the wild fennel flower occurs in Italy as soon as the flower is “open”, usually from mid-August to late September. The flower can be used fresh or can be dried outdoors, in the light but far from the direct sunlight, which would evaporate the essential oils. Diachens can be harvested at the beginning of autumn, when flower transformation took place. The “beards” or leaves and the soft shoots can be picked from spring to late autumn.
The common distinction between female fennel and male fennel is only formal: the first is elongated and the second is of round shape. The so-called male fennel, which is more appreciated in terms of the product because it is less fibrous and more fleshy, is obtained through the competition of environmental factors associated with the nature of the soil and its superficial arrangement and adequate crop technique.

Methods of Preparation –
The fruit of the Fennel, a “diachenio” often improperly called seed, is traditionally used to aromatize the brine of the olives and the water in which the chestnuts are bled; To prepare several sauces; For certain types of bread and biscuits or even chewing them to smell the breath.
The inflorescences are used for baking pork.
The leaves, but only if they are young, serve as much to decorate the dishes as well as to flavor, pleasantly but decently, salads, cooked vegetables, soups, fish dishes and more.
With fennel fruits and dry white wine, some say the Port is preferable, it gets a good digestive, good for hiccups and meteorism, but above all indicated as aphrodisiac and in cases of frigidity!
Always with the fruits, alcohol and sugar you can prepare the elixir to fennel.
The infusion of fruits of Fennel, oregano, mint and chopstick peduncles is recommended for cases of obesity; Leaves and fruits of Fennel are indicated in baths and steamings for facial cleansing; Decoction soothes eye inflammation.
But let’s see the preparation of a typical dish of Italian cuisine and precise that of the province of Palermo:
• Pasta with sardines, one of the many recipes that are often distinguished by small variations: For the pasta recipe with the Sicilian sardines, cut the fennel, obtaining only the tenderest part; Wash it and bake it in salted boiling water for about 10 minutes. Drain it by storing water in the pot. Clean the sardines, open them to the book, and remove the head and the bush with the tail. Simmer the raisins in the water. Chop the onion and pick it up in a large frying pan with fillets of broken anchovies, a glass of water, a pinch of salt and 70 g of oil; Cook until it sizzles, then add half a saffron sachet dissolved in a little water. Add to the onion the curled and squeezed raisins and the pine nuts, and season for 1 ‘stirring. Combine sardines, fennel, minced, and pepper; Put the lid and cook for 2 ‘. Dump the bucatini in the cooking water of the fennel, put back to the boil, then drain them to the tooth and pour them into the frying pan with sardines; Gently stir to flavor and let them rest for 2-3 minutes before serving them. To this delicacy you can add, for those who like it of the previously toasted and properly salted molli and adding pine nuts.
Anyway, in the kitchen you can use all the parts of the fennel. The white lump (mistakenly considered a bulb) of the cultivated fennel can be eaten raw in salads or boiled and grated and can be added to the stews.
As for wild fennel, called “finocchina” or “fennel” in the kitchen, either fresh or dried flowers are used, or fruits or “diachenes”, improperly called “seeds”, which are more or less sweet, peppered Or bitter, depending on the variety, both the leaves (or beard), and the larger or smaller shoots used in the Marches to cook the bombets (sea urchins); The leaves are used fresh and chopped to flavor soups, fish dishes, salads and cheeses: in the “pasta with sardines”, Sicilian recipe note, wild fennel leaves are one of the essential ingredients.
The flowers are used to aromatize boiled chestnuts, baked or baked mushrooms, pickled olives and pork (in particular the “porchetta” of Upper Lazio). So-called “seeds” are mainly used to flavor tarallini (Apulia), donuts or other homemade cakes and to spice hot wine or herbal teas. They are also part of the recipe of a typical Piedmont cookie, the fincchino. It is used in the coastal regions of the Tyrrhenian Sea, a “liqueur liqueur”, for which they use fresh flowers and / or seeds and leaves.
Harvesting for the consumption of wild fennel, both sprouts and leaves can be carried out throughout the year as needed. Seeds should be harvested to full ripeness and before they fall from umbrellas.
Seed preservation must be carried out after drying. It is important that the seeds are clean and well dried before placing them in jars, this to avoid the formation of dangerous molds.
Umbrellas are picked before the fall of the seeds in the late summer, twigs are tied into small bunches and kept for a few days in a warm, ventilated and dry place.
They are then left to the sun for a few days so that any residual moisture is eliminated.
They are then separated from umbrellas and cleaners and stored in glass jars, preferably with rubber gaskets.
Seeds also serve to flavor various fish dishes as well as meat and sausages.