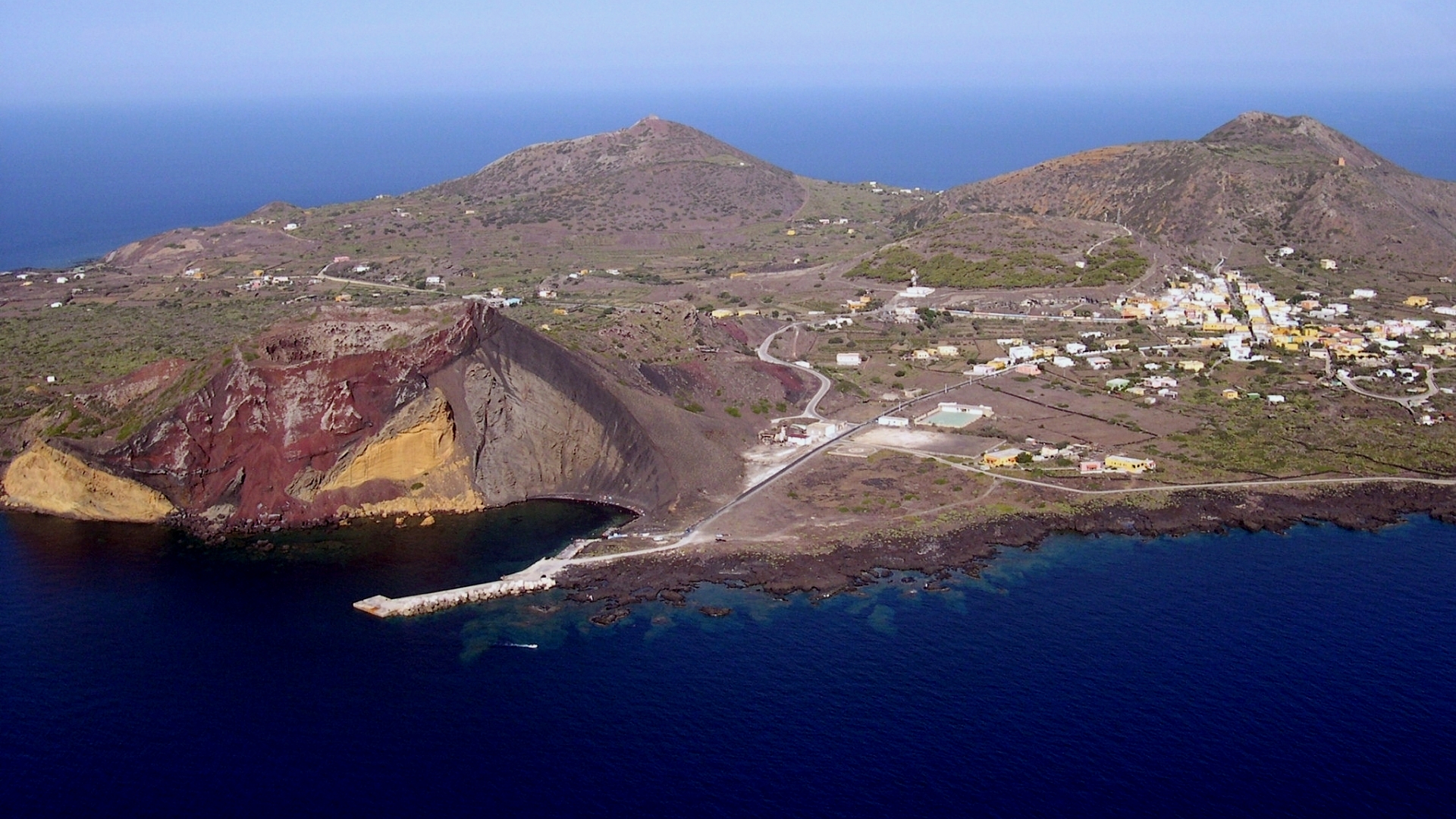 Linosa is an island in Italy belonging to the archipelago of the Pelagie islands, in Sicily. It has an area of ​​5.43 km² and is 42 km NE from Lampedusa, together with which it is the municipality of Lampedusa and Linosa which has 6,304 inhabitants in the province of Agrigento.

Etymology –
The island of Linosa is mentioned by the Greek Strabone and later by Pliny the Elder in the Naturalis Historia as Aethusa, Αἰθοῦσσα and Algusa, Ἀλγοῦσσα in Greek. The name Lenusa appears in the sixteenth century by the Dominican Tommaso Fazello. The name Linosa instead was born in 1845 used by the knight Bernardo Maria Sanvinsente.

Geographical features –
Linosa is located at the center of the Mediterranean Sea 160 km south of Sicily and 160 km east of Tunisia.
It has an almost circular shape with a coastal development of 11 km. Unlike Lampedusa and Lampione, which are part of the continental African plate and derive from a fracture of the continent itself, Linosa is not only not part of this tectonic plate but is also of volcanic origin and its building rises from fifteen hundred meters Depth: in fact, unlike Lampedusa and Lampione, the Linosa backdrops sink rapidly.
Its origins are relatively recent: according to geological studies Linosa had to emerge during the ancient Quaternary and owes its origin to the eruptions occurred along the fracture line that runs between the east coast of Sicily and the coast of Tunis.
Its eruptive activity dates back to the Pleistocene, a hypothesis corroborated by the age of the fossils present in the stratified tuffs of the eastern part of the Monte di Ponente.
The same volcanic axis gave rise, thanks to a basically alkaline volcanism, to the island of Pantelleria, whose portion emerged represents the culmination of much more imposing underlying structures.
In the volcanic history of the island it is possible to recognize four phases of activity and three paleosols witnessed by fossils of roots, jambs and leaves of dwarf palms.
The volcanic craters are still very evident: in the middle of the island, low and wide (600 meters in diameter), the main crater extends, the Fossa del Cappellano, densely cultivated. To crown another three cones: Mount Vulcano (195 m), Mount Rosso (186 m), Mount Nero (107 m), and a small Craterino of 50 m on the slopes of the latter. The eruptive activity from the last crater (the smallest) ended about 2500 years ago. Currently the island is deeply quiescent.

Historical Notes –
In ancient times it was a refuge for those who crossed the Mare nostrum: it is certain that the Romans used it during the Punic Wars as a base, and their remains remain in the 150 cisterns built to collect rainwater; furthermore, the depths of the surrounding sea are full of the contents of ships of the time, which have been wrecked over the centuries. The Carthaginian and Roman dominations followed the Arab-Saracen, the Norman and then the Angevin and then the Aragonese. After this last historical period, the island remained uninhabited and served as a makeshift port of Mediterranean piracy.
In 1555 a part of the fleet of Charles V returning from the victory of Tunisia against the Turks, was surprised by a strong storm and some ships shipwrecked on the rocks of Linosa.
In 1630 the king of Spain granted the family of the Tomasi the title of Prince of Lampedusa and therefore the dominion over Linosa. In 1776 one of the Princes Tomasi advised the King of Naples to sell the islands to the British, who were very interested in their strategic value, but the King did not grant it and bought them from the Prince himself.
In 1843 Ferdinando II di Borbone, King of the Two Sicilies, commissioned the knight Bernardo Maria Sanvinsente, a frigate captain, to colonize the islands. This happened on September 22, 1843 in Lampedusa. For Linosa it will be expected on 25 April 1845, when a first group of thirty people, composed of some families of skilled craftsmen from Ustica, Agrigento and Pantelleria (including a mayor deputy, a priest and a doctor), landed on the island. The settlers had been recruited with public announcement and would have received a pay of three Tari a day and the free use of 80 bodies of linosana land (about 240 hectares).
Few were the attentions dedicated to the island from the subsequent Kingdom of Italy and only with the beginnings of the sixties of the twentieth century Linosa begins to change its face: the first technical innovations come along with a tourist development. In 1963 SIP installed the first telephone exchange, in 1967 a power plant operated by SELIS began operating. In 1968 the new kindergarten building was inaugurated, dedicated to Pietro Taviani, as well as that of the elementary and middle school. In 1983 the construction of the desalter ensured a continuous supply of drinking water. In 1976 also the RAI arrives on the island which installs a repeater for the first and second channel, four years later the Mediaset networks also arrive. Later the dock piers were built at Scalo Vecchio, Pozzolana di Ponente and Mannarazza. Only in 1985 the ferry boat Paolo Veronese could dock at the quay of Scalo Vecchio.
The island has acquired over the years a livability more than decent, despite many services are still to be improved.

Ecosystem –
Linosa is part of the Linosa Island and Lampione nature reserve, managed by the Sicilian Region’s forest company, and along with the coastal stretches of Lampedusa and Lampione, of the Pelagie Islands Marine Protected Area, established in 2002.
The island of Linosa shows a rather differentiated flora compared to the other islands of the Sicilian Channel.
Besides the typical Mediterranean maquis species (Pistacia lentiscus, Euphorbia dendroides, Capparis spinosa, Thymus capitatus), Linosa can boast numerous exclusive endemic species of the island such as Valantia calva, Limonium algusae, Erodium neuradiflorum var. linosae, Valantia muralis var. intricate, Galium murale var. calvescens which are added endemisms shared with other neighboring islands such as Linaria pseudolaxiflora (present, besides Linosa, also in Malta), Oglifa lojaconoi (also present in Pantelleria), and Plantago afra ssp. zwierleinii (available in Linosa, Pantelleria, Lampedusa and Malta).
The fauna Linosana is very varied and special, there are some species that can only be found in this wonderful place. The beach of Pozzolana di Linosa is one of the last Italian nesting sites of the Caretta caretta turtle, as well as Site of Community Importance (SIC ITA040001). The island is home to the largest colony of Berta maggiore (Calonectris diomedea) in Europe and the largest in Italy, with 10,000 estimated nesting pairs (equal to over 60% of the Italian population, over 20% of the European population and about 15% of the entire Mediterranean population). The Mediterranean Major Berta also nests with a small population on the Island of Lampedusa and with about 200 couples on the Lampione islet. The colony is located in the “core” area of ​​the species, where conservation actions can have a decisive impact on the conservation status of the species; the other larger colonies are in fact found in the Channel of Sicily in Zembra (Tunisia), Malta and Pantelleria (Sicily).
The greater Berta is a procellariforme bird that lives most of the year in the open sea and uses the mainland only during the breeding season. Among the reptiles on the island, the endemic linosana lizard Podarcis filfolensis laurentimulleri and a particular species of skink, Calcides diomedea deserve mention.
Of the 308 plant species found in Linosa, 74 are noteworthy floristic emergencies of greater phytogeographic and / or conservative value, 22 of which are Briophytes. They are considered “floristic emergencies” because:
• protected by international regulations and directives;
• included in the regional “Red Lists”;
• exclusive endemics of Sicily, of the Apulian-Sicilian domain and of the central Mediterranean area;
• rare endemics on a national, regional and / or provincial scale;
• endemics at the margins of their distribution area (mostly Mediterranean South-Western and Central-Eastern) and / or their altitudinal range.
Regarding the habitats, regardless of their extension, it should be noted the excellent and sometimes excellent level of integrity / representativity of natural habitats.
A significant area of ​​the island is characterized by uncultivated in progress towards aspects related to the gariga and steppe habitats that already represent one of the most important pieces of the local semi-natural mosaic for their floristic wealth in general and for the high number of precious species that host. The same applies also to pre-forest environments coinciding with uncultivated tree crops, which could evolve towards richer and more complex communities of thermophilous spots, expanding and making forest surfaces more continuous.

Environmental Safeguard Actions –
Linosa plays a strategic role as a resting area for thousands of migratory birds during the Mediterranean crossing. The recovery of energy by these birds is only possible if the presence of diversified and species-rich natural and semi-natural environments is maintained on the island.
This is why Linosa can represent a laboratory not only for the protection of natural habitats but also for the promotion of a totally natural agricultural system oriented towards a biodiversity system of production systems.
The island of Linosa in fact, due to its characteristics, lends itself very well to promote research actions for the promotion of agricultural models fully guaranteeing the ecosystem and habitats that host flora and fauna of absolute value.