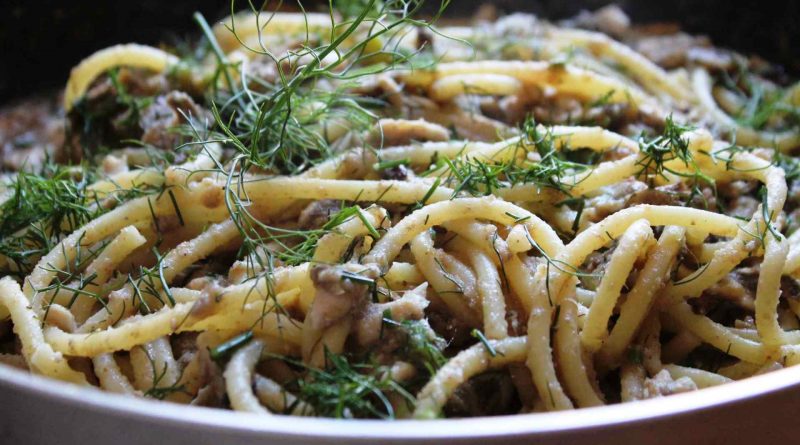 Pasta with sardines (in Sicilian called: pasta chî sardi) is a typical dish of Sicilian cuisine and included in the list of traditional Italian food products (P.A.T) of the Ministry of Agricultural, Food and Forestry Policies (Mipaaf).

Origins and History –
The history of pasta with sardines mixes between tradition and legend.
According to tradition, pasta with sardines was invented by an Arab cook of General Eufemio da Messina, during the military campaign of the Arabs in the area of ​​Syracuse even if, according to another version, which however is not very present in the sources, the fact would be happened in Mazara del Vallo.
Tradition has it that the cook had to feed the numerous troops, but being in disadvantaged conditions he had to appeal to his inventiveness and elaborate a dish with what the nature of that place offered him; so it was that he combined fish, represented by sardines (or anchovies in the version of the dish that dates back to the traditional Syracusan spaghetti), and the flavors of the earth: wild fennel, mainly, and pine nuts.
This is how this dish is nowadays considered as the first “mare-monti” dish in history, as it united, perhaps for the first time, the natural products of the sea and the mountain ones.
In detail, the legend tells that Eufemio da Messina fell in love with a nun and convinced her to leave her vows to make her her partner. Eufemio (this is history) brought the Muslims to Sicily to take revenge and marked the beginning of the new “lucky” domination (later interrupted by the Normans), landing at Capo Granitola near Mazara del Vallo. Many names and details are known about that landing and the conquest. There, however, many sardines had been fished and, being able to collect wild fennel on the spot, his cook of Eufemio – whose name has been lost – prepared for the first time this record-breaking dish, made of poor things.
Thus the invention is attributed to the commander Eufemio, a whimsical character who, according to legend, put his name on it. Incidentally, there were only very few real “Arabs” in Sicily: they were mostly Muslims from Egypt and Berbers. They fraternized, integrated, respected each other with the islanders, considering, as long as they could, as long as the Normans allowed them, Sicily as a common homeland.
However, it is not historically ascertained where pasta with sardines was born for the first time, so much so that to see its diffusion and its variants the origin seems to be from Palermo.

Geographic area –
Pasta with sardines is a typical Sicilian product which, with all its variations, is widespread throughout the island even though it is very present in Palermo cuisine.
However, there are different variations of pasta with sardines, linked to the different territories where it is prepared. One of the most famous is the “pasta with sardines in the sea”, this recipe is mostly famous in the Sicilian hinterland, called in this way to recall, in a nice way, the traditional recipe of pasta with sardines, which have been replaced sardines with salted anchovies. During the Second World War and especially in cities far from the sea, it was almost impossible to find fresh fish and, therefore, the sardines were soon replaced with salted anchovies. The recipe, therefore, is the same as the pasta with sardines but in the preparation they are not used because they are and are only found “by the sea”.
Among the different versions, the white one, flavored with the addition of saffron, the red one to which tomato extract has been added and the ‘ncasciata’, that is a timbale of pasta left to brown in the oven. In Messina, however, they are prepared without adding saffron.

Raw material –
In pasta with sardines the main ingredients are obviously sardines, pasta and fennel. Sardinian is a very common blue fish in the Mediterranean. It belongs to the same group as anchovies or anchovies, but it is fatter and therefore must be cooked no later than eight hours after fishing in order not to compromise its flavor. It is mainly fished from March to September. The sardines (or sardines) provided for this dish must be fresh and cannot be replaced with sardines in oil.
The sardines are cleaned and filleted, removing the head, tail and bone, then washed and dried between two clean cloths. As for pasta, three types of pasta are generally indicated, all of durum wheat semolina: bucatini; perciatelli, slightly larger than bucatini and also called by the generic name of macaroni; the mezzani or half ziti. The mountain fennel mentioned in the recipes is wild fennel.
In the pasta with sardines, the most tender and green parts are used, the shoots, the younger twigs and the typical feathery leaves (or beard), which can be collected in the countryside from spring to autumn, i.e. in the same period in which it is possible to find very fresh sardines in the markets. The other ingredients of the “classic” recipe are: onions, salted anchovies, raisins, pine nuts, a sachet of saffron, oil, salt and pepper. In the “Messina-style” variant, saffron is generally not used. It should be served with toasted breadcrumbs.

Description –
Pasta with sardines comes with a very rich sauce, consisting of sardines, fennel (but there are several variants including one with broccoli, and tomato paste in the variant of Agrigento.
Raisins, pine nuts must be added to this dressing, and breadcrumbs roasted with a little oil can be added before being consumed.
The appearance is then determined by the type of pasta used which, as mentioned, can consist of bucatini, macaroni or mezze penne.

Production Method –
The preparation of pasta with sardines has many variations so it is not easy to assimilate it to a single version.
Among the most common recipes is the one that involves boiling the fennel for about twenty minutes in as much salted water as you will need for the pasta (4 liters per 500 g), drain and chop. Keep the water aside. In a pan, sear the sardines in 1 dl of extra virgin olive oil (one minute per side), drain and reserve. Sauté the finely sliced ​​onions in the same pan until lightly colored and then add the fennel, sardines, raisins (soaked in warm water for half an hour), pine nuts, salt and pepper. Cook over low heat, stirring, to mix the sauce.
After about twenty minutes, add the anchovies that have been desalted, washed, dried and finally dissolved in a pan with a spoonful of hot oil. Cook for another 15 minutes, stirring constantly and then add a sachet of saffron, dissolved in a tablespoon of the cooking water of the fennel. Meanwhile, cook the pasta in the fennel cooking water. Drain it al dente and add it to the sauce. Leave to rest for a few minutes before serving.
To this version, which we can define as basic, several variants are added.
Among them, that of the so-called “in bianco” area of ​​Palermo without the addition of tomato sauce, and another widespread in the Agrigento area where tomato concentrate is required in the preparation phase. This recipe is so widespread in the Palermo area that over time several variations have established themselves, both in the family tradition and in the kitchens of great chefs. Some put onions, shallots and a clove of garlic in place, wet the sauté with a glass of white wine and use desalted sardines instead of desalted anchovies. Others add only half of the sardines to the fried onion; they drain the pasta al dente, mix it with the sauce, put it in an oven pan and cover it with the other half of the sardines, browned in a second pan in their sauce. Finally they sprinkle the surface with chopped almonds and bake the pan for ten minutes.
Others suggest simply letting the seasoned pasta rest for ten minutes before serving. Finally, a rather common variant is pasta with sardines “alla milanisa”, which involves pouring 3 dl of tomato sauce once all the other ingredients have been combined in the pan. Cooking should continue for about 30 minutes over low heat. Once drained, the pasta is seasoned with the sauce and sprinkled with breadcrumbs, toasted in a pan with two tablespoons of oil.

Gastronomic use –
Pasta with sardines is a dish that provides a fair amount of calories. Energy is mainly supplied by carbohydrates, but also the lipid contribution (with distribution in favor of the unsaturated ones) contributes considerably. There is not a lot of protein and fiber is scarce, as is cholesterol. Pasta with sardines is a first course suitable for diet against dyslipidemias (increased plasma cholesterol, triglycerides, or both, or low HDL cholesterol level), but must be consumed in moderate portions by diabetics and those overweight.
For this reason it can also be considered a single dish as it contains everything you need for a complete meal.
However, also depending on the areas where it is prepared, it is eaten as a first course followed by fish dishes or as in some typical restaurants it is accompanied by house specialties.