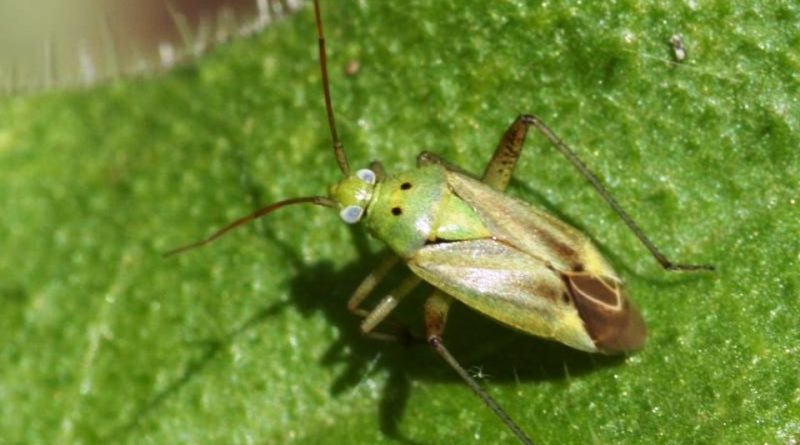 The potato capsid (Closterotomus norvegicus Gmelin, 1790) is a small insect belonging to the Miridae family.

Geographic Distribution and Habitat –
Closterotomus norvegicus is a widespread insect in the British Paleartic Islands east through continental Europe to Siberia. It is also found in the Neartic as an occasional species and is extremely polyphagous; it lives both on wild herbs and on different crops, such as: fodder (alfalfa and clover), soybeans, chard, sunflower, vegetables (bean, green bean, broad bean, potato, tomato, etc.), floricultural, fruit trees (in particular peach and pear ) and lives.

Morphology –
The adult insect is recognized by its elongated oval shape, with a green or yellowish-green color covered with fine black bristles. The female is larger than the male and measures 7.5-8.5 mm.
It has a very developed rostrum.
The antennae are filiform and very pronounced antennae.
There are two black spots on the wings, one for each wing, and the terminal part of them is black.
The legs are long.

Attitude and Life Cycle –
The potato capsid overwinters in the egg state, present on stems of herbaceous plants, in the ravines of host plants or on wooden support poles.
The nymphs appear from late February in the south, or from the end of March in the north and start their activity.
Adults appear in June; these may eventually give rise to a 2nd generation between July and August-September.
This insect therefore completes one or two generations per year.
The presence of this insect, if present with high infestations, can cause damage both on the fruits and on the shoots. The damage is caused by trophic stings, especially by nymphs.

Ecological Role –
Adult and juvenile forms of Closterotomus norvegicus attack bean and green bean shoots, leaf ribs and pods, ripening seeds and pear and peach fruits. Following the bites of nutrition and oviposition there are vegetative stops, abortions of flowers and seeds, necrosis of tissues, deformation of the fruits and transmission of viruses. The shoots and fruits sting on peach trees, causing the apex to be blinded on the former, with the arrest of development, and consequently there is the development of adventitious vegetation.
On young fruits, 2-3 cm in diameter, they cause lesions with the emission of gum, on those growing, more or less large and deep lesions develop in which the larvae of Euzophera bigella (euzofera) can settle.
On fruits already developed or in the course of ripening, the nutrition and oviposition punctures cause punctate lesions of blackish color with emission of gum. On pear fruit they cause lithiasis, that is the appearance of depressions of a few mm in diameter with a flat bottom with necrotic lesions in the center, left by the buccal stylets; the underlying pulp develops clusters of hard consistency and yellow.
Interventions to limit the damage of this insect must be agronomic and agroecological.
Recall that the adults of Closterotomus norvegicus are very mobile, so they often manage to avoid insecticide treatments which, among other things, would suffice the useful entomofauna.
Agronomic interventions are very useful. In young plants, it is advisable to avoid the cultivation in the inter-row of attractive crops for myrids, such as potatoes, beans and broad beans. Therefore, in the case of associations, these crops must be avoided.
The management of the flora (herbs) is very important as it is useful to eliminate or maintain it according to the different moments; the elimination of herbs in the orchard is useful before the development of the young forms, or immediately in the early stages of development, in order to hinder their growth; while it is useful to leave the grasses in the inter-rows and in the ditches surrounding the orchard when adults are found on them, as the Closterotomus norvegicus and other myrids can find nourishment there and avoid infesting the orchard; Mowing and, even more so, the weeding of herbs in the orchard and along ditches must be avoided.
The chemical fight is to be avoided and, only in extreme cases, must be of the guided type and is carried out against the first generation nymphs.
The technique involves sampling, to determine the presence of nymphs or establish the start of their activity, by identifying the damage.