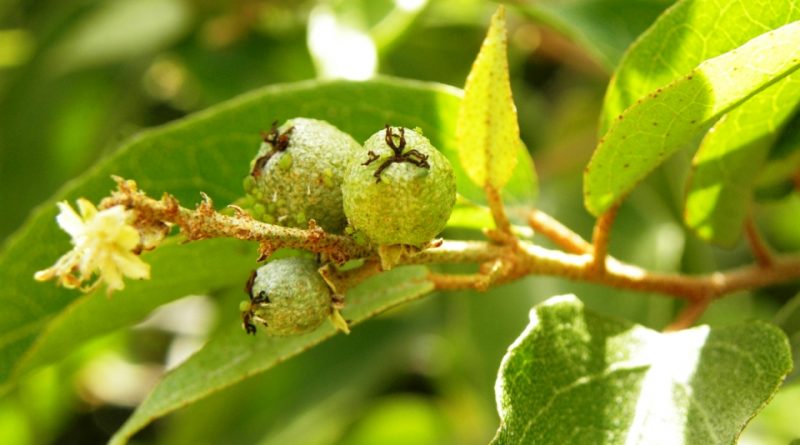 Etymology –
The term Croton comes from the Greek kròton, the name of the common castor oil, which is also mint, perhaps for the reason of the similarity of the fruit, which is a tricot capsule, with the animals of this name.
The specific epithet eluteria is not known, it probably derives from some vernacular name.

Geographic Distribution and Habitat –
Cascarilla is a plant native to an area that includes the Caribbean, the Bahamas, Cuba, the Dominican Republic, Haiti and Jamaica. It has also been exported to Nigeria where it is grown for bark production.
Its habitat is that of groves and woods on limestone soils in both dry and humid areas at altitudes ranging from sea level to 870 meters. 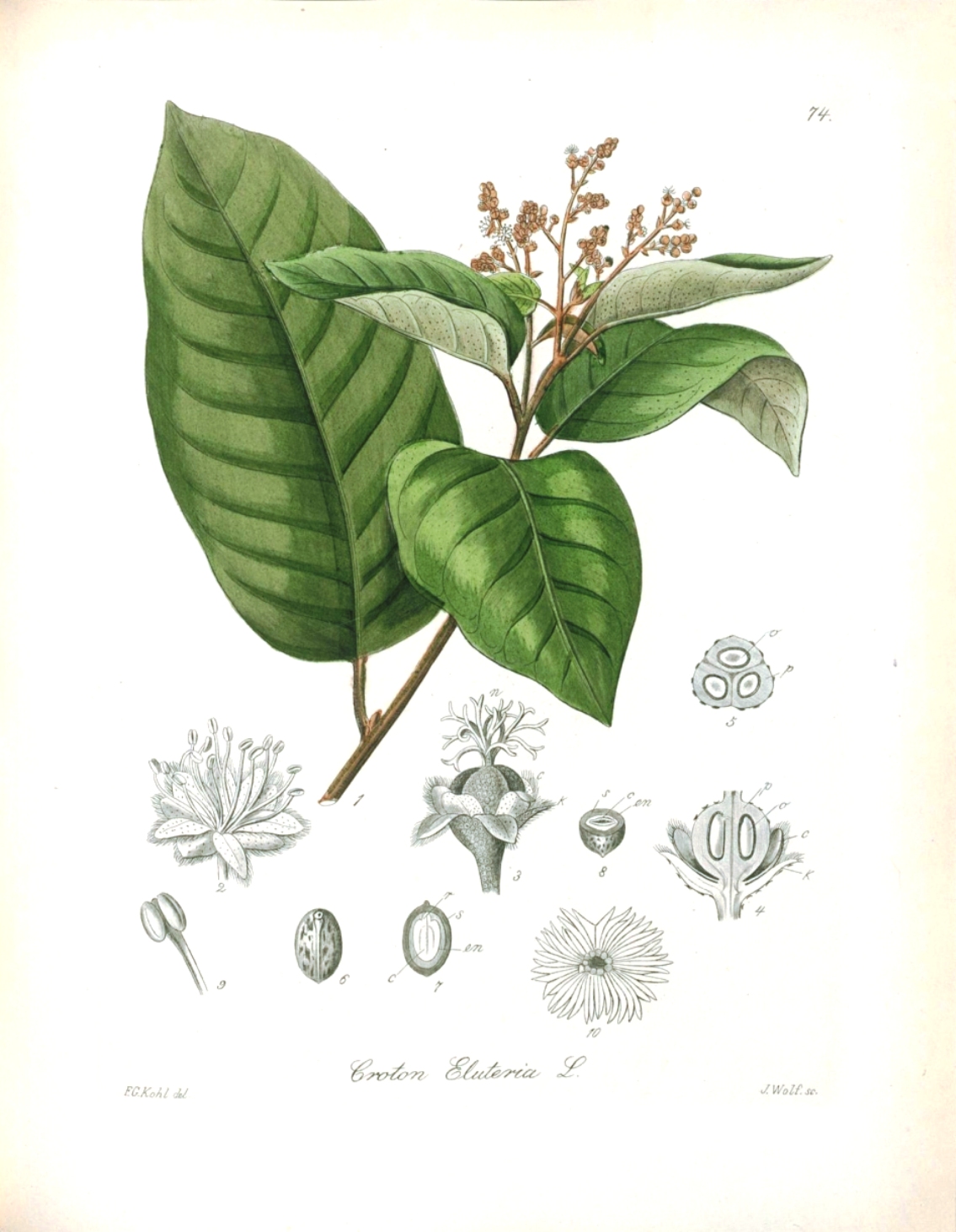 Description –
Croton eluteria is a plant that appears both as a shrub 1.5 – 3 meters high and as a small tree that can grow up to 12 meters.
The bark is fragrant and fissured, light yellowish brown in color and can be covered with lichen.
The leaves are elongated oval, from 5 to 20 cm, rounded at the base and at the tip, opaque green and arranged alternately at the ends of the branches. They remain on the plant all year round.
The flowers are small, with white and very fragrant petals, appear in March and April, but can bloom, in certain climatic conditions, all year round.
The fruits are small, round up to 1 cm in diameter, initially green, which become brown, dry and with three compartments enclosing a long seed.

Cultivation –
Cascarilla is a plant that grows naturally in sub-humid to humid subtropical climates and from tropical lowlands to medium altitude, generally in frost-free areas with annual lows of 16 to 25 ° C, annual highs of 25 to 35 ° C, annual rainfall of 800 to 2500 mm and a dry season of 8 months or less.
It is also not commonly grown as a garden plant but can also be propagated by seed. In addition, due to its distribution it is believed to grow on a wide range of well-drained soils, including clayey soils or those with sand and limestone or gravel content, generally moderately acidic to alkaline in nature, with a pH between 5.0 and 8.5.
It should be emphasized that the natural adaptation of the plant to the tropical areas of the plateau and its small size have led to it being planted to shade the coffee, in particular seedlings and young plants.

Customs and Traditions –
Cascarilla has a very long history of use in traditional herbal medicine around the world.
The bark is antispasmodic, antitussive, bitter aromatic, carminative, cholagogue, digestive, expectorant, febrifuge, hypotensive, stimulant and tonic.
It has long been used as a general bitter digestive aid, to stimulate digestion and promote the flow of digestive juices.
It is also used in the treatment of a number of problems related to the digestive system such as nausea and vomiting; diarrhea and dysentery; dyspepsia and colic; intestinal swelling and bloating.
It has also been used in the treatment of a wide range of other conditions including intermittent and low fevers; as an expectorant for chronic bronchitis; anemia, hemorrhoids, hypertension and as a general tonic during convalescence.
The plant is often used in herbal medicine, the bark is collected in nature and traded internationally.
The bark of Croton eluteria was known in Europe after that of cinchona and so was called in some countries “new cinchona bark” or “false gray cinchona bark”.
Cascarilla contains a range of medically active components including volatile oils from 1.5 to 3%, a bitter compound called cascarillin A, resins, tannins, lipids and several neoclerodanic diterpenoids called cascarillins. The bark also contains a long list of aromatic terpenes and diterpene compounds, including pinene, vanillin, D -limonene and tujene.
Research has shown that the essential oil of the bark is antimicrobial. The long-standing traditional use for digestion was verified by scientists in 2003. These researchers in Italy reported that cascarilla and its main chemical compound, cascarillin, significantly increase gastric acid secretion. in the stomach.
The bark tincture is used as a tonic and stimulant and as a fever reducer. Cascarilla bark is also used to flavor Campari and Vermouth liqueurs.
The bark is relatively thick, flexible, and easily cut and torn from the trunk. It is then cleaned of any sapwood, dried in the sun or in the shade, and bagged for transport to a processing plant, where it is distilled into an essential oil, made into an aqueous extract or infused into alcohol to make a tincture.
With steam distillation, the bark produces 1.5 to 3% of a commercially important essential oil traded as “Cascarilla essential oil”. It is a fluid, light yellow or dark amber oil with a strong woody, spicy, slightly peppery aroma that is persistent, reminiscent of nutmeg, cardamom, cloves and thyme. It is used as a fragrance component in perfumes, especially oriental perfumes such as “l’Origan” and in men’s fragrances and colognes, as well as to perfume soaps, creams and lotions.
The taste of the oil is strongly bitter but pleasantly spicy and is non-toxic in small quantities, which has led to it being used as a flavoring in alcoholic and non-alcoholic beverages, confectionery, baked goods, frozen desserts and condiments.

Preparation Method –
From the bark it is possible to obtain tinctures or, by distillation, to obtain an essential oil that can also be used for various types of drinks, including alcoholic ones.
The bark, as mentioned, as well as for pharmaceutical purposes can be used as a general bitter digestive, to stimulate digestion and promote the flow of digestive juices.