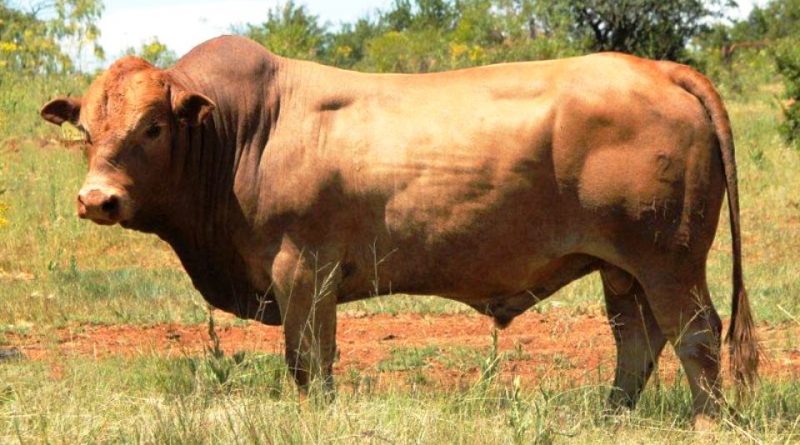 The Tuli is a mixed breed cattle breed (Bos taurus Linnaeus, 1758) originally from Africa for the production of meat.

Systematic –
From a systematic point of view it belongs to the Eukaryota Domain, Animalia Kingdom, Sub-Kingdom Eumetazoa, Superphylum Deuterostomia, Phylum Chordata, Subphylum Vertebrata, Infraphylum Gnathostomata, Superclass Tetrapoda, Mammalia Class, Subclass Theria, Infraclasse Eutheria, Order, Suborder Ruminantia, Infraorder Sheep, Family Bovidae, Subfamily Bovinae and therefore to the Genus Bos, to the Species Taurus, and at the intersection of the two subspecies B. t. taurus and B. t. indicus and the Tuli breed.
It has been suggested that it would be more correct to classify the Tuli breed as a subgroup of the Bos taurus africanus.

Geographical and Area Distribution –
The Tuli is an African bovine breed of origin between Zimbabwe and South Africa, of mestizo origin, obtained from African zebu.
The tuli breed finds good conditions in the sandy and semi-desert areas of Namibia, Botswana and the Northern Cape; in the warm arboreal areas of the heart such as Zimbabwe, the province of Limpopo and the Lowveld of Mpumalanga; but it also adapts to the heavy rains that generate the high altitude springs Mpumalanga and Natal, where red waters abound; in the Drakensberg Mountains where it snows regularly; on the extensive savannah grassland; in the arid Karoo (arid region of the South African hinterland arid region of the South African hinterland) with its scrub bushes; in the cold misty mountains and in the coastal scrub of the Eastern Cape.
Today there are also Tuli breed heads Tulis in Australia, Canada, the United States, South America and tropical Zambia.

Origins and History –
The history of the selection of this breed, of mixed African origin for over two thousand years, begins in the middle of the last century.
The selection of this breed was anticipated by addresses on the farms that, in the early 1940s in southern Rhodesia (today Zimbabwe) the government was promoting for improvement of the livestock on the basis of which the bulls of the imported European breeds were made available to the indigenous people.
The idea was to “improve” indigenous cattle. Len Harvey, a South African-born agricultural consultant who works for the government, had serious reservations about the idea. He believed that imported animals and their offspring would probably never survive the very hostile environment. Harvey previously noted that among the Tswana-type cattle, in the southwestern corner of Zimbabwe where it was registered, there was a particular yellow type, constantly in good condition and apparently better adapted to the environment. It took him four years to convince the people who were in power.
As early as 1945, some 3,000 acres of land in the Tribal Trust area, 40 km southwest of Gwanda, were set aside for a livestock breeding program with the “revolutionary” goal of improving indigenous livestock through a process. selection instead of intersections. The necessary infrastructure was built and in 1946/47 the first group.
After various vicissitudes and selection actions, it arrived in late 1976, when a group of thirty pregnant females and three bulls were imported into South Africa in Zimbabwe. The importers were the Bornmann family assisted by a veterinarian who was Dr. Fanie Kellerman.
The first cattle of this breed were presented to the South African public on the occasion of agricultural shows. Information days and prestigious auctions were held and gradually the Tuli cattle were also appreciated in South Africa.
Subsequently, the Tuli Cattle Breeders Society was formed on March 24, 1994, which was preceded by a Tuli Club.
In 2013 there were already about 72 Tuli breeders with just over 8400 registered live animals.

Morphology –
The Tuli cattle breed is characterized by having a good size, as they are animals of high height at the withers, with 130-150 cm.
They have a coat of fromentino color that can oscillate up to deep red.
The horns are generally absent.
The muzzle is rosy.

Productive attitude –
The Tuli is a bovine breed with a prevalent aptitude for the production of meat.
It is a breed particularly suitable for extensive breeding systems. It has the unique ability to use even the worst quality pasture and still produce high quality meat. The extraordinary adaptability of the Tuli breed is evident when considering their distribution.
The improvement of this breed, among other things, focused on female fertility, milk production and low mortality, while for the bulls it was growth, feed conversion and carcass quality. Great care has always been taken not to compromise the breed’s natural strength and adaptability.