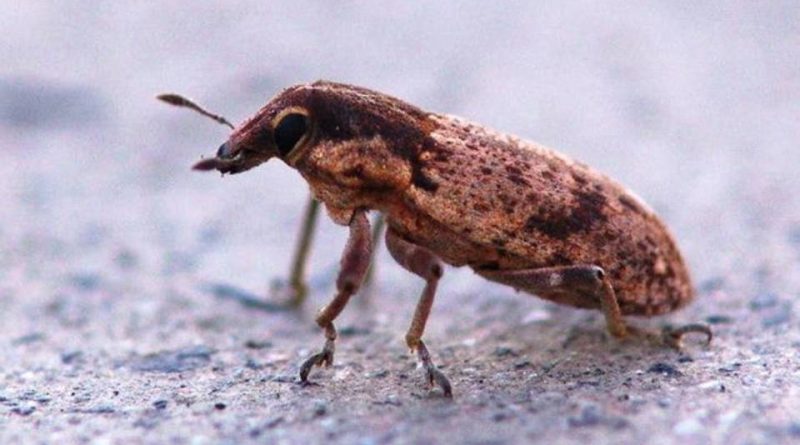 The beetle Cleon (Conorhynchus mendicus Gyllenhal, 1834) is a beetle belonging to the Curculionidae family.

Geographical Distribution and Habitat –
The beet’s Cleono is a polyphagous species, present in most of temperate Europe and in other parts of the world, which lives on wild Chenopodiacee and attacks sweet beetroot.

Morphology –
The Cleono della Bietola is a Curculionide which has the typical arched and elongated rostrum.
The insect is long, on average 14-16 mm and has a gray-ocher color due to the presence of small scales that cover the body, in particular the elytra and the thorax, whose background color is instead brownish-black.
The eggs are light orange in color with a diameter of 1 mm.
The larva is apoda, whitish in color, about 13 mm long, fully developed and arched in the resting phase.

Aptitude and biological cycle –
Conorhynchus mendicus overwinters in the adult stage, generally in the ground; in spring the adults come out. The oviposition takes place at the base of the host plants and makes only one generation per year.
The adults, after the initial moult, remain in the soil without feeding, where they overwinter and in the spring they begin to feed on the young Beet plants.
Subsequently they mate and lay, in a scaled way, generally at the base of the host plants.
The spawning takes place in the period from May to October, in the soil, near the host plant.
The larvae are born after a period of embryonic evolution that lasts 8 – 10 days; reached the end of the growth, at the end of 40 – 45 days, they pass to the stage of nymphosis in small earthy niches. The larvae progressively sink into the soil along the pivot of the plant which they gnaw superficially, later on, deeper they practice characteristic excavations.
On wild Chenopodiacee (Atriplex halimus, Beta vulgaris maritima), the species overwinters in the advanced larva stage.
The egg stage has a developmental duration of 10 days.
That of larva, from 6 to 7 weeks.
That of nymph about 15 days.

Ecological role –
The damage is caused by both larval stages and adults.
The larvae, as mentioned, are brought to the taproot and practice typical erosions; these are first superficial, then deeper and more internal, causing losses both in sugar and in weight. The affected taproots can also be attacked by rotting agents and completely degenerate.
Adults feed on leaves instead on which they cause more or less serious erosions, depending on the phenological stage of the plant which can also lead to failures.
In Italy in the northern regions, the larvae develop when the stems are already well formed. In the South on the contrary, these are arranged on the younger stems which gnaw causing a loss of sugar in the beet and / or causing the plant to rot.
The fight against Conorhynchus mendicus is preventively agronomic through agro-ecological practices which essentially consist in the search for rotations that allow a certain rest on the ground, for at least 4-5 years; the purpose of the rotation is to reduce the pest potential, especially in case of serious infestations in the previous years.
Another precaution is to avoid the extension of the fields with associations that obviously do not include other chenopodiaceous plants and the control of fertilizations with organic substances and elimination of nitric nitrogen.
If after such measures an infestation that is still potentially harmful should occur, the chemical fight must follow the criteria of the guided and integrated fight, carrying out it against adults, before the oviposition.
The treatments are performed after a careful evaluation, through careful and frequent checks, of the population present; sampling can be carried out with trap-trays (at least 2-3 series of 5 jars) placed, from the beginning of April to the end of June, a few meters from the edges of the plots and buried with the upper opening at ground level. In this case the threshold is 2 adults caught per pot per week.
The treatments are performed at the appearance of the first adults and, generally, they are 1 or 2 (the second after about 10-15 days from the first).
However, it should be remembered that the chemical intervention can negatively interfere against the natural enemies of Cleono, present with a moderate natural population in Northern Italy. These include two Tachinidae Diptera: Rondania cucullata and Zeuxia cinerea which are important parasitoids of adults and larvae respectively.
Furthermore, interesting results have been obtained in biological control tests of the larvae using entomoparasitic nematodes applied to the soil (gen. Heterorhabditis).