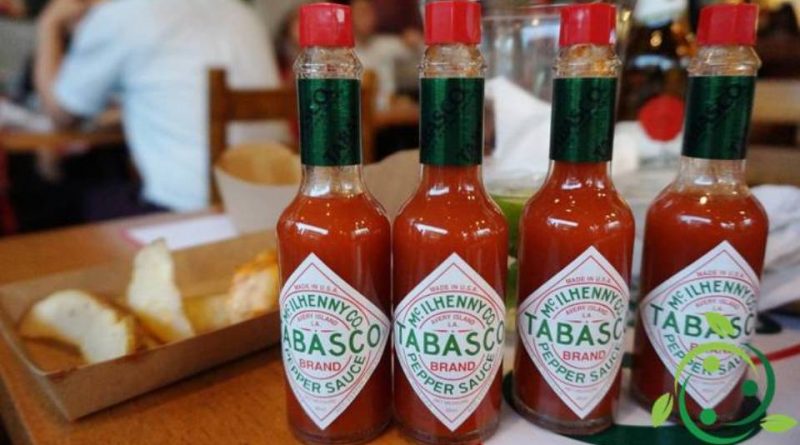 Tabasco is a spicy sauce, obtained by using the capsicum frutescens pepper variety of the same name, produced by a private company that holds the patent since 1870.

Origins and History –
Tabasco is a spicy sauce whose name derives from the homonymous state of Mexico and produced by the US company McIlhenny Company, based in Louisiana, which has held the patent since 1870 and is the owner of the Tabasco Sauce brand.
Tabasco is therefore the first industrially produced spicy sauce in the United States, starting in 1859, and is still one of the best known: according to Package Facts in 1992 it had a market share of 26.6%.
The original product is marketed under the Tabasco Pepper Sauce label, and McIlhenny over time has expanded its range of Tabasco sauces to face the competition, bringing the choice to eight different types of sauces and almost always lowering the spiciness compared to the sauce. original, except in the case of Tabasco habanero sauce, which reaches a spiciness degree of 8000 SU.
Salsa has a curious history that began a few years before the outbreak of the American civil war; the first version of the salsa (initially Tobasco sauce, a term that was the spelling of the name of the state belonging to Mexico) was due to Colonel Maunsell White; he gave the recipe for the sauce and some chillies for its preparation to a friend of his, Edmund McIlhenny, who began their cultivation on Avery Island.
Subsequently, in 1863, following the outbreak of the secession war, McIlhenny and his family took refuge in Texas. In 1865 McIlhenny returned to Avery Island and, despite the considerable damage to his plantation, he managed to put the cultivation of chillies back on their feet. In 1870 he patented the sauce calling it Tabasco. The success was immediate, so much so that, two years after the patent was issued, an office was opened in London for the sale of Tabasco sauce on the European continent. The success of McIlhenny’s sauce was so enormous that the imitators were not lacking (think of the version of the Tabasco sauce proposed by Heinz, the company known above all for the development of the ketchup sauce recipe). The McIlhenny Company still holds rights to the Tabasco sauce.
In 1889 Heinz imitated the sauce, with the name of Heinz’s Tabasco Pepper Sauce, without however being able to compete with that of McIlhenny. Edmund McIlhenny’s son, John, inherited the company in 1890, when a bad vintage ruined the harvest. Fortunately, there were enough reserves of fermented chillies to continue the sale. Since John was unable to find fruit in Mexico that would meet his needs, the company has since expanded its contracted crops to Honduras, Colombia and other states of central and southern America. In 1898 B. F. Trappey, another Louisiana entrepreneur, former McIlhenny employee, began growing tabasco from Avery Island seeds. His B. F. Trappey and Sons made his sauce, also called “Tabasco”. The McIlhenny sued them and after a long controversy, they obtained copyright on the “Tabasco” brand in 1906.
The registered trademark did not prevent other companies from using the name “Tabasco” in their products: in 1911 the “Joseph Campbell Company”, that of the famous soup immortalized by Andy Warhol, began the sale of Campbell’s Tabasco Ketchup, calling it the “appetizing” spiciness of Tabasco sauce in a more delicate form “. Noting the commercial success of McIlhenny’s Tabasco, many other Louisiana producers entered the market, and only in 1929 did the McIlhenny Company obtain exclusive rights to the Tabasco name, winning a lawsuit against Trappey.
Today the production of Tabasco would still take place according to the traditional method; chillies are harvested by hand; to verify the right degree of ripeness, the harvesters have at their disposal a special red stick, the petit bâton rouge; only the berries whose color gradation is identical to that of the stick are harvested.

Description –
Tabasco is a spicy sauce, obtained by using the capsicum frutescens pepper variety of the same name with the addition of salt and vinegar.
Almost all the types of this sauce are produced with alcohol vinegar (distilled vinegar) and not with white wine vinegar.
The sauce has the appearance of a normal tomato sauce, of an intense red color, rather dense and is one of the best known spicy sauces ever.

Properties and Uses –
Tabasco, as mentioned, is a spicy sauce obtained using a specific type of red chilli pepper (Capsicum frutescens variety Tabasco), salt and vinegar.
Tabasco sauce, produced by an American company, the McIlhenny Company, based in Avery Island, an island in the state of Louisiana, is marketed in many countries around the world and the annual production is around 720,000 pieces. The classic format is the 57 ml (2 oz) format, but there are also different formats on the market.
In addition to the original recipe, other versions of Tabasco sauce are produced, each of which has its own degree of spiciness; the original sauce has a relatively high degree of spiciness (based on the Scoville Scale) (2,500-5000 SHU, Scoville Heat Units).
Other variants are the Habanero tabasco sauce (the most spicy variant, 7.000-12.000 SHU), the tabasco sauce with green jalapeño peppers (600-1.200 SHU), the tabasco sauce with chipotle peppers (1.500-2.500 SHU) and the flavored version with garlic (100-600 SHU).
Habanero is often used to flavor exotic fruits such as mango, papaya, tamarind, etc .; the sauce with green jalapeño peppers is excellent with pasta, pizza and salads; the version with chipotle peppers is particularly suitable for flavoring grilled meats, while garlic flavored tabasco is recommended for flavoring pasta, fish and chicken.
Given that “Tabasco” is the name of a Mexican state, the exclusive use of the name in another geographical area is a curious but not unique fact: an equivalent situation occurs with regard to a PGI product called “calabra sauce”, registered in Spain.

Preparations –
For the preparation of Tabasco, only plants of Capsicum frutescens cultivar “Tabasco”, well ripe and fresh, should be used. McIlhenny’s crops have a stick painted the same red whose fruits must appear: in fact, neither the greenest nor the most ripe ones are used.
In any case, the normal “Cayenne” or “Thai Dragon” can also be used, both Capsicum annuum cultivars, although obviously the flavor changes. There are also variants with Scotch Bonnet or Habanero (cultivar of C. chinense), much spicier.
Below is the original recipe, of which the exact quantities and seasoning times of the finished sauce are kept secret.
The ingredients are:
– Tabasco peppers 640 g;
– Coarse salt 20 g;
– Alcohol vinegar 20 cl.
The preparation foresees that for the macerate, the chilies, including the seeds, must be finely chopped. Salt is added and left in a sterile container closed with a clean napkin.
At this point it is left to ferment for at least a month, preferably longer: the original ferments for three years. When the fermentation stops, the macerate is placed in a new container, adding the vinegar and letting it rest for at least a week. After that, put the mixture in a colander and squeeze out the liquid.
At the end of this procedure it can be bottled and stored in the fridge, possibly adding salt.
Currently there are eight different varieties of Tabasco sauce comes:
– Original Red Sauce, produced with Tabasco pepper;
– Green Jalapeño Pepper Sauce, produced with Jalapeño pepper;
– Chipotle Pepper Sauce, produced with Chipotle pepper;
– Buffalo Style Sauce, specially made for Buffalo chicken wings;
– Habanero Sauce, made with Habanero pepper;
– Garlic Pepper Sauce, produced like the original with the addition of garlic;
– Sweet & Spicy Sauce, sweet sauce produced with Tabasco and Far Eastern ingredients;
– Sriracha Sauce.