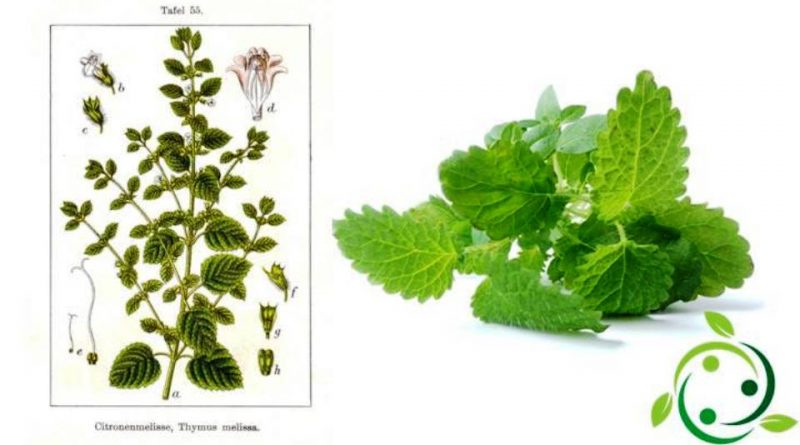 Origins and History –
Lemon balm, also called cedronella or limoncella, is a plant native to Eurasia, spontaneously traceable along paths, hedges and ruins, cultivated in the past also in vegetable gardens.
In the 10th century, the Arabs used it as cordial and against melancholy. Lemon balm enters the composition of the “chartreuse” of the “bénédictine”.
Lemon balm is one of the ingredients of the well-known “Barefoot Carmelite antisteric water”, a useful remedy in case of insomnia and nervous excitement.
The name Melissa derives from the Indo-European root “Mel”, the same from which the term “honey” comes. His is an ancient history, having been cultivated by many civilizations, such as the Arabs, the Romans, the French, who already knew their many healing properties.
It was the Greeks who called it “lemon balm” (which means bee friend), because thanks to its lemon scent, released especially by the rubbing of the leaves, it attracted the swarms offering bees an excellent food to produce honey (divine symbol).
In many ancient civilizations, the nickname ” Melissa ” was used to refer to women considered particularly wise and rich in virtue.
The Priestesses of the mysteries of Eleusis and Ephesus were also called “Melisses”, because in the initiation rites they washed their hands and mouth with honey, as a wish for the purification of actions and words.
Lemon balm was first introduced into medicine as a morally exhilarating and nerve-comforting remedy.
Galen and Paracelsus advised her in mania and mental disorders. Serapio wrote that relieves the restlessness and sadness of the brain and mainly those produced by melancholy.
The Arabs held it in high regard: the doctor Avicenna already in the eleventh century attributed to the species “the wonderful property of cheering and comforting the heart”. Its essential oil was judged by the Arabs to be suitable for strengthening the heart and brain.
The Alcohol of Melissa, or “Melissa Water” invented by the French Discalced Carmelites in 1611, was for its antispasmodic properties a popular remedy to which all social classes resorted in the critical moments of their life (from toothache, to syncopes, nervous breakdowns etc.).
During the Middle Ages, lemon balm became known as a medicinal herb. Charlemagne ordered its cultivation in the vegetable gardens of the kingdom, and the “melissa water” of the French Carmelites became a liqueur very renowned for its effectiveness against physical and nervous pain.
Still today herbal teas and lemon balm infusions are appreciated for the calming and mildly sedative effect they possess, as well as being recommended to stimulate the digestive organs when nervous disorders occur.
In the kitchen, fresh lemon balm leaves are used for soups, salads, omelettes and stuffed meats.

Description –
Melissa officinalis is a perennial herb with a bushy habit, with horizontal rhizome and stem (80 cm) branched at the base, quadrangular and hairy.
The leaves are petiolate, hairy ovals, with toothed margin and furrowed by numerous veins.
The flowers, initially yellowish-white in color, then take on light pale pink shades; they have the shape of a bell-shaped chalice.
The corolla also tubular, has the lower lip divided into three lobes with the central one larger than the two lateral ones.

Properties and Uses –
Lemon balm leaves, rich in essential oil, which gives the plant a pleasant aroma and flavor of lemon, are used in states of anxiety with somatization on the gastrointestinal system.
Among the healing properties of this plant we mention the following: antispasmodic, choleretic, emmenagogue, antibacterial, aphrodisiac, antacid, anxiolytic, sedative. Flavonoids and triterpenes have recently been shown to also exert an antihistamine action. Rosmarinic acid, also present in other Lamiaceas, has an antithyroid action, preventing the binding of the thyroid stimulating pituitary hormone (TSH) with specific membrane receptors.
The polyphenolic fraction and some components of the essential oil instead demonstrate a specific antiviral activity against Herpes virus.
The essential oil has stomachic and carminative properties, also stimulating choleresis (biliary secretion) and diuresis, useful in case of indigestion, abdominal cramps and flatulence.
For these properties it is therefore indicated for the following therapies:
– Neurotonic states of adults and children.
– Anxious and anxious-depressive syndromes.
– Sleep disturbances of nervous origin.
– Gastrointestinal functional disorders (gastrointestinal neuroses such as dyspepsia, aerophagia, flatulence, nausea, vomiting, gastritis, peptic ulcer, gastrointestinal spasms), small liver failure, biliary dyskinesias.
– Painful manifestations of nervous origin (cardiac psychosomatisms such as palpitations, extrasystoles, tachycardia), dizziness, buzzing and psychogenic tinnitus originating from stress and emotions, migraines of nervous origin.
– Neurovegetative dystonias of menopause and premenstrual syndrome (dysmenorrhea), algic forms in general.
– Cold sores.
Among the contraindications and side effects of lemon balm are: hypothyroidism; essential oil in excessive doses can cause stiffening and sleep with slowed breathing, hypotension.
The pure essence of lemon balm is considered an amazing but little toxic and in small doses it causes numbness and slowing of the heartbeats.
Lemon balm is a good honey plant, but honey cannot be produced due to the sporadic presence of the plant, both cultivated and wild.

Preparations –
Lemon balm leaves are used, both for therapeutic purposes and in the kitchen, with flowering leaves and tops.
In popular use, lemon balm is appreciated as an aromatic herb: its fresh leaves are used to flavor many foods where the smell of lemon that emanates by rubbing the leaves is appreciated.
The conservation of lemon balm is done by cutting the plant when it is still in bloom: the branches are tied in small bundles and hung to dry in a cool and dry place. This kind of plant is also grown industrially: in fact, the fresh leaves and flowers are collected twice a year and distilled; the product obtained is the essence of lemon balm which is used not only in perfumery but also in the preparation of spirits such as arquebuse, or liqueurs such as absinthe and chartreuse.