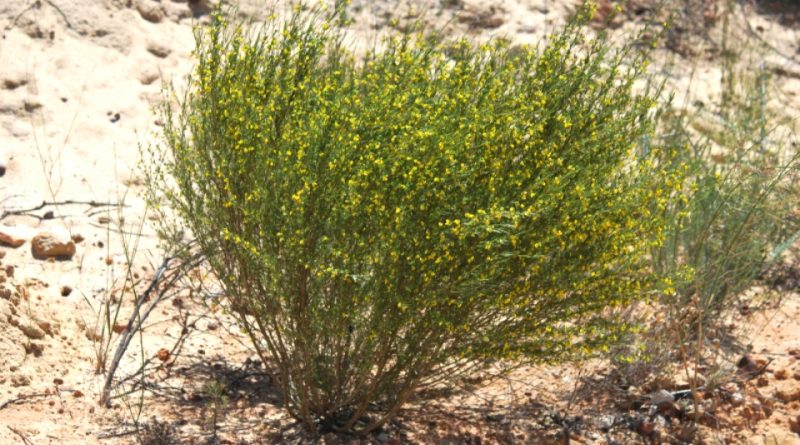 The Afrikaans rooibos or simply rooibos (Aspalathus linearis (Burm.f.) R.Dahlgren) is a shrubby species belonging to the Fabaceae family.

Etymology –
The term Aspalathus was attributed by Linnaeus taking it from the Greek ἀσπάλᾰϑος aspálathos aspalato, a thorny plant mentioned by Theophrastus & al., According to Pliny Genista acanthoclada.
The specific epithet linearis comes from wire line, line: linear, elongated and thin, usually for long and narrow leaves, with almost parallel margins.

Geographical Distribution and Habitat –
Aspalathus linearis, in its spontaneous state, grows exclusively in the mountains of the Cederberg region in South Africa where it is also cultivated for its uses.

Description –
Afrikaans rooibos is a polymorphic species that when it grows spontaneously can have different characteristics depending on the region in which it grows. Some varieties can reach 30 cm in height, while others reach 2 meters.
The varieties that are used for the cultivation of “red tea” have an average size of 1.5 meters in height.
The plant has small yellow flowers that bloom in late spring or near the beginning of the hot summer.
Each flower produces a legume. 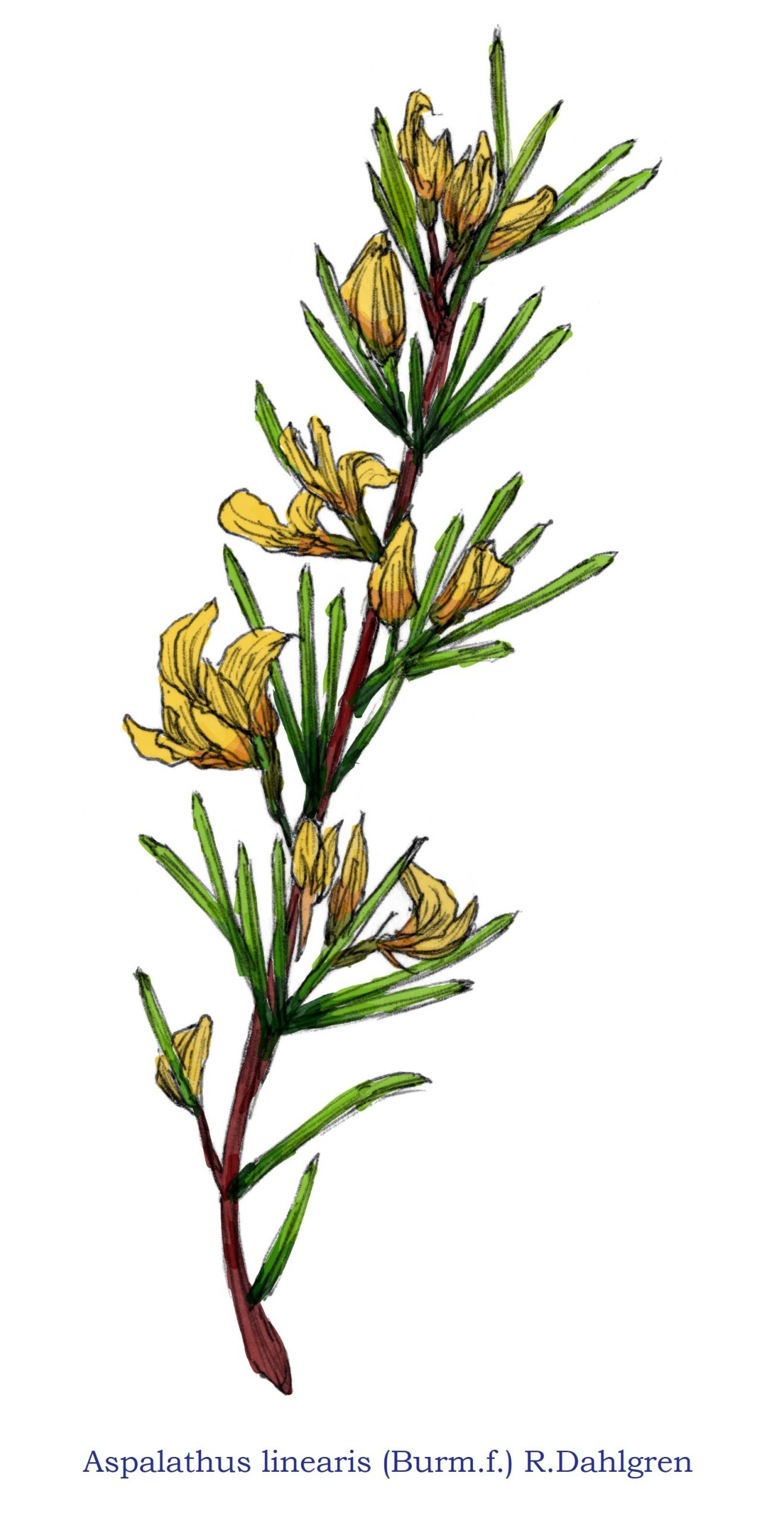 Cultivation –
The rooibos plant is grown in the summer, which in South Africa’s latitude corresponds to the January period.
It is a species that adapts to be cultivated in nutrient-poor soils and in extremely hot climatic conditions.
The plant is grown only in the Cederberg region which is located near Clanwilliam, about 300 km north of Cape Town. The mountain range takes its name from the endangered Clanwilliam cedar (Widdringtonia wallichii Endl. Ex Carrière), which is an endemic tree in the area.

Uses and Traditions –
Rooibos is a plant from which a drink is prepared (called rooibos, Red Bush or even African red tea) obtained from the leaves that has always been used by local people.
The drink is prepared by infusion and is also commercially flavored. It has a light taste that recalls hazelnut and mallow, with a sweet taste, even without the addition of sugar and with a brownish red color.
The leaves of the tree, after harvesting, can oxidize in the sun and this process is popularly called fermentation (although technically it is not a fermentation but it is so called to make an equivalence with the production of tea). This oxidative process is what gives the plant its characteristic “red” flavor and color. There is also an “unfermented” production (ie not oxidized) which is called green rooibos (by equivalence to green tea). This variety is marketed at a higher price than the “fermented” variety and has a characteristic yellowish color and has a large amount of antioxidant polyphenols.
The beginning of the consumption of this drink dates back to the 17th century.
The popularization of this plant is quite recent. After it was scientifically classified in 1772 by the botanist Carl Thunberg, it was studied in depth by Dr. Nortier, a physician and botanist, who was, in fact, the first person to devote himself to his in-depth study.
Nortier, in addition to ascertaining its medicinal properties, experimented with cultivation, since, at the time, it only grew spontaneously.
The drink produced with rooibos, as mentioned, has been used for centuries by the Khoisan people who inhabit the area and who have always known its properties. Dutch settlers from South Africa adopted it as an inexpensive alternative to black tea which was to be transported by ships from Europe. Until the 19th century, however, use by the Dutch was minimal.
In 1904 Benjamin Ginsberg, a South African settler of Russian descent and descendant of a family of tea traders, sensed the potential of the rooibos and began trading with the Khoisan people who collected it. He began selling his “Mountain Tea” to the settlers and soon became the first importer of rooibos using contacts with his family.
In the 1930s, Ginsberg convinced a local doctor to experiment with growing the plant. The attempts were fruitful and allowed Ginsberg to encourage local farmers to start cultivation, in the hope of making a good profit. The first attempt at large-scale cultivation was a disaster due to the small seed size. They are not larger than a grain of sand, and therefore they are difficult to trace and collect. For this reason the price of seeds soon reached 80 pounds per pound, too high for local farmers.
It was at this point that one of the women who worked for Ginsberg found an efficient and original system for collecting seeds. While the others carried a handful of seeds equal to a matchbox, the woman was able to regularly deliver large bags and, therefore, was persuaded to reveal her secret.
While looking for the seeds, she accidentally noticed that the ants were doing the same job. He followed the ants to their nest and, when he opened it, he discovered a deposit of considerable size inside.
Since then, rooibos has become increasingly popular in South Africa and has also started to be appreciated in the rest of the world.
Aspalathus linearis leaves, in their fresh state, contain a high content of ascorbic acid (vitamin C) which, however, is lost when transformed into tea.
The leaves are caffeine free and contain many antioxidants, vitamin C and minerals, including magnesium, calcium, phosphorus, iron, fluorine, potassium.
The tea obtained from rooibos therefore does not contain caffeine and contains low levels of tannin compared to black tea or green tea.
The plant contains polyphenols, including flavanols, flavones, flavanones, dihydrocalcones, aspalatin and notophagins.
The processed leaves and stems contain benzoic and cinnamic acids.

Preparation method –
The leaves of the rooibos, after harvesting, are minced, fermented and dried. The drink, which is brownish red in color, is prepared by infusion, with slightly longer times than tea. In South Africa it is used to drink it with milk and sugar, while elsewhere it is drunk without. It is also commercially flavored. It has a light taste that recalls hazelnut and mallow, with a sweet taste, even without the addition of sugar.
The preparation of this “South African red tea” can take more than five minutes to prepare the infusion. In some South African delicatessens a variety called espresso rooibos is sold which is produced similarly to espresso.