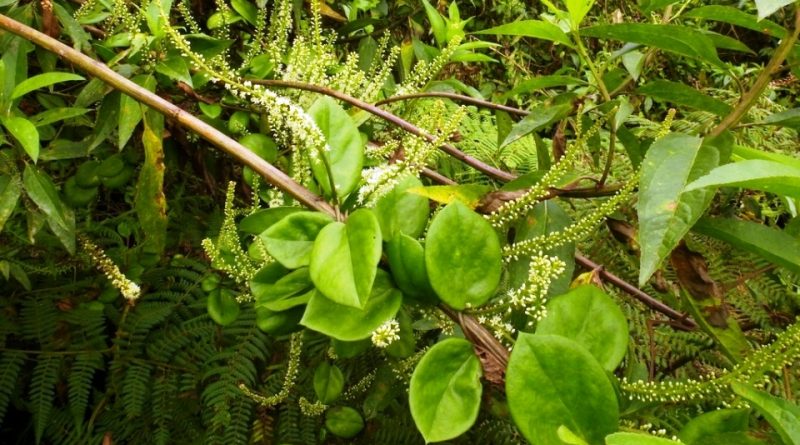 Systematic –
From a systematic point of view, it belongs to the Eukaryota Domain, Kingdom Plantae, Subregion Tracheobionta, Division Magnoliophyta, Class Magnoliopsida, Subclass Caryophyllidae, Order Caryophyllales, Family Basellaceae and therefore to the Genus Anredera and to the Species A. baselloides.
The term is synonymous:
– Boussingaultia baselloides Auct. not H.B.K ..

Etymology –
The term Anredera is of uncertain origin, most believed the dedication to a certain Anreder whose identity is unknown; for others from the Spanish term enredadera convolvulus, reference to fickle bearing.
The specific epithet baselloides comes from the ancient Greek –oides, εἶδος (eîdos, “form, similarity”) and basella; similar to basella.

Geographical Distribution and Habitat –
Anredera baselloides is a plant native to Ecuador and Peru and is naturalized in Bermuda, the Dominican Republic, Florida and Sri Lanka.
Outside these areas it is also present in South Africa while it is considered a pest of some ecosystems in the Dominican Republic and a weed in Sri Lanka, where it is affecting tea plantations, and in other parts of the world.
Within its territory of origin, this plant grows in a semi-dry spot or in some more humid forest in the Andes chain in Ecuador and Peru at an altitude of 1,500 – 3,000 meters.
Outside these areas, it can be found naturalized along the railway embankments in Florida (USA) and in wooded areas, forest edges, riparian areas, desolate areas, disturbed sites and gardens in the Dominican Republic. 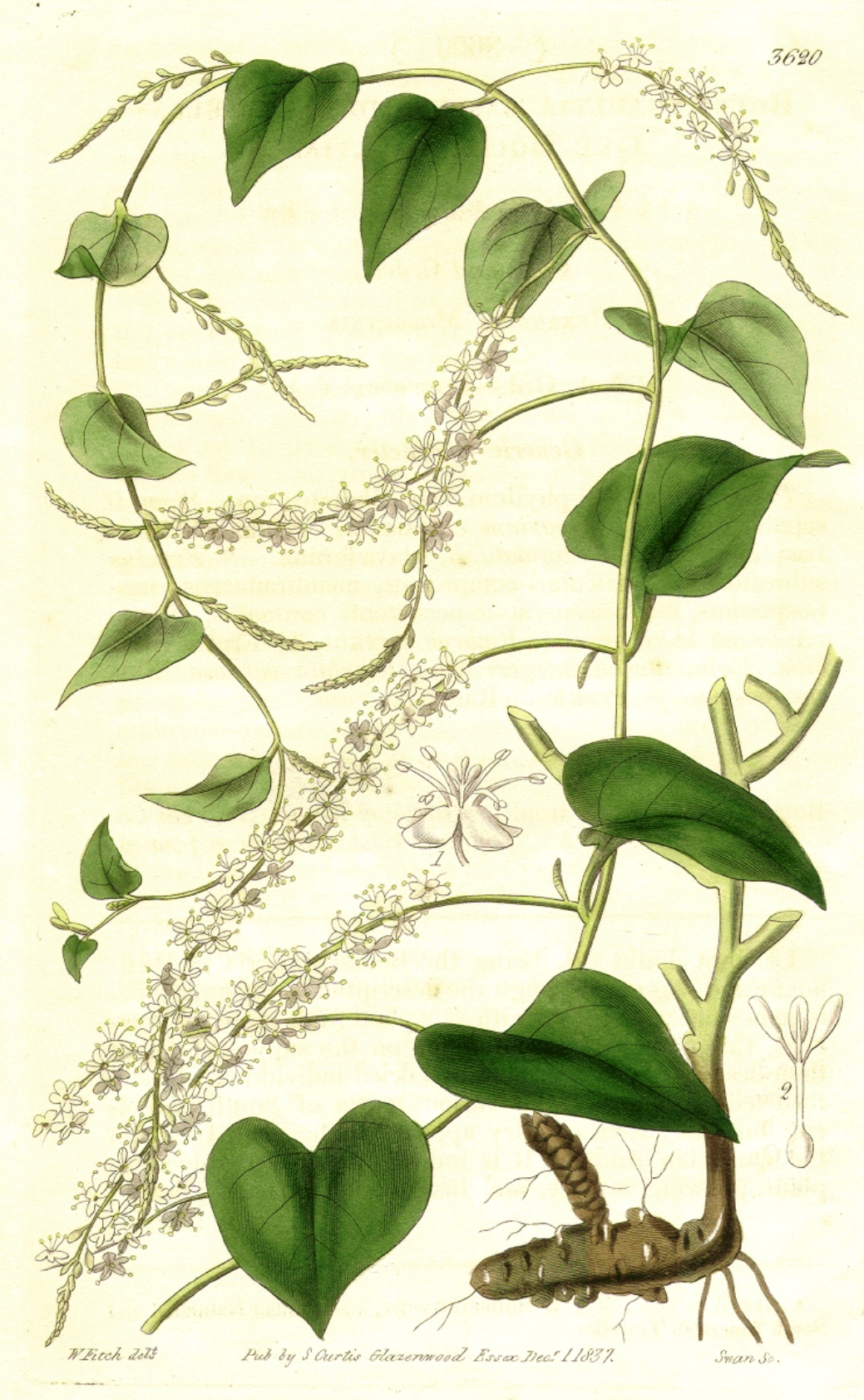 Description –
Anredera baselloides is a perennial herbaceous climbing plant with tuberose root that produces annual stems that stretch on the ground or twist on other plants to support themselves.
The leaves of 2-8.5 × 1-5 cm are elliptical, rounded to cuneate, with acute or short sharp apex.
The inflorescences are 4 – 25 (35) cm long, not branched or rarely with few (many) branches, often with a rather robust axis. The pedicels are 1-3 mm long.
The flowers are bisexual, with sepals of 2.5-3.5 × 2-2.5 mm, generally shorter than the petals, which rarely equal them in length, patinated, ovate to elliptic, during the anthesis of whitish or cream-colored which then turn brown. The petals are 3-4 × 1-2 mm, uniform, more or less patent at the beginning and more or less erect afterwards, with an elliptical shape. The anthers are sometimes pale reddish in color. The stylus is one and undivided.
The fruit is completely or vaguely surrounded by persistent, more or less erect petals.

Cultivation –
Anredera baselloides is an invasive succulent plant capable of suffocating and destroying native vegetation. The species has climbing stems that can completely envelop the host plant, reducing the penetration of light and ultimately killing the underlying plants and preventing the germination and regeneration of native plants.
the plant spreads by seed, but apparently the production of fruit outside its area of ​​origin is rare. Here, it is mainly spread by people both intentionally and unintentionally.
This species comes out of cultivation spreading vegetatively through rhizome parts and stems that separate from the mother plant. Plants can also spread with garden waste.

Uses and Traditions –
Anredera was probably introduced into the Dominican Republic to be used as an ornamental plant for the decoration of fences and walls. Subsequently, it escaped cultivation and became invasive, although there is no information available on the introduction date on this island. It is spreading rapidly on this island and is competing for light, space and water, suffocating and replacing native vegetation. Once established it is very difficult to control because of its aggressive nature.
In Florida, it was first reported as naturalized and locally abundant in the Tallahassee area in 1993.
Among similar species, A. baselloides can be confused with the similar and equally invasive species A. cordifolia. However, the A. baselloides does not produce specialized aerial tubers along the typical stems of A. cordifolia.
At the level of use, the edible leaves and roots of this plant are sometimes collected in nature for local use, so much so that in some areas it is occasionally cultivated for its edible leaves.

Method of Preparation –
Both the roots and the leaves of this plant can be consumed for food use.