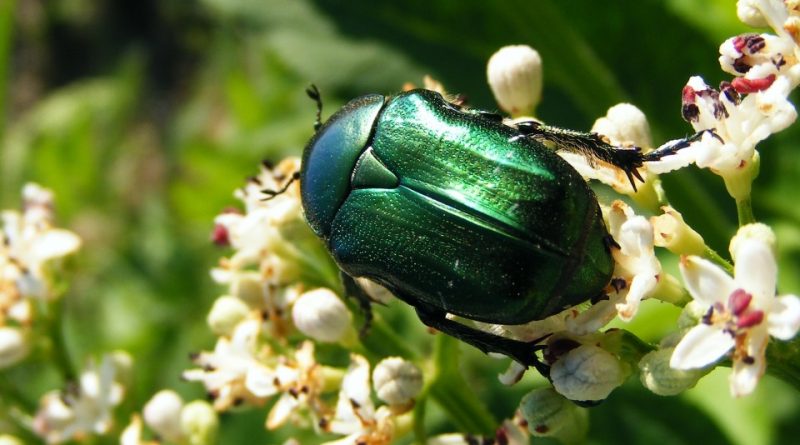 The rose chafer (Cetonia aurata, L. 1758) is a beetle belonging to the Scarabaeidae family.

Geographical Distribution and Habitat –
Rose chafer is a very common insect in an area that includes central and southern Europe, northern Africa and in some areas of Asia; it is easily found in the period from May to July, up to some presences in September and on sunny days. It is present on Rosaceae and other fruit and ornamental plants.

Morphology –
Cetonia aurata is a beetle that reaches an average of 18 mm in length and oscillations between 15 and 20.
It is recognized for its characteristic metallic color, emerald green which can take on bronze, purple, yellow, blue-black or copper shades interrupted by white muskets on the elytra and, occasionally, on the pronotum.
The ventral part has a generally coppery color, but can be presented with the same color tones as the dorsal part.
The elytra are chitinous and cover the wings, used for flight, which are everted from a lateral groove allowing the insect to fly easily without lifting the elytra as it happens in other beetles.
This beetle is equipped with a chewing mouthparts without the strong jaws which are present in carnivorous species; the apparatus is composed of lips, jaws, palps which, stuck together, allow chewing and use only to keep plant parts.
The head is small with two large, multifaceted black compound eyes.
There are also a couple of short and lamellar antennas.

Aptitude and biological cycle –
Cetonia aurata is an annual cycle beetle, which overwinters as a mature larva, or as an adult to then appear in April-May, at the time of flowering.
The biological cycle begins with the female who lays, after mating, in groups of eggs (6 to 40) of spherical shape in humus-rich substrates, among the woody debris of old decaying dead trees, especially poplars and larches, or in the leaf decomposition litter that is prepared to obtain organic loam.
When the eggs hatch, glabrous larvae emerge, whitish in color, with yellow spots near the tracheal spiracles; these have strong jaws inserted on the chitinous and yellow cephalic shield.
The larvae are xylo-detrityphagous, that is, they feed on organic material using cellulose, which metabolize with enzymatic processes produced by flagellated bacteria and protists that live in the digestive canal of the larvae in symbiosis.
Due to the low nutritional power of the woods and humus and in conjunction with adverse microenvironmental conditions, the larvae can prolong the activity even for a few years, so that the insect, before reaching the final development, must employ considerable quantities of organic substances.
The larvae however do not feed on roots but contribute to the demolition of the plant material in humus which is thus used above all by the young seedlings present in their habitat.
After the larvae have turned into pupa, a couple of weeks pass before the adults emerge that feed for a period of 4-6 weeks.

Ecological role –
Rose chafer is an insect that in the adult state feeds on nectar and sugary substances, also acting as a good pollinator. Occasionally they can cause damage only in some types of flowers (such as roses) that have reproductive organs hidden and inaccessible. In this case, to reach the nectar they ruin the rest of the flower, also because they are quite bulky. They are also attracted to the sap that oozes from the injured broadleaf trunks.
These insects do not adopt mimetic behaviors but enter into tanatosis if disturbed and are clearly active in full sun. Uric and formic acid impregnate the internal organs and in defense these acids are also excreted externally from the anal cavity, so that using a chemical strategy, the insect is nauseating and not at all attractive to predators.
This beetle is however controlled at the larval level by some natural parasites that keep the population stable: among these we remember some mushrooms of the genus Sporotricum, Hymenoptera Scolidi and numerous diptera.
The intervention against this insect is almost never justified and in any case the interventions must also be evaluated according to the presence of the pollinating insects and the Hoverflies Diptera, frequent visitors of the flowers.
Recall that Cetonia aurata is one of the most important symbols of Egyptian culture, where it was depicted with wings folded to represent the neophyte and with open wings to symbolize the initiate who took flight to knowledge.
In many temples, the phrase was also reported: “I am Kepher the disciple and when my wings open, I am reborn.” The “Kepher” hieroglyph means “succeeding in being” which represents the emblem of the resurrection and renewal.
Moreover, for the fact that this beetle carries a dung ball between its legs, it symbolizes the Sun which is renewed every day. This symbolic interpretation is also present in China.