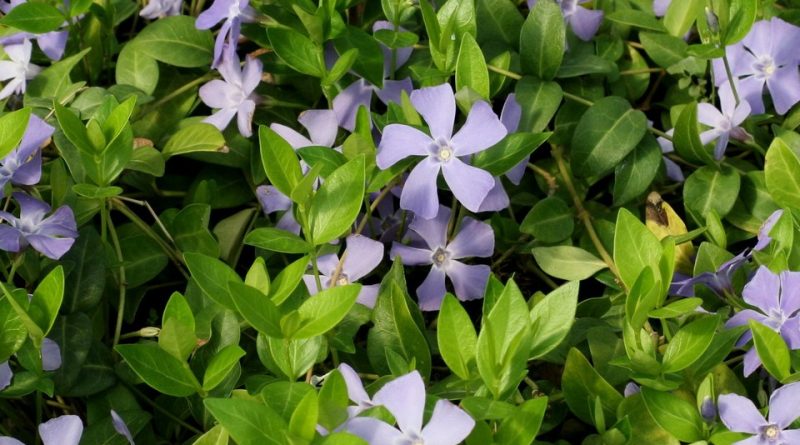 The lesser periwinkle (Vinca minor L.) is a perennial herbaceous species belonging to the Apocinaceae family.

Systematics –
From the systematic point of view it belongs to the Eukaryota Domain, United Plantae, Magnoliophyta Division, Magnoliopsida Class, Gentianales Order, Apocynaceae Family, Rauvolfioideae Subfamily, Vinceae Tribe, Vincinae Sub-tribe and then to the Genus Vinca and to the Species V. minor.

Etymology –
The term Vinca is of uncertain etymology: from pervínca (from pervínco stravincere, s’intende the diseases), or from pervínco to cling (with the stolons).
The specific epithet minor is the comparative of párvus: minor, smaller than other congener species.

Geographical Distribution and Habitat –
Lesser periwinkle is a plant native to central and southern Europe and the tropics.
Its habitat is represented by the undergrowth, especially under the oaks, where it forms extensive evergreen carpets, but it is also common along the edges of roads from 0 to 1300 m. s.l.m ..
It is a fairly widespread plant, of which some cultivars are cultivated for ornamental purposes, above all for creating borders. 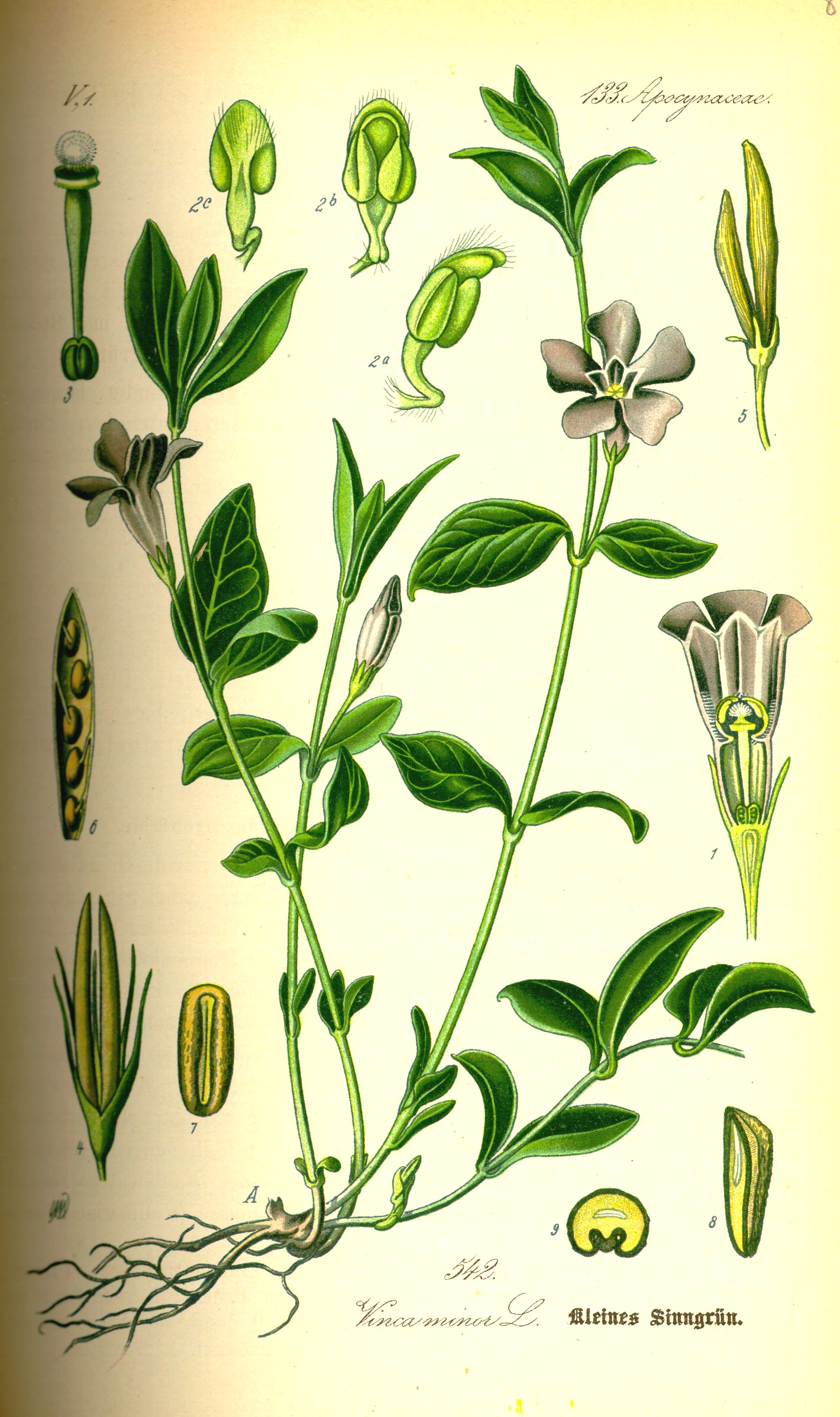 Description –
Vinca minor is a species with creeping and ground cover, 10–15 cm high, which tends to form large carpets of rather slender creeping stems with a maximum height of 18 cm that produce roots at the nodes and bear opposite, elliptical, leathery and shiny leaves on the upper side of intense and glossy green color.
The flowers, 2 cm wide, are of a blue-violet color, called blue-periwinkle in fact, which bloom on peduncles of 1 – 1.5 cm to the axilla of short ascending branches. There are also varieties with white, bluish, purple and wine red flowers.
The corolla is composed of 5 petals with the apex truncated obliquely. The anthesis is between March and May, with a possible second flowering in autumn.
The fruit is formed by two follicles, similar to a capsule, which open by means of a lateral slit; they are cylindrical and sharp at the apex and contain some oval-oblong black seeds.

Cultivation –
The lesser periwinkle is a plant of easy cultivation that needs great brightness and air, both in the summer and winter season. In summer the ideal temperature fluctuates between 21 degrees and 29 while in winter it is preferable to maintain it at 16-18 ° C. Below 15 degrees the plant begins to have problems. In the summer season it is advisable to keep the plant outside, in full sunlight. Together with an adequate level of humidity, this will ensure a generous flowering. Vinca is generally treated as an annual plant, that is to be eliminated in autumn, however if, in winter, it is kept indoors, exposed to sufficient light, it can survive very well. The periwinkle is planted in the months between September and March, on well-drained soil and in a sunny or partially shaded place.
As for the substrate, this plant needs good fertility, so it must be well drained and have a slightly acid reaction. It will be composed of leaf mold, woodland and peat. If cultivated in pot, on the bottom of this container, preferably in terracotta, it will be good to place small pieces of earthenware to avoid water stagnation. Repotting takes place once a year between January and March in pots of ever slightly larger diameter. It is necessary to water the plant a lot from the spring season and from mid-autumn. in full autumn and winter season you need to water just enough to keep the soil moist. In the vegetative period, from spring to autumn, the plant must be fertilized every 15 days. In the rest of the year, instead, fertilization must be stopped. The fertilizer must be rich in nitrogen, potassium and phosphorus. Pervinca also needs microelements such as iron, zinc and copper.
For some details of the cultivation technique, see the following sheet.

Uses and Traditions –
La Vinca minor, at a popular level, has been used for the aerial parts that are used to improve blood circulation.
It was once used in therapy for the curious property (all to be tried) of blocking the secretion of milk in mothers. The aerial parts contain relatively simple indole alkaloids (vincamine) and used in medicine for their cerebral vasodilatory properties. The European species of Vinca do not contain dimeric alkaloids, which are contained instead of the vinca of Madagascar (Vinca rosea or Catharantus roseus) which are widely used as anti-cancer agents. There are no known periwinkle poisonings in humans, also due to the relatively modest concentration of alkaloids in the plant.
It should be remembered that the active principle vincamine performs a demonstrated, nootropic activity on cerebral circulation.
Other substances contained are: Indole alkaloids, phytosterols, saponins, flavonoids, tannins.
Remember that all parts of the plant are poisonous.
This plant has pharmaceutical properties: Diuretic, astringent, digestive, hypotheensive. For external use it has anti-inflammatory properties.
The tradition also associates the concept of fidelity in friendship and tenacity of memory with periwinkle flowers and evergreen leaves. It was considered a symbol of virginity and it was customary to spread the flowers in front of the spouses or to place four small bunches on the corners of the marital bed.
Of the plant, for various uses, the part that is used is the aerial part.

Preparation Mode –
As for Vinca major also for Vinca minor the leaves can be used against chronic catarrh, enteritis, diarrhea, hemorrhoids, leucorrhoea; remembering however that for the content of vincristine it is to be considered toxic plant in all its parts and therefore to be used under careful medical prescription.