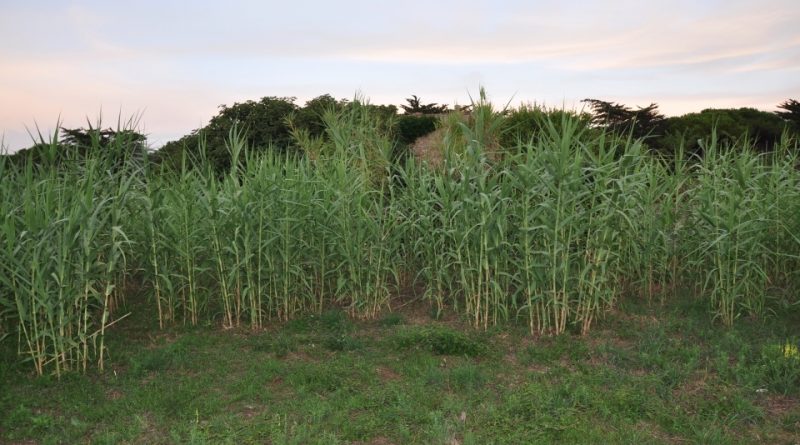 The giant cane (Arundo donax L., 1753) is a perennial herbaceous species with long, hollow and robust stem, from the Poaceae family.

Etymology –
The term Arundo comes from the Latin arúndo, -dĭnis which means cane in general. The specific epithet donax derives from δόναξ dónax Greek name of a type of reed.

Geographical Distribution and Habitat –
The giant cane is a species with origins in an area that extends from the Mediterranean to the Middle East to India; at present this poacea can be found both planted and naturalized in the temperate and subtropical regions of both hemispheres.
In Italy it is widespread throughout the territory and in particular in the lowland and submontan areas up to about 700 m above sea level even if it is not considered a spontaneous plant despite the propagation, in some areas, is very pronounced.
Its habitat is that of wet soils of riparian environment, along the banks of rivers and ponds but also on the margins of cultivated fields and on sand dunes, even near the sea where it tends to form dense spots. 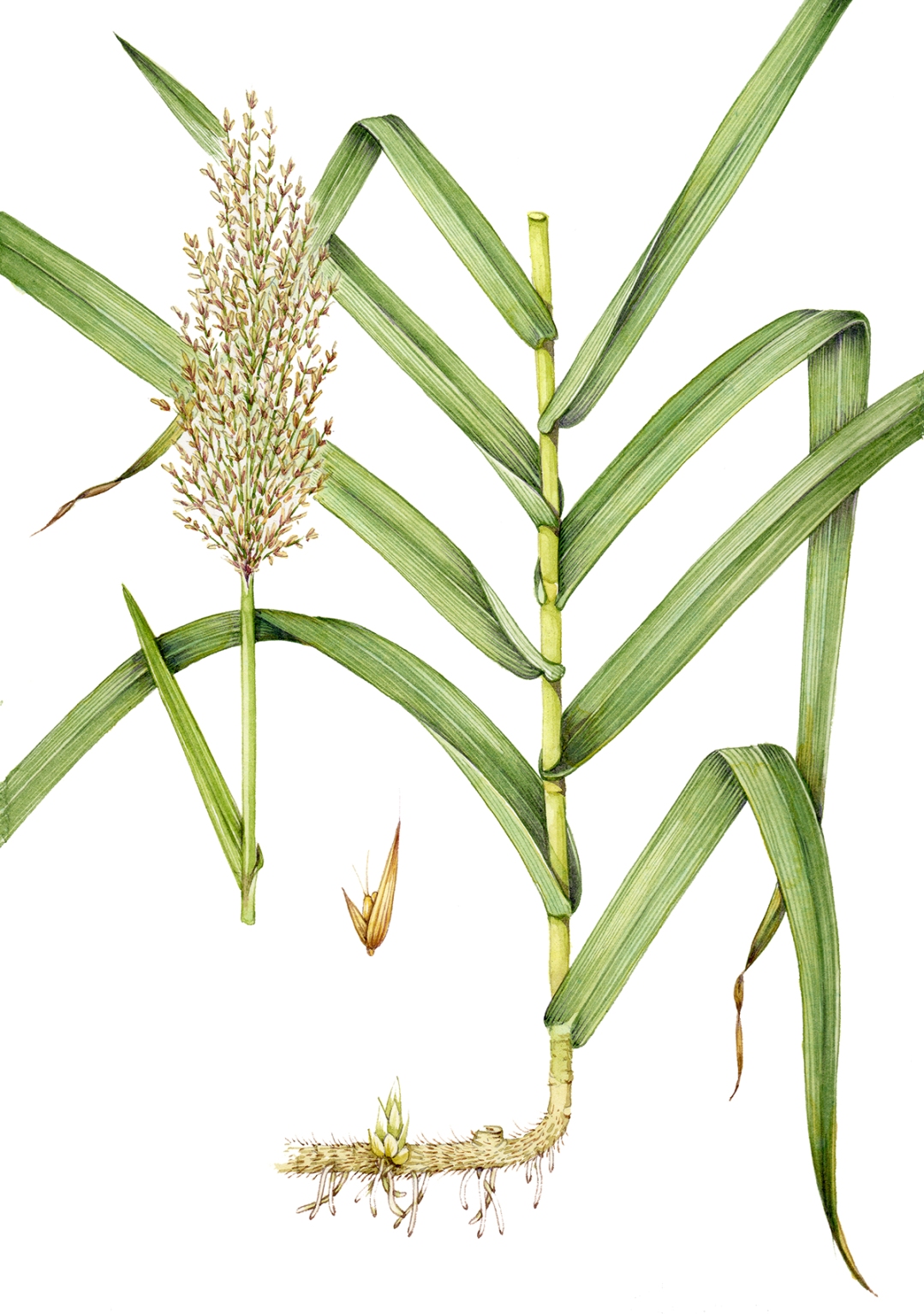 Description –
The Arundo donax is a plant characterized by an hypogean part composed of a rich system of rhizomes, from which the roots depart, and from an epigeal part, characterized by tall and lignified stems (culms).
The rhizome is woody, with dimensions linked to the pedoclimatic conditions, from which numerous roots spread all around.
The rhizome also has primary and secondary buds from which the stems and extension buds develop, from which new rhizomes grow with vegetative growth.
This species is the largest among the European reeds; it can reach from 6 to 10 m. of height. The stems, called culms, are cables with a diameter of 2–3 cm. The leaves are alternate, gray-green in color, 30–60 cm long and 2–6 cm broad, with a lance-shaped, tapered at the tip, with a tuft of woolly hair at the base. There are two varieties: A. donax variegata and A. donax versicolor of which the second is considered more attractive due to its mottled color.
The flowers are monoecious, the seeds are rarely fertile and reproduction occurs mostly by vegetative means, through underground rhizomes. The latter are woody, fibrous and form extensive knotty carpets that penetrate up to a meter deep into the ground.
Pollination is anemogamous and flowering between September and October with fusiform feathery panicles, pale green to purplish, 40–60 cm long and with vertical bearing.
However, the common reed, in our climates, does not ripen the caryopsis and the rare seeds produced do not give rise to germination. For this reason, the propagation of the species takes place exclusively via vegetative (agamic), through stem cuttings or propagation of rhizomes.

Cultivation –
For the cultivation of the giant cane it must be taken into account that it is a plant that prefers warm and temperate zones while it is rather sensitive to very low temperatures which are harmful above all for the vitality of the rhizomes.
The species is not very demanding in terms of soils even if it prefers those with an alkaline reaction of the substrate, even with the presence of calcium., Which grows in optimal conditions in the fresh ones of the plain that have a good circulation of water and air and have a good availability of water .
With regard to water requirements, the depth and power of the root system are such as to make the crop able to make use of aquifers placed at depths greater than one meter. The common reed is considered a crop with a low need for water and is able to optimize its efficiency in the case of situations of water stress.
For the planting of the giant cane, the period is spring, using the rhizomes with dormant bud, or during the vegetative season if the vegetating bud internodes are used, with a maximum density of about one plant per square meter and sixth variables depending on the position of the land, exposure to light and collection logistics.
In cultivation for industrial purposes this is totally mechanized, from planting to harvesting.
In the first year, a dry matter production is obtained up to 50% of the plant’s potential, which is reached already in the second year.
A common cane cultivation can provide about 40 t / ha of dry matter annually.

Uses and Traditions –
Arundo donax is a plant whose cultivation has been known since ancient times throughout Asia, southern Europe, northern Africa and the Middle East.
The ancient Egyptians used the leaves of this plant to wrap the remains of the dead. Due to the high density of individuals that characterizes its growth, it has often been used to create windbreak hedges.
Due to its very high growth rate, it is a particularly suitable species for the production of biomass for fuel use and also as a source of cellulose for the paper industry.
An important feature in the advancement of the rhizomes is that it is absolutely local, so that the colony of stems advances like an oil stain, to extend its surface. It also verifies that portions of stem and rhizome less than 5 cm long and containing at least one node sprout easily. This vegetative diffusion is an effective adaptation to the occurrence of floods, so that when these events occur, the single individuals of A. donax can break, spreading fragments capable of sprouting and colonizing new downstream areas.
In conditions of presence of superficial layers and of flowing water the common reed is able to grow in dense spots that can suffocate other plants and prevent them from spreading.
The presence of Arundo donax spots in the spontaneous state always indicates wealth of water in the subsoil, and depth of the soil itself. Therefore, even if it adapts to poor soils, the presence of dry and deeply reduced soils is directly indicated by the reduced vigor of the culms.
Recent applications have highlighted the capabilities of A. donax for the environmental remediation or decontamination of sites heavily polluted with organic substances or heavy metals through their absorption, degradation and stabilization as an effective and sustainable solution from an economic and environmental point of view. Furthermore, the giant cane has the ecological advantage of not being appetite by animals, and therefore avoids the spread of toxic and persistent substances in the food chain.
Another interesting application in the use of the Arundo donax is that for the phyto-purification and for the stabilization of sloping lands in naturalistic engineering works.

Preparation Mode –
The common cane is a plant of interesting uses for industrial uses, such as biomass, for ecological and naturalistic purposes and has some applications for pharmaceutical purposes.