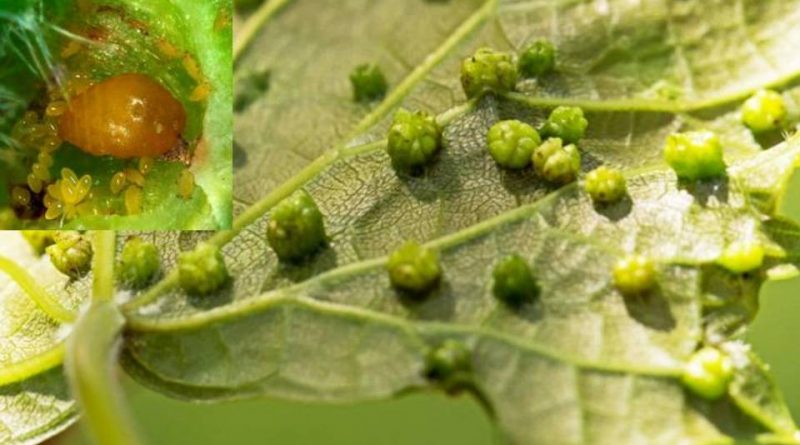 Geographical Distribution and Habitat –
Vine phylloxera is an aphid associated with the species of the genus Vitis which attacks the roots of European species (Vitis vinifera) and the aerial apparatus of American ones (Vitis rupestris, V. berlandieri and V. riparia).
It is a phytophagous originating from North America, subsequently appearing in Europe in the second half of the nineteenth century and today widespread in all the countries of the world where viticulture is present.
Its presence causes serious damage to the roots in a short time and the consequent death of the plant attacked, with the exception of some American vines.

Morphology –
Daktulosphaira vitifoliae is an insect with a high polymorphism which, for adult forms, can be classified according to the following types:
Foundresses or gallecules: these are the atherous females born from the amphigonic eggs. They settle in the host leaf and reproduce by parthenogenesis;
Neogallecole gallecole: they are represented by the atterous females, born from parthenogenetic eggs deposited by the foundresses or from other gallecules. They live in the same environment as the founder and reproduce by parthenogenesis;
Neogallecole radicicole: these are the atherous females, born from parthenogenetic eggs deposited by the foundresses or from other gallecules. They migrate on the roots where, by parthenogenesis, they give the generations of radicogeneous virginogenic lines;
Neoradicicole radicicole: represented by the athera females, born from parthenogenetic eggs deposited from the neogallecules radicicole or from other neoradicicole radicicole;
Sessupare: these are the winged females born from parthenogenetic eggs laid by the radicicole and which by parthenogenesis will produce only amphigonic females (sessupare ginopare), only amphigonic males (sessupare andropare) or amphigonic of both sexes (sessupare amphipare). After migrating to the aerial part of the vines they reproduce by parthenogenesis. In the phylloxera the sessupare are predominantly gypsum or andropare, but also the sessupare amphipare may appear to a lesser extent;
Amphigonics: are the males and females atthers that are born from parthenogenetic eggs laid by the sessupare. These reproduce via sexual contact (amphigony). After mating, the females lay the durable egg, also called the winter egg.
A further classification, independently of the generation, defines the forms that live on the leaves as gallecules and those that live on the roots as radicicole.
The gallecule forms have a body length of about 1 mm, of greenish-yellow color and have a very fine point-like sculpture scattered over the entire dorsal part of the body. The buccal apparatus has a relatively short rostrum.
The radicicole, also of yellow-greenish color, have the same dimensions, but the exoskeleton sculpture is formed by small tubercles lined up on longitudinal series. The rostrum is also longer than that of the gallecules.
The sessupar forms are winged and about 1.5 mm long (including the wings), with a yellow-ocher body and black mesothorax. The wings are membranous, folded horizontally along the abdomen in the resting position; the veining is typical of phylloxerids, with the large longitudinal vein running parallel to the costal margin up to the stigma and two branches that innervate the remiging region, of which the posterior one, interpreted as cubit vein, is in turn divided into two branches.
Amphigonics are athers and much smaller (about half a millimeter) than the other forms, with a light yellow body.
The codicola and the siphons, which are the organs typically found in the Aphids, are absent in this insect.

Attitude and biological cycle –
The biological cycle of the Phylloxera of the Vine, being a monoico and heterotope insect, develops totally on the American vine, while on the European vine it completes an anolocycle with only generations of roots.
In the complete cycle on the American vine the aphid hibernates at the egg stage, on the branches and on the stems; in spring, the parthenogenetic females are born between April and May, which are the foundresses, which sting the young leaves, causing the formation of galls, where inside new parthenogenetic females will develop and continue their cycle on the leaves, producing new galls (chevron shapes).
Parthenogenetic females always come out of these galls:
– some, with the shorter rostrum, which will be destined to continue the foliar generations (from 6 to 8);
– others, which have the longest rostrum, will leave the leaves and move to the root system, where the generations (8 to 10) of the radicicole begin.
These generations take place simultaneously with those of the gallecules; each generation of gallecules, subsequent to the second, gives rise to long-rostrum bottoms that will migrate to the roots.
Arrived at the end of the summer, the last generation of radicicole will give rise to sexed-winged females that migrate towards the aerial apparatus, where they will originate the amphigonics; these in turn mate and produce the wintering egg.
On the European vine, whose leaves do not form enough galls to allow the foundations of the gallets to complete their development, the Daktulosphaira vitifoliae establishes itself almost exclusively at the root level, carrying out anolocicles or radiciculus paracicles.

Ecological Role –
The phylloxera is an insect whose damage is determined by its punctures on various organs of the Vine:
– on the roots, it causes the formation of knotty galls, even of considerable size, and loss of the same of absorbent capacity;
– on the leaves, where roundish and wrinkled galls appear that erupt towards the lower page, giving rise to a knotty and irregular surface.
The galls are the shelter where the youth stages complete their development.
The damage of course, according to what has been said about the biological cycle, differs depending on the type of Vine attached:
– if it attacks the American Vine, there is a very limited radical damage because the roots of this vine are not very sensitive and reactive to phylloxera bites; unlike the leaves that are very reactive producing a large quantity of galls;
– if it attacks the European Vine, the damage is of greater proportions since the roots of this species are particularly sensitive and produce showy galls if spiked by the insect. These galls degenerate over time causing a breakdown of the radical tissues which compromises their absorbent function. The leaves, on the other hand, do not react to bites, so the formation of galls is not very significant or completely absent.
As seen, the fight against the phylloxera of the vine is based, for many years now, following a strict propagation criterion, that is with grafting of European vines on American vine rootstocks.
Although these precautions seem to have given certainty to the fight against Daktulosphaira vitifoliae, in the last few years there has been the appearance of foliar symptoms (development of gallecules) on some European vines of the Cabernet, Pinot, Merlot, Verduzzo and other vines, especially in wine-growing areas of Northern Italy.
This phenomenon should not be underestimated as it would seem that the aphid is able to complete the cycle with generations of gallecules and radicicole, respectively on European plants and on American rootstock. This evolution must be kept under control as its further negative evolution could lead to obvious phenomena of degradation of the entire world viticulture.
Other types of struggle such as the chemical one can be taken, but with the necessary ecological precautions, only for the nursery type plants, where the mother plants of the American rootstocks are bred.